Promoter arsRp is associated with the dimer of ArsR for the arsenic induced transcription of genes involved in arsenic efflux (arsR, arsB and arsC, which is present on the genome of Escherichia coli str. K-12 substrain MG1655). The sequence shows the typical -10 and -35 region of the promoter and can be found through the following link. A second region, located at -41.5 from the transcription start site, is thought to bind dimeric ArsR. Upon binding of arsenic, the dimer dissociates and allows the RNA polymerase space to attach itself, and can also be found in the same link.

Arsenic is an element less essential for the functioning of cells, and its survival. Low concentrations can have devastating effects, interfering with processes in the cell. Because of the similarity to phosphate, sometimes arsenate is mistaken for phosphate, which is how it is introduced into living organisms, including E. coli, by the phosphate uptake system. Other molecules such as As(III) can also be introduced into the cells by various membrane transporters. Cells have effective defenses to deal with elevated levels of arsenic variants, which are under the control of metal sensitive promoters. The transcription is mostly regulated by proteins binding to, or releasing from the promoter site, like ArsR.

The presence of all genes and promoters on the chromosome of E. coli makes the use of the arsRp for induction of the GVP cluster relatively straith forward.

Upon induction of the ArsR promoter, expression of RFP increased, as seen in figure 1. From the enhanced fluorescence a value for the relative promoter units (RPU) was calculated according to the formula from Kelly 2009 (formula 9). Thereby an induction of 2.3 RPU was found, which was in consensus with the promoter activity found for arsenic metal sensitive promoter (used in expression of MTs) (personal communication, Dr. D. Wilcox). The arsenite uptake in ‘’E. coli’’ with J61002-BBa_K190015 over time was measured using the arsenite uptake assay, this was done upon incubation with 10µM NaAsO2. This data was multiplied by the following ratio: As(III) uptake upon induction for 1hr with 100µM As(III) devided by As(III) uptake upon induction for with 10µM As(III). The increasing intracellular concentration is shown in figure 2. 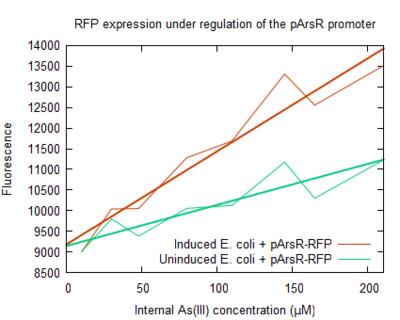 Figure 1: Increase of fluorescence (RFP = 590nm) upon induction of the pArsR promoter with 100uM As(III). The data was a bit noisy, therefore a trendline was used to calculate the relative promoter units(RPU). 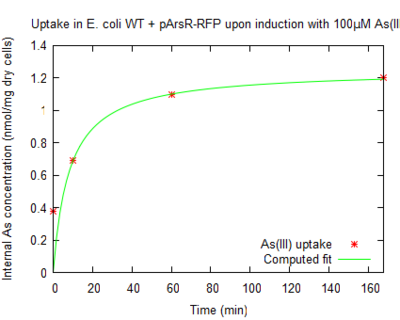 Figure 2: The increase of RFP over an increased intracellular As(III) concentration. The internal arsenic concentration upon induction of cells with 100uM As(III), was calculated by extrapolating the the As(III) uptake curve (incubated 10uM As(III) over 1hr) of E. coli with pArsR-RFP (in J61002). The trendline ((0.152465*x)/(1 + 0.121918*x)) was used to calculate the internal As concentration at the time point used for the fluorescence measurement.

The BBa_K190015 promoter was not very effective in transcription repression as evidenced by using it in the construct BBa_K3380603. Therefore iGEM team Edinburgh 2020 decided to try and increase the transcription repression with ArsR transcription factor. We designed a promoter with the ArsR binding site placed after the promoter [BBa_K3380103]. The newly designed promoter was tested in a Cupriavidus Metallidurans cell free extract expressing iSpinach (BBa_K3380150) fluorescent RNA aptamer flanked by F30 tRNA scaffold (BBa_K3380101-BBa_K3380102). Figure 3 shows the effect of As (III) addition to the BBa_K3380600 construct under the BBa_K3380103 promoter. 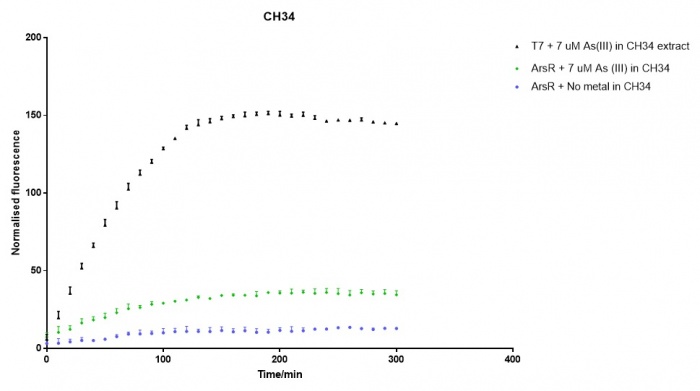