xylE is from the Pseudomonas putida TOL (naphthalene and xylene degradadative plasmid) pWW0. This gene encodes the enzyme catechol-2,3-dioxygenase (metapyrocatechase), which converts catechol to the bright yellow product 2-hydroxy-cis,cis-muconic semialdehyde. This is a useful reporter gene; colonies or broths expressing active XylE, in the presence of oxygen, will rapidly convert catechol, a cheap colourless substrate, to a bright yellow compound with an absorbance maximum around 377 nm. The part includes the native ribosome binding site, so simply has been added to the glucose-repressible promoter of cstA. This allows for characterisation of PcstA over a range of glucose concentrations.

The focus of the Lethbridge 2010 project is to decrease the toxicity of tailings pond water through bioremediation. We are specifically interested in the degradation of the toxic molecule catechol into 2-hydroxymuconate semialdyhyde (2-HMS); a bright yellow substrate that can be metabolized by the cell. This conversion is accomplished by a protein called catechol 2,3-dioxygenase (xylE).

BBa_K118021 was transformed into Escherichia coli DH5α (E. coli) cells using our transformation protocol. We confirmed that the cells hosted the plasmid containing the BBa_118021 part and we begun experiments to characterize catechol degredation.

In our first experiment we grew a 5 mL culture of our engineered E. coli cells in M9 minimal media overnight. The cells were spun down at 14000 rfc for 2 minutes. We raised the catechol concentration of this solution to 100 mM, the solution immediately turned bright yellow.


In our second experiment we wanted to measure the absorbance of 2-hydroxymuconate semialdehyde over time. We grew a 5 mL culture of our engineered E. coli cells in M9 media overnight. 1 mL of the cell solution was removed for analysis. Catechol was added to a final concentration of 100mM in the cell suspension. Immediately the formation of 2-HMS was tracked. The formation of 2-HMS can easily be tracked, as it absorbs light at 375 nm.


Results of the Bradford Assay

Protein mass of S30 and S100 (and S30 Control/S100 Control) extracts were normalized to between 2µg and 10µg in 1mL of either 20mM Tris pH 8.0 or double distilled water. Catechol was added to normalized cell extract at a final concentration of 0.05 mM. The subsequent production of 2-HMS was observed as a function of time by recording absorbance at 375 nm over the ten minute period immediately following the addition of catechol.

Figure 3 displays that catechol 2,3-dioxygenase can degrade catechol in vitro, producing 2-HMS. We also observe that when approximately twice the amount of S30 extract is added to an excess catechol solution, production of 2-HMS is increased approximately twofold. This suggests that the enzyme (rather than substrate) is the limiting component in catechol degradation by catechol 2,3-dioxygenase. This result corresponds with our hypothesis that the catechol 2,3-dioxygenase active site iron is reduced upon catalysis, rendering our enzyme inactive. The samples in Figure 3 were carried out in double distilled water. However, duplicates of the readings were measured in a buffer (20mM Tris pH 8.0). We do not observe a significant difference in 2-HMS production in samples containing buffer compared to samples containing double distilled water.

We have successfully show that our E. coli cells carrying the K118021 biobrick is capable of converting catechol into 2-HMS. Moreover, the reduction Figure 3 shows a reduction of 2-HMS concentration in the solution. It is more than likely, considering that 2-HMS can be metabolized by the cell, that the soluble metabolic machinery of E. coli is metabolizing 2-HMS into its breakdown products. This is a feature of the system that we intend to exploit in our remediation project.


With this in mind, it is inefficient to utilize a single turnover enzyme such as catechol 2,3-dioxygenase in an industrial setting. We have identified a protein that will reduce the iron that is oxidized in the conversion of catechol to 2-HMS. The gene coding for this enzyme (xylT) codes for a ferredoxin protein, and is located on the same operon as xylE in Pseudomonas putida1.


We intend to introduce ferredoxin to our bioremediation project next year with the aim of increasing catechol 2,3-dioxygenase efficiency by allowing it to catalyze multiple turnovers of catechol to 2-HMS

Before using xylE in this part for our project, we tested enzyme activity of this original part. We directly transformed the part plasmid into E. coli TOP10 strain, spread them on chloramphenicol plate, and picked single colony, which was then inoculated into 3ml chloramphenicol LB to culture overnight at 37℃.

Then the culture was separated into three parallel group and dilute to OD600 between 0.6-0.8, and different amount of glucose was added. After 1h of 220rpm shake at 37℃, the cell culture was aliquoted into 96-well plate, 100ul per well, 4 wells per group.

Varioscan Flash(TM) microplate reader was used to measure absorbance at 377nm of each well. The protocol for the instrument is listed here. The result showed significant decrease of group added 5 mM glucose than untreated group. 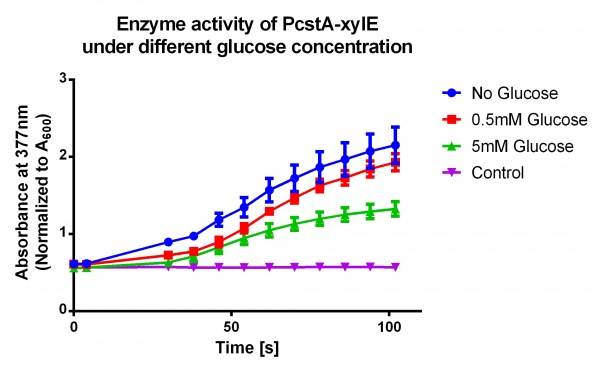 1Polissi A., Harayama S. (1993) In vivo reactivation of catechol 2,3-dioxygenase mediated by a chloroplast-type ferredoxin: a bacterial strategy to expand the substrate specificity of aromatic degradative pathways.. EMBO J., 12(8); 3339-3347