The Biosafety-System araCtive BBa_K1172909 is an improvement of the BioBrick BBa_K914014 by replacing:


For more details about the seperate genes in this Biosafety-System and their function, click here

For more details about the function of the Biosafety-System in general, click here

Combining the genes described above with the Biosafety-Strain K-12 ∆alr ∆dadX results in a powerful device, allowing us to control the bacterial cell division. The control of the bacterial growth is possible either active or passive. Active by inducing the PBAD promoter with L-arabinose and passive by the induction of L-rhamnose. The passive control makes it possible to control the bacterial cell division in a defined closed environment, like the MFC, by continuously adding L-rhamnose to the medium. As shown in the Figure 1 below, this leads to an expression of the essential alanine racemase (alr) and the AraC regulator, so that the expression of the RNase Ba is repressed. 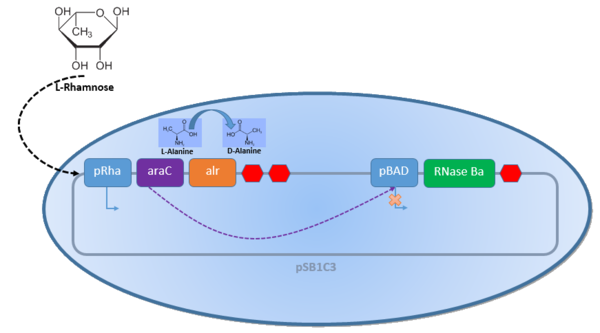 Figure 1: Biosafety-System araCtive in the presence of L-rhamnose. The essential alanine racemase (Alr) and the repressor AraC are expressed, resulting in a repression of the expression of the RNAse Ba. Consequently the bacteria show normal growth behaviour.

In the event that bacteria exit the defined environment of the MFC or L-rhamnose is not added to the medium any more, both the expression of the alanine racemase (Alr) and the AraC regulatordecrease, so that the expression of the toxic RNase Ba (Barnase) begins. The cleavage of the intracellular RNA by the Barnase and the lack of synthesized D-alanine, caused by the repressed alanine racemase inhibit the cell division and makes sure that the bacteria can only grow in the defined environment or the device of choice respectively. 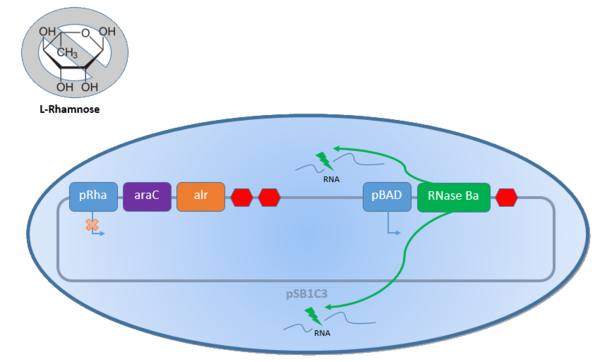 Figure 2: Active Biosafety-System araCtive outside of a defined environment lacking L-rhamnose. Both the expression of the alanine racemase (Alr) and AraC repressor are reduced and ideally completely shutdown. In contrast, the expression of the RNase ba (Barnase) is turned on, leading to cell death by RNA cleavage.

Characterization of the arabinose promoter PBAD

First of all, the arabinose promoter PBAD was characterized to get a first impression of its basal transcription rate. Therefore the bacterial growth was investigated under the pressure of the unrepressed PBAD promoter on different carbon source using M9 minimal medium with either glucose or glycerol. The transcription rate was determined by fluorescence measurement of GFP BBa_E0040 transcribed via the PBAD promoter using the BioBrick BBa_I13541.
As shown in Figure 3 below, the bacteria grew better on glucose than on glycerol. This is caused by the fact that glucose is the better energy source of this two, because glycerol enters glycolysis at a later step and therefore delivers less energy (in addition to the additional ATP consumption to drive glycerol uptake). For the investigation of the basal transcription the fluorescence measurements, shown in Figure 4, is more interesting.
Both the wild type E. coli K-12 and the strain E. coli K-12 ∆alr ∆dadX ∆araC show about the same fluorescence on glucose (red and orange curve) but differ on glycerol. This can be explained by the fact that growth on glucose does not cause an additional induction of the arabinose promoter PBAD, while glycerol does. In the presence of glucose, the intracellular concentration of cAMP is low. The absence of cAMP results in inactive CAP (carbon utilization activator protein) and thus no induction of inefficient catabolisms like the catabolism of arabinose. Therefore, glucose is catabolized by the bacteria first, resulting in an optimal growth. In the absence of glucose, the cAMP level increases which enhances via CAP-cAMP the transcription of most operons encoding enzymes for the catabolism of alternative carbon sources. Therefore, the expression of GFP under the control of the PBAD promoter increases on glycerol. Another difference can be seen between the wild type (black curve) and the strain K-12 ∆alr ∆dadX ∆araC (blue curve). The Biosafety-Strain shows lower expression then the wild type, but has about the same growth rate, according to Figure 11. The reason for this characteristic is caused by the deleted AraC protein in the Biosafety-Strain. Because the AraC protein functions not only as are repressor but also as an activator the transcription rate decreases in the Biosafety-Strain. 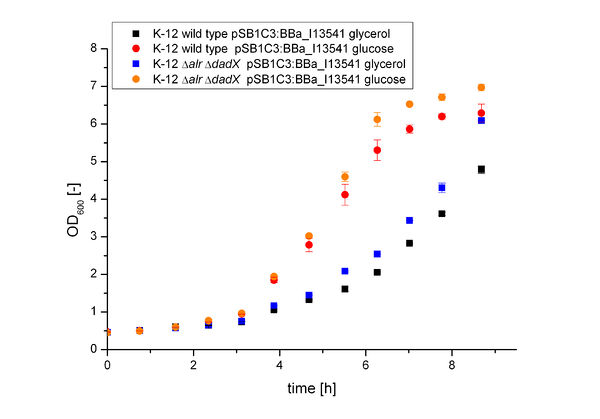 Figure 3: Characterization of the bacterial growth of the strain K-12 ∆alr ∆dadX ∆araC containing the plasmid BBa_I13541 with GFP (BBa_E0040) under the control of the PBAD promoter. The M9 medium was supplemented with 5 mM D-alanine. It could be demonstrated, that the bacteria grow faster on M9 minimal medium containing glucose than on M9 minimal medium with glycerol. 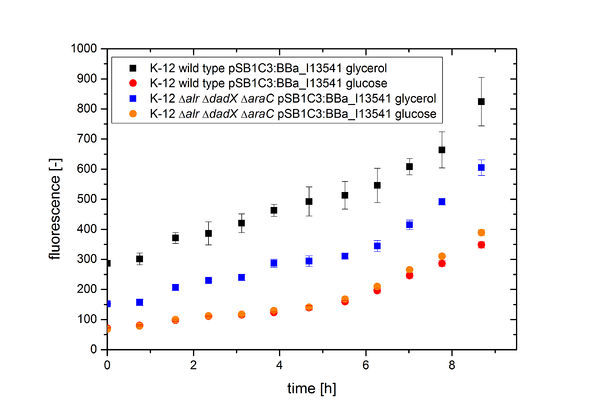 Figure 4: Characterization of the fluorescence of the strain K-12 ∆alr ∆dadX ∆araC containing the plasmid BBa_I13541 with GFP (BBa_E0040) under control of the PBAD promoter. The Biosafety-Strain was cultivated on M9 minimal medium with 5 mM D-alanine supplemented.

With the specific production rate of GFP, it can be demonstrated that GFP synthesis rates differ extremely between the cultivation on glucose and glycerol. The specific production rate is constantly very low when using glucose as carbon source, but shows a higher more unstable level in the cultivation with glycerol.
Because the specific production rate was calculated between every single measurement point, the curve in Figure 5 is not smoothed and so the fluctuations have to be ignored, as they do not stand for are real fluctuations in the expression of GFP. They are caused by measurement variations in the growth curve and the fluorescence curve. And as neither of this curves are ideal, the fluctuations are the result. Nevertheless this graph shows clearly the difference between the two carbon sources. 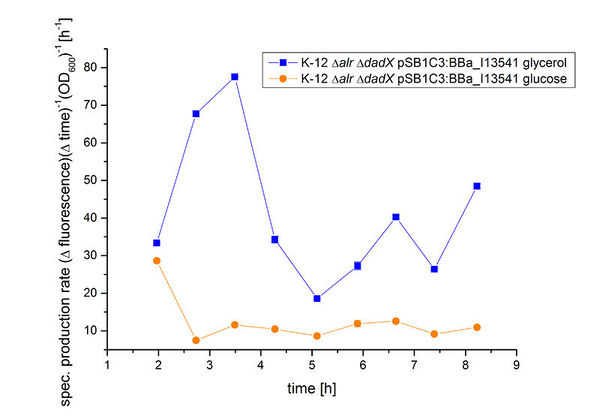 The Biosafety-System araCtive was characterized on M9 minimal medium using glycerol as carbon source. As for the characterization of the pure arabinose promoter PBAD above, the bacterial growth and the fluorescence of GFP BBa_E0040 was measured. Therefore, the wild type and the Biosafety-Strain E. coli K-12 ∆alr ∆dadX, both containing the Biosafety-Plasmid BBa_K1172909, were cultivated once with the induction of 1% L-rhamnose and once only on glycerol.
It becomes obvious (Figure 6) that the bacteria, induced with 1 % L-rhamnose (red and black curve) grow significantly slower than on pure glycerol (orange and blue curve). This is attributed to the high metabolic burden encountered by the induced bacteria. The expression of the repressor AraC and the alanine racemase (Alr) simultaneously causes a high strain on the cells, so that they grow slower than the uninduced cells, which express only GFP.
Comparing the bacterial growth with the fluorescence in Figure 7, it can be seen that the fluorescence seems to follow the same trend than the bacterial growth. The uninduced cells show approximately an exponential rise of fluorescence, while in comparision the fluorescence of the induced bacteria increases only slowly. 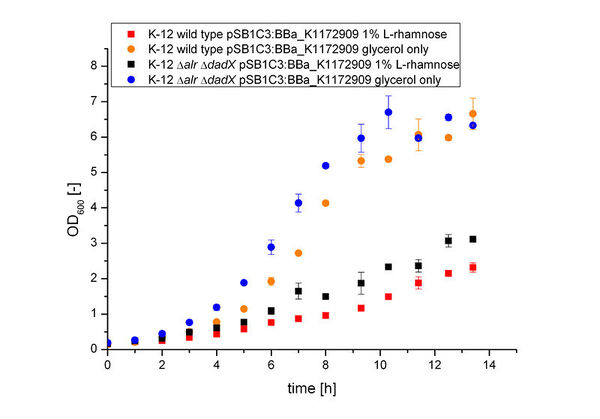 Figure 6: Characterization of the bacterial growth of the Biosafety-System on M9 minimal medium with glycerol. The Figure compares the wild type K-12 and the Biosafety-Strain K-12 ∆alr ∆dadX containing the Biosaftey-Plasmid BBa_K1172909 and the induction by 1% L-rhamnose to pure glycerol. 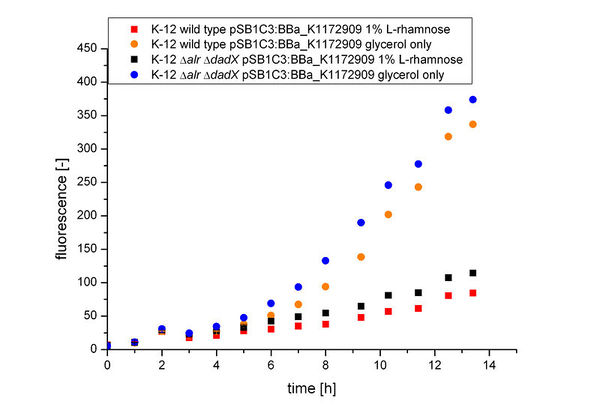 Figure 7: Characterization of the fluorescence of the Biosafety-System araCtive. The Figure compares the wild type K-12 and the Biosafety-Strain K-12 ∆alr ∆dadX containing the Biosafety-Plasmid BBa_K1172909 and the induction by 1% L-rhamnose to pure glycerol..

From the data presented above it can not be determined if the expression of the repressor AraC does affect the transcription of GFP or not. The slower growth of the bacteria is a first indication that the repressor AraC and the alanine racemase (Alr) are highly expressed, but the growth of the bacteria shows nearly the same kinetics as the fluorescence. So it could be possible that the repressor does not affect the expression level of GFP under the control of the arabinose promoter PBAD. This becomes more clear by the calculation of the specific production rate of GFP by equation (1) . As shown in Figure 8 below the specific production rate differs clearly between the uninduced Biosafety-System and the Biosafety-System induced by 1% L-rhamnose. The production of GFP in the presence of L-rhamnose (red curve) is always lower than in its absence (orange curve), so that the expression of GFP is repressed in the presence of L-rhamnose.
Because the specific production rate of GFP was calculated between every single measurement point, the curve in Figure 8 is not smoothed and so the fluctuations have to be ignored, as they do not stand for are real fluctuations in the expression of GFP. They are caused by measurement variations in the growth curve and the fluorescence curve. But there is a clear tendency that the production of GFP is significantly lower when the bacteria are induced with 1% L-rhamnose. So the Biosafety-System araCtive works. 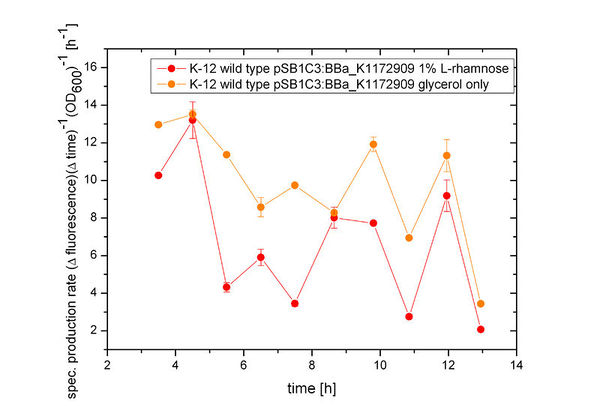 Conclusion of the Results

For the conclusion of the result, visit our wiki.