Not Released
Sample It's complicated
Experience: Works
Not Used
7 Twins
Get This Part

PphoA is a promoter that is activated by PhoB-phosphorylated when phosphate concentration is low. GFP is a reporter. 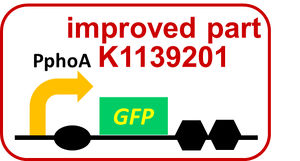 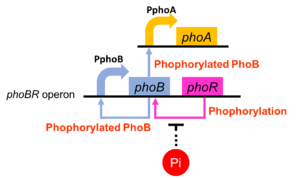 Fig. 2. Regulation of the phoA promoter

By an induction assay, this part was confirmed to be repressed by the increase in phosphate concentration.

Plants are reported to be in phosphate starvation when its concentration is below 1 mM (Hoagland et al., 1950). Our part can sense the concentration below 1 mM, too (Fig. 6). Therefore, we believe our improved part can be applied to agricultural field. For instance, we have a future plan to create E. coli that could increase plant growth by synthesizing several plant hormones depending on the soil environment.

Fig. 5. Equation for the induction mechanism

The result of our model is shown in Fig. 6. 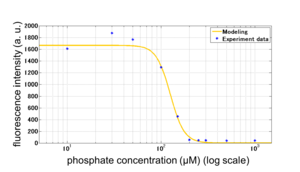 Fig. 6. A model with fitting the results of our assay

In the absence of a lab, The University of Florida 2020 iGEM team offers literature to further understand and improve part BBa_K1139201. To increase the expression of part BBa_K1139201 designed by iGem Tokyo 2013 Team, and sfGFP proteins of future iGEM projects, the RiboJ insulator sequence can be added between the pPhoA promoter and the downstream sequences (Part BBa_K1139201 with insulator ). Insulators protect against unexpected interactions between neighboring sequences in a genetic circuit (Clifton 2). A common insulator, RiboJ, is made up of the sTRSV-ribozyme, along with a subsequent 23-nucleotide hairpin sequence (Luo 3). The hairpin structure helps expose the ribosome binding site, so that translation can be increased for the downstream sequence transcripts (Luo 3). Therefore, insulators, and specifically, the RiboJ sequence, can be used to increase the efficacy of gene and protein expression in future experimental genetic constructs.

The results from the Department of Biology at the College of William and Mary show greater absolute sfGFP fluorescence was observed in the promoter construct insulated with the RiboJ sequence, as compared to the promoter without RiboJ insulation (Clifton 4). It was determined from this experiment that using a RiboJ insulator within the composite part construct leads to increased sfGFP protein expression and higher concentration of mRNA transcripts (Clifton 4). 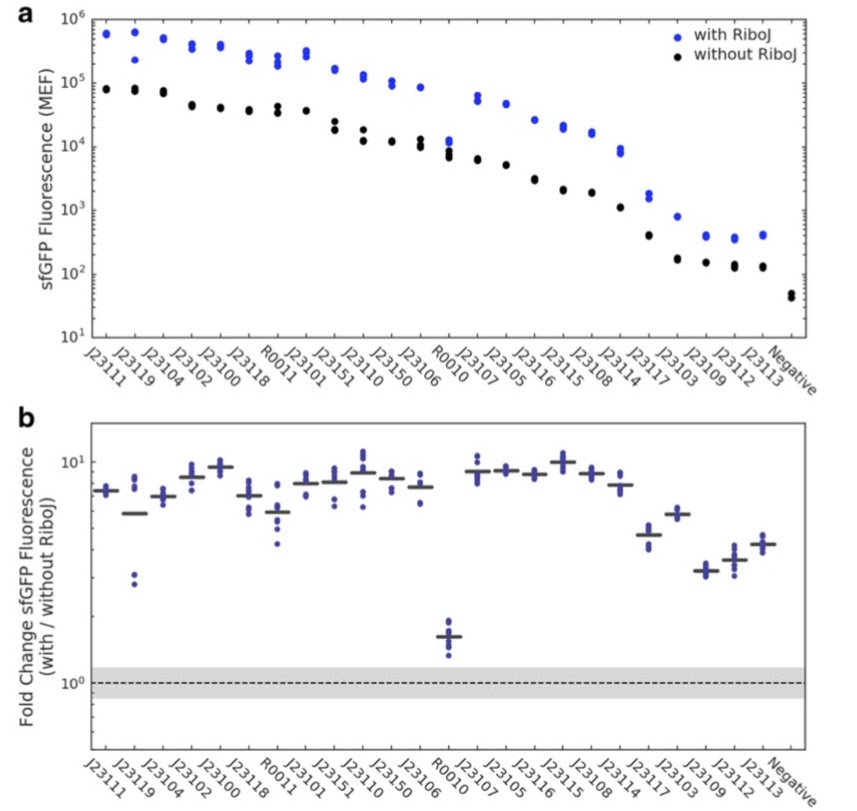 Figure 2. This experiment by Clifton, Jones, et al., compared the protein expression levels of 24 constitutive promoters, some of which contained the RiboJ insulator sequence and others that did not. The only difference between a promoter and its paired construct was the presence of added RiboJ insulator sequence. As seen in the graph on the right, as published in the Journal of Biological Engineering, the blue column represents the constitutive promoters that included the RiboJ sequence, while the gray column represents the promoters without the addition of RiboJ (Clifton). When comparing the mRNA and protein expression of these promoters, it was determined in the Journal of Biological Engineering that RiboJ insulators increase the expression levels of the constructs (Clifton).

Including the DNA sequence (listed above) between the pPhoA and the subsequent genes in Part BBa_K1139201 can increase the expression of sfGFP protein in this specific part, but also in future iGEM experiments that involve the quantification of absolute fluorescence as the output of an experimental design.