pDawn can be used to induce transcription of a downstream gene with blue light.

The plasmid pDawn was designed by Ohlendorf et al. in 2012 together with its counter plasmid pDusk. Both plasmids are single plasmid systems, which allow the activation (pDawn) or repression (pDusk) of gene expression by blue light. They are easy to implement in the laboratory and lead to up to 460-fold activity change upon ilumination.

Ohlendorf et al. (2012) had previously designed the histidine kinase YF1, which phosphorylates FixJ in the absence of blue light. The phosphorylated FixJ drives robust gene expression from the FixK2 promotor as shown in figure 1 for both pDawn and the pDusk. Upon light absorption, net kinase activity of YF1 and consequently gene expression under control of the FixK2 promotor is greatly reduced. pDusk an pDawn enable light-repressed or light-induced gene expression in Escherichia coli and are easy to implement in the laboratory. Therefore, all components of the YF1/FixJ TCS were assembled on only one medium-copy plasmid in which YF1 and FixJ are constitutively expressed by the Lacq promotor. Target genes can be introduced via the multiple-cloning site (MCS) under the control of the pFixK2 promotor, allowing light-repressed gene expression. To obtain pDawn the light effect is inverted by the introduction of a gene-inversion cassette into pDusk. This gene-inversion cassette is based on the λ phage repressor cI and the λ phage promotor pR.

Ohlendorf et al. (2012) analyzed the system by the insertion of the red-fluorescent reporter protein DsRed Express2. That way they were able to measure up to 460-fold induction upon ilumination. However, they also found that their plasmid, which acts on gene expression level, only allows light-induced perturbations on the timescale of hours.

In addition to the literature data, further testing was conducted in 2017 by Cornell iGEM. By growing E. coli under different intensities of visible light, we can compare the relative expression levels of a FLAG-tagged control protein, superoxide dismutase, under optogenetic control.

We assessed the transcriptional activity of pDawn and pDusk in response to three different levels of light intensity from a standard laboratory fluorescent light:

Our initial characterization revealed a dose-dependence of pDusk. However, pDawn did not display a dose-dependent response in response to stimulation from fluorescent light. We suspect this to be the result of low light intensity. Our results suggest a light-intensity dependence of pDusk and pDawn. Our results also show that our cI repressor biobrick successfully converted the light-repressible pDusk into a light-inducible pDawn. Our initial characterization was conducted with 1 second pulses and revealed a significant lag between initial exposure and translational response:

For our subsequent characterization, we increased the intensity and pulse duration of the LED to parse out more subtle effects at earlier time points: Our results suggest a light intensity and time-dependence of the pDawn and pDusk optogenetic circuit.

ShanghaiTech iGEM(https://2019.igem.org/Team:ShanghaiTech_China) characterized the efficiency of pDawn system with mEGFP and improved it.
Results were analyzed in both visualized micrographs and normalized line graphs, which showed the qualitative and quantitative mEGFP expression level respectively.
Micrographs are listed as follows:

[Go for the protocol of characterization:https://2019.igem.org/Team:ShanghaiTech_China/LightControl] 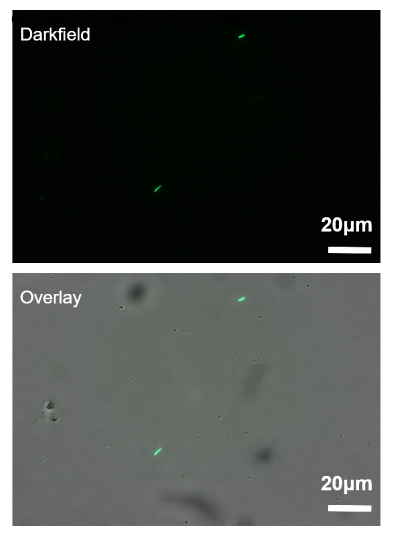 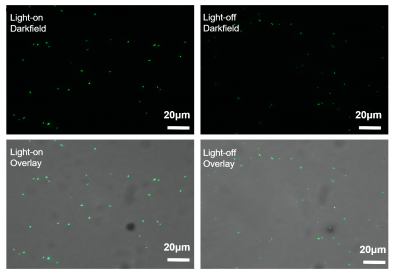 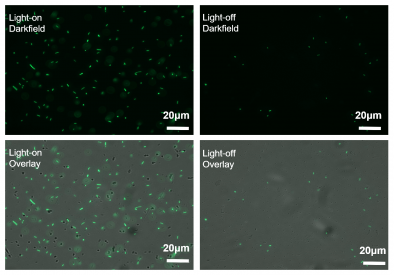 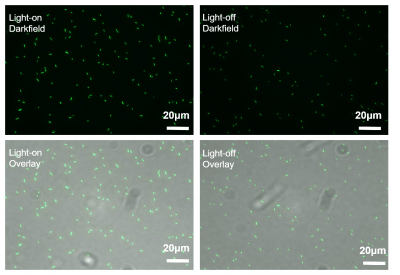 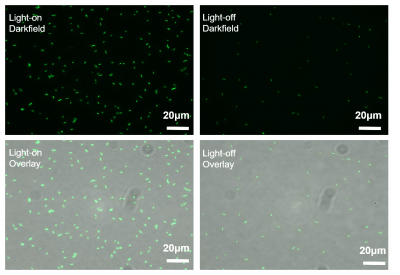 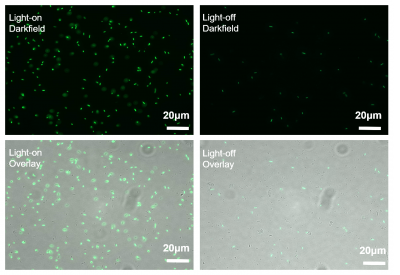 Fig1(f). pDawn-mEGFP-36 hour
Figure 1: Representative images of pDawn-mEGFP expression under different light illumination-durations. The groups labeled ‘light-on’ were under light induction, while controls labeled ‘light-off’ were kept in the dark wrapped with aluminum foil. pictures were taken with the same parameters as the Alexa Fluor 488 dye, with the same 1000-ms exposure time for all images. The Brightfield images were captured with 300-ms exposure time.

Result: As the illumination duration increases, the bacteria densities also increased until it became stable after 30 hours. Substantially, there were also big increases in mEGFP fluorescence per bacterium in light-on groups over light-off groups, suggesting the light induction was successful. 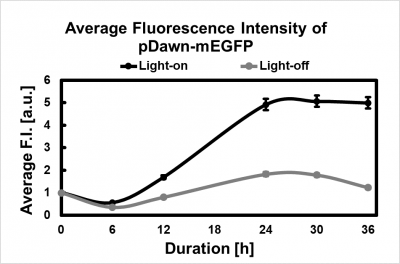 Figure 2. Normalized line graphs of average mEGFP F.I. over time normalized based on duration = 0 h. Detailed methods of data analysis are shown at the bottom of this part.

Result: The graph shows that mEGFP expression was sharply increased after 6 hours when treated with light, and reached the maximum expression level after 24 hours. Although mEGFP expression in the light-on groups were much higher than that in light-off groups, there was significant leakiness expression in darkness. To overcome this deficiency, several modifications were applied to the plasmid, which will be elucidated in the next part.