1 Registry Star
61 Uses
Get This Part

I. Characterisation of LasR by Imperial College London iGEM 2016

We improved this part by characterising the activation range of LasR, and the crosstalk between LasR and non-cognate AHLs. We placed the coding sequence downstream from the pLas promoter, and recorded the fluorescence for different concentrations of AHLs.

The activation range of LasR by its cognate inducer (3O-C12-AHL) was characterised in TOP10 E.Coli cells. Cells transformed with the Las response device were cultured to the exponential phase and treated with appropriate concentrations of 3O-C12-AHL in 96-well microplates. These induced cells were grown in the microplates and their fluorescence and absorbance values (OD 600) were monitored over time using a microplate reader. The reported values for the normalised fluorescence represents the values recorded 180 minutes after AHL induction. The normalised fluorescence was calculated by dividing fluorescence values by absorbance values and correcting for LB autofluorescence. In order to characterise the orthogonality of the Las system, we measured absorbance and fluorescence of the cells in the plate reader after treating them with varying concentrations of 3 different AHL signals (C4 AHL of the Rhl system, 3O-C6 AHL of the Lux system, and 3O-C14 AHL of the Cin system). This allowed us to determine whether these non-cognate AHLs were capable of activating the LasR response protein, and therefore the level of crosstalk between the quorum sensing systems. 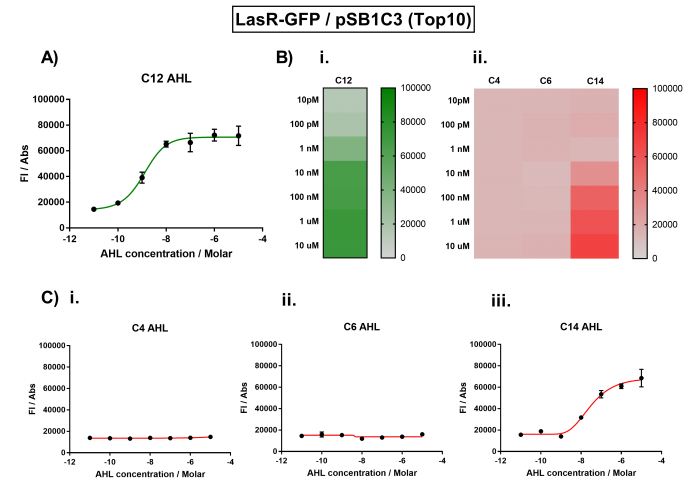 Analysis The results from Figure 1A show that the concentration range of AHL (3O-C12 AHL) required for the activation of the Las response device was 100pM-10uM. Furthermore, it can be seen from Figure 1C that LasR does not appear to be activated by C4 AHL or 3O-C6 AHL, suggesting that the Las quorum system is orthogonal with Rhl and Lux. However, it is seen that LasR is activated significantly by 3O-C14 AHL, suggesting that the Las and Cin quorum systems lack orthogonality.

For the biobrick part, BBa_C0079, there was a 60.0% of identity match and 80% of similarity match to minor allergen Cla 7 [Davidiella tassiana] https://www.ncbi.nlm.nih.gov/protein/467629. This means that the biobrick part HAS Potential Allergen Status. In the 80 amino acid alignments by FASTA, matches found that there are greater than 35% for this biobrick.