T7 promoters can produce high levels of transcription in E. coli when T7 RNAP is present. The second advantage of T7 promoters is that they are not recognized by E. coli RNAP making T7 promoters capable of independent regulation from E. coli promoters. Since an active strong T7 promoter can completely stop the growth of E. coli due to the high level of resource consumption (e.g. nucleotides) by the T7 RNAP, it is typically necessary to regulate the levels of either the T7 RNAP or the T7 promoter or both. As such the T7 promoter family contains both constitutive promoters and negatively regulated promoters that can be turned off by a repressor protein. The most common cell strain to use with a T7 promoter system is BL21(DE3) which is an E. coli B strain that contains a λ lysogen with an inducible T7 RNAP gene on the chromosome. However, it is possible to engineer many other E. coli strains to conditionally express T7 RNAP.

The sequences of the T7 promoters can be found in the table below. To obtain the physical DNA, we recommend two approaches -
Via de novo synthesis: Since the promoters are relatively short sequences, they can be ordered as two single-stranded overlapping oligo's are annealed and extended to construct the full promoters. See this OpenWetWare protocol on how to constructing parts via oligo annealing and extension. Alternatively the promoters can be ordered as short genes from a company such as Geneart. 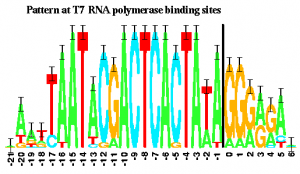 The sequence logo for the strong promoters from the bacteriophage T7 genome.