The cI regulated promoter is based on the pR promoter from bacteriophage lambda. The promoter has two DNA binding sites for lambda cI repressor BBa_C0051. cI binding results in repression of transcription. The specific sequence used here is based on the cI repressible promoter used in the Elowitz repressilator (and references therein). f Intrinsic noise value: 0.0869 (compare with R0010: 0.0707; R0011: 0.0040). See William_and_Mary iGEM 2015

>Internal Priming Screening Characterization of BBa_R0051: Has no possible internal priming sites between this BioBrick part and the VF2 or the VR primer.

(The following experimental data are from the literature, not the actual data made by the team)

Due to the compression of experimental time this year, we are not able to obtain the actual data of the characterization of PR promoter, so we consulted the literature and found that it depicts some properties of PR promoter. In the literature, the reporter gene LacLM is expressed by PR promoter, and the activity of LacLM is used to characterize the strength of PR promoter. The synthetic promoter expresses CI protein and Pepl reporter gene, and the Pepl activity is used to characterize the expression of CI protein. The LacLM and PepI activities are measured by catalyzing their substrates ortho-nitrophenol-b-galactoside or L-proline-para-nitroanilide, respectively. 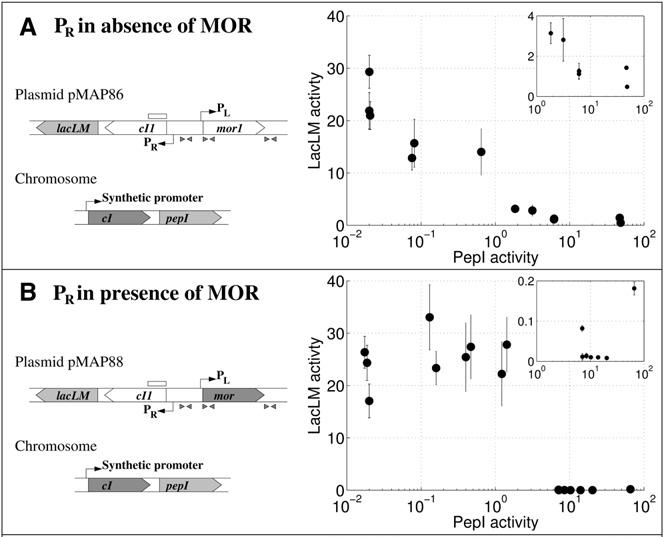 To compare the transcriptional strength between the pR promoter and a constitutive promoter J23100 (BBa_J23100), two plasmids E. coli-DH5α-pR-B0034-sfGFP and E. coli-DH5α-J23100-B0034-sfGFP were firstly constructed, and the reporter gene transcription (Superfolder GFP) controlled by either of two plasmids was determined by measuring the average fluorescence intensity. To simplify the comparison, we set the strength of J23100 promoter as 1 and normalized the strength of pR to J23100. 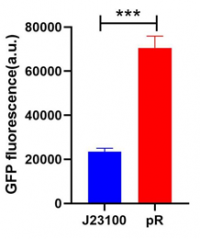 Excitation is induced at wavelength of 488 nm and the intensity of the emitted fluorescence of wavelength at 520 nm is measured as a function of transcription strength. Fluorescence is calculated by the formula below, LB medium is set as the blank control.