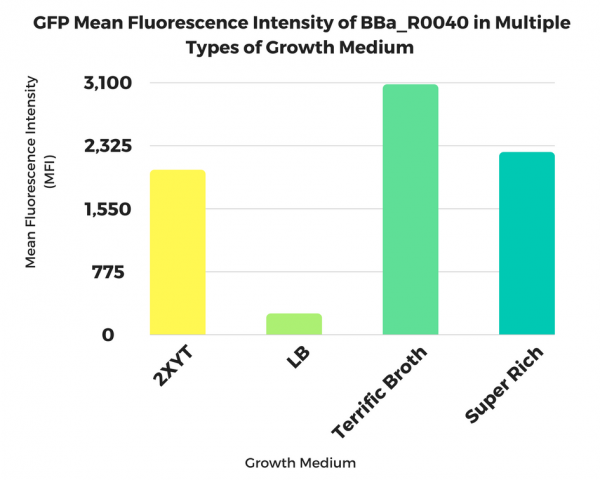 Summary: Characterizing Part:BBa_R0040 through measuring red fluorescence intensity in E.coli TOP10 and comparing the promoter strength with mutants. The mutation is designed in -35 region of the Ptet promoter.

Purpose: We used Ptet promoter to expression the killer gene in our project. In order to decrease the expression level of toxins, we mutated the -35 region to get Ptet promoters with lower strength. Results: Measuring the RFP intensity using enzyme labeled instrument. 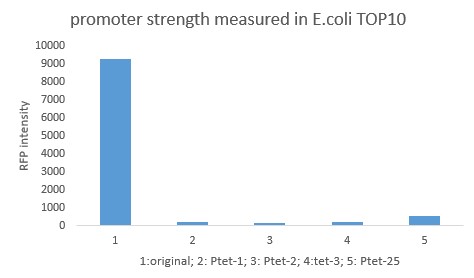  Incubation for over 12 hours

Used this part to create constituitively on GFP and constituitively on OriTf, OriTr. This was one of our most-often used and reliable parts. Have not tried to de-activate it using TetR yet. Worked very well with our parts. [smelissali 6/7/06]

The protocols for the characterization of pTet promoter are reported in the pTet measurement section.

The data collected from the mRFP measurement systems were processed as described in data analysis section. The induction curves were obtained by fitting a Hill function as described in modelling section and the estimated parameters for pTet are reported in the pictures and in table below.

This promoter is widely studied and characterized usually using the strong RBS BBa_B0034. Here we have characterized its transcriptional strength as a function of aTc induction (ng/ml) for different RBSs. Three different induction curves were obtained and are reported in figure: The estimated parameters of the Hill curves described in the figures are summarized in the table below:


Data are provided as average [CV%]

The measurement system pTet-B0031-mRFP-TT couldn't be assayed because its fluorescence output is under the detectability threshold of our measurement instrument. For this reason, the parameters of the corresponding Hill curve couldn't be estimated and are reported as 'Not Determined' ND.

α parameter (representing the maximum trascriptional rate in the studied range of induction) varies as expected with the RBS variation and also the δ and η parameters are quite different among the RBS variations.

The kpTet parameter is quite constant among the RBS variations, thus suggesting that in this case the RBS variation doesn't substantially affect the switch point of the Hill curve, even if the amplitude and the maximum slope are not quite maintained (for the η parameter, maybe fitting problems).

The operative parameters are summarized in the table below:

From these parameters, it is evident that whilst the switch-point is almost maintained for all the RBSs, the linear boundaries are similar for RBS30 and RBS32 but for RBS34 are moved on the right of one order of magnitude.