Inverting regulatory region controlled by LacI (BBa_C0010, BBa_C0012, etc.) The PLlac 0-1 promoter is a hybrid regulatory region consisting of the promoter P(L) of phage lambda with the cI binding sites replaced with lacO1. The hybrid design allows for strong promotion that can nevertheless be:

>Internal Priming Screening Characterization of BBa_R0011: Has no possible internal priming sites between this BioBrick part and the VF2 or the VR primer.

The Optimal IPTG Concentration and Temperature for the Expression of Protein in E.coli BL21 (DE3) with the PLIac01 Hybrid Promoter (BBa_R0011) and pSB1C3 and the Relation between the Strength of BBa_R0011 and IPTG Concentration at the Transcription Level

In this year, we constructed an EGFP expression vector (with pSB1C3 as the plasmid skeleton) in which the expression of EGFP was controlled by the PLIac01 Hybrid Promoter (BBa_R0011) and transformed it into E.coli BL21 (DE3) which is commonly used to express protein. Then, by measuring the EGFP fluorescence, we investigate the optimal IPTG concentration and temperature for the expression of protein in E.coli BL21 (DE3) using the BBa_R0011 in pSB1C3. In the measurement, the E.coli BL21 (DE3) which contained plasmid only consisting of EGFP and pSB1C3 was used as the blank. Meanwhile, we carried out qRT-PCR to directly investigate the relation between the original strength of BBa_R0011 and IPTG concentration at the transcription level without interfering by context. 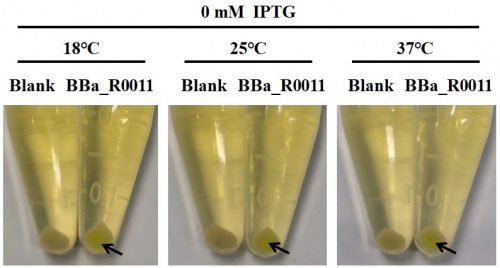 Figure 1. The leakage of BBa_R0011 in E.coli BL21(DE3) (with pSB1C3 as plasmid skeleton).The Blank is the E.coli BL21 (DE3) which containes plasmid consisting of EGFP and pSB1C3 skeleton under the same culture conditions. The black arrow indicates the visible leakage expression of EGFP at each culture temperature without IPTG. 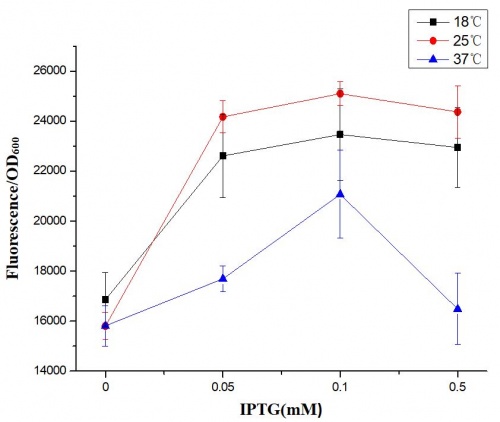 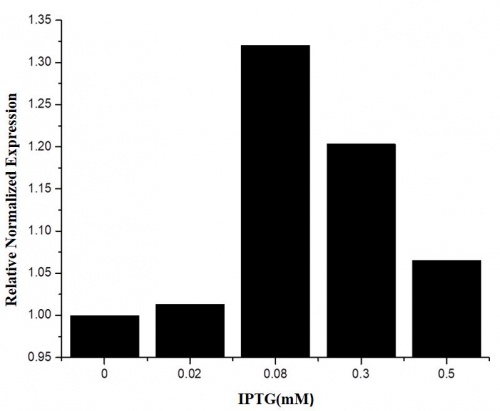