L-rhamnose-inducible promoter is capable of high-level recombinant protein expression in the presence of L-rhamnose, it is also tightly regulated in the absence of L-rhamnose by the addition of D-glucose. Read about this biobrick part in the context of the project.

L-rhamnose is taken up by the RhaT transport system, converted to L-rhamnulose by an isomerase RhaA and then phosphorylated by a kinase RhaB. Subsequently, the resulting rhamnulose-1-phosphate is hydrolyzed by an aldolase RhaD into dihydroxyacetone phosphate, which is metabolized in glycolysis, and L-lactaldehyde. The latter can be oxidized into lactate under aerobic conditions and be reduced into L-1,2-propanediol under unaerobic conditions.

The E. coli rhaBRS locus. In the presence of L-rhamnose, RhaR activates transcription of rhaR and rhaS, resulting in an accumulation of RhaS. RhaS then acts as the L-rhamnose-dependent positive regulator of the rhaB promoter.

The genes rhaBAD are organized in one operon which is controlled by the rhaPBAD promoter. This promoter is regulated by two activators, RhaS and RhaR, and the corresponding genes belong to one transcription unit which is located in opposite direction of rhaBAD. If L-rhamnose is available, RhaR binds to the rhaPRS promoter and activates the production of RhaR and RhaS. RhaS together with L-rhamnose in turn binds to the rhaPBAD and the rhaPT promoter and activates the transcription of the structural genes. However, for the application of the rhamnose expression system it is not necessary to express the regulatory proteins in larger quantities, because the amounts expressed from the chromosome are sufficient to activate transcription even on multi-copy plasmids. Therefore, only the rhaPBAD promoter has to be cloned upstream of the gene that is to be expressed. Full induction of rhaBAD transcription also requires binding of the CRP-cAMP complex, which is a key regulator of catabolite repression.

The pRha sequence was containing an EcoRI restriction site, so we had to disrupt it in order to use pRha as a biobrick. In order to decide which base pair to modify, we used the UCSC Microbial Genome Browser. We compared the pRha sequence in E.coli and similar species, and identified that the at the position is sometimes replaced by a in some species, so we decided to replace it in a same way. We ordered a gBlock with the pRha sequence having the mutation, and this is the sequence we used and submitted.

In order to characterize this promoter, we made a construct with a medium RBS (B0032) and an RFP cloned downstream of the pRha, on the pSB3C5 plasmid. We induced the expression of RFP by adding L-Rhamnose. As a negative control, we used cells without the inducer, as well as cells repressed with Glucose.

First, by simple observation under a fluorescence viewer, we have seen that the addition of 1% L-Rhamnose leads to a significant expression of RFP after 10hours. The negative controls, where no Rhamnose was added, or when the promoter was repressed by Glucose, did not show any visible fluorescence. Both photos are taken after we centrifuged a culture of NEB Turbo strain with transformed plasmid. For the fluorescent result, the same tubes were photographed under excitation light (540nm), through an emission filter (590nm).

We quantified this result in a plate reader.

Next, we characterized the pRha promoter using a plate reader. We used different concentrations of L-Rhamnose (0.05%, 0.1%, 0.2%, 0.5% and 1%) and observed the resulting fluorescence over time. As negative controls, we used the non-induced cells, as well as cells repressed by 1% Glucose. 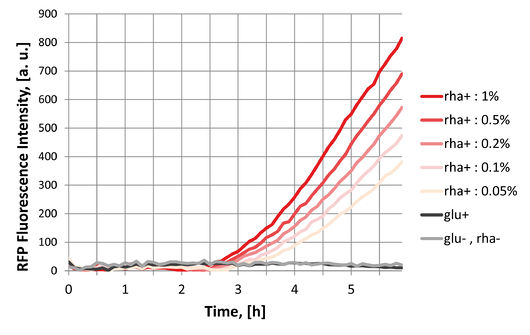 As we can see from the graph above, pRha promoter works as expected and it could be well tuned by concentration of L-rhamnose.

The UChicago 2015 iGEM team also used this part in their project and did some characterization of the promoter, using Western blot for their gene of interest, providing an improvement on the characterization accomplished by the 2012 Paris-Bettencourt team which used a plate-reader to measure fluorescence. In contrast to the low copy plasmid used by the Paris Bettencourt team, they characterized the promoter when expressed in a high copy plasmid. Accordingly, they discovered that despite following a similar protocol (10 hours of induction), significantly less rhamnose was required for the induction of the promoter in the high copy number plasmid.

Induction for the characterization curve was accomplished in M9 minimal media with supplements (0.4%glycerol, 0.1% casamino acids).

The UChicago team also verified that the pRha promoter is quite tight and has a relatively gradual response curve, characteristics that makes the promoter especially well-suited for assaying a wide range of concentrations of a protein of interest.

The densitometry results from Western blots indicate the tightness of pRha. At 0% L-rhamnose, there is significantly less KaiA expressed compared to KaiB and KaiC on a separate constitutively expressed promoter. This supports our ability to tune KaiA concentrations to optimize oscillations. 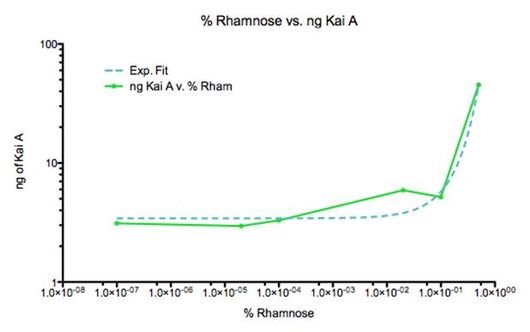 The gradient curve developed portrays the ability to fine tune the concentrations of KaiA. The data in this graph was corrected using ng from protein standards (below) 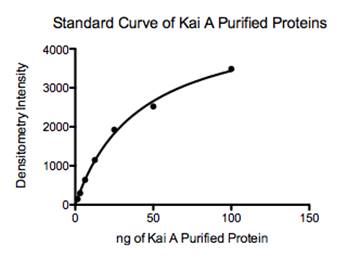 Fitted standard curve of purified Kai A proteins to determine ng of protein from intensity readings in Image J.

When using this promoter as a biosensor, it is used with only one gene encoding a fluorescent protein (rfp, gfp).This is because the Paris_Bettencourt 2012 team thought that it was sufficient to have a good expression by rhamnose. But we learned that if we add in the plasmid a gene that encodes constitutively for RhaS, we could have a better fluorescence.1 We could have decoupled the RhaS protein to the RhaR protein, thus suppressing the activator dependency.1 More, it allows us to import this biobrick in other bacteria than E.coli which don’t have rhaS gene in their chromosome. This modification has already been tested in cyanobacteria which is a clade within it’s difficult to find a good inducible promoter system, which is no toxic, with a linear expression.2 A study shows that Synechocystis sp, a cyanobacteria, has efficiently produced protein without either an E.coli sigma factor or a protein homologous to RhaS.2

However, the efficiency of the PrhaBAD system can be increased yet.

We know for exemple that the rhamnose is metabolized by E.coli, so the quantity in the cell decreases with time which involves that fluorescent signal being transient in function of time.

So for the chassis, we can use a bacteria where the chromosomic rhaB is inactivated by introduction of a shift mutation in rhaB.3 Thus, L-rhamnose isn’t metabolized anymore.3 This modification allows to have a signal that isn’t transient anymore for the protein production but neither dose dependant.3 The rhaB mutation alone allows us to have a response « all or nothing » independent of catabolism.3

Another point to ameliorate is the false dose-dependant effect of the PrhaBAD biobrick.3 In fact, some studies show that effect is due to the consumption of L-rhamnose by metabolism and not due to the regulation of production yield.3

These modifications have the advantage to not decrease the growth of the bacteria.3 But they allow overall to know exactly which concentration of inducer is optimal to produce a chosen protein efficiently.3

The double mutation described here allows also to have a better yield of secretory protein production which can have a saturation at the level of their biogenesis pathway.3

This promoter can be induced by an analogue of L-rhamnose, the L-mannose, which has a close effect but which isn’t metabolised.1 The article cited earlier tells us that the L-mannose could be a perfect analogue.1 Our system described previously is sometimes even more sensitive for it than for L-rhamnose.1 It also has the same linear response as with the L-rhamnose.1 So we have a response that continues in time and is more powerful.1 That surely because L-mannose isn’t well metabolized by E.coli and because it is recognized by RhaS.1 We also have an unimodal induction like with L-rhamnose which is useful to produce the same concentration of protein in different cells, except for low inducer concentration where the expression is bimodal.1 This bimodality at low concentration is also encountered with the Plac/IPTG inducible system which is hugely used, so it isn’t really a problem.1 It can be resolved by the use of another analogue, the L-lyxose, less efficient than the L-mannose but unimodal at low concentration.1 More, these two analogues are easily found in stores.1 The problem can however be the price of L-mannose, relatively expensive.1