This BioBrick is the generator for the enzyme xanthosine N-methyltransferase 1 (CaXMT1) and part of the caffeine synthesis pathway. For creating an expression cassette with all three enzymes of the caffeine synthesis pathway BBa_K801077 based on the substrate Xanthosine different promoters and terminators were assembled to each enzyme. CaXMT1 is regulated by the constitutive promoter Tef2, which is a strong yeast promoter. The used terminator Adh1, is a widely used yeast terminator. The Tef2 promoter was prefered compared to the Tef1 promoter (which is even stronger) in order to limit metabolic stress, which could result in a positive selection of natural mutants (with regard to genome integration). 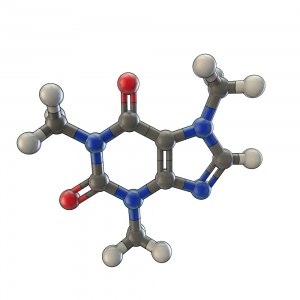 The enzyme CaXMT1 (xanthosine N-methyltransferase 1 of coffea arabica) catalyses the first reaction step of the caffeine biosynthesis pathway and convertes the sustrate Xanthosine into 7-Methylxanthosine. It uses SAM als methyl-donor and is located in the cytoplasm of the plants. Furthermore it exists as homodimer, being also able to form heterodimers with the other enzymes of the caffeine pathway (see Brenda).