This construction has two parts:

1. The transcription factor-binding site inside the promoter and
2. the coding sequence, which contains a synthetic fluorescent (green) protein. We chose as the promoter sequence the one of the nirB gene, because it is 100% dependent on FNR [1,2], which is the transcription factor activated when there is no oxygen in the environment. It is involved mainly in cellular respiration and carbon metabolism during anaerobic cell growth. 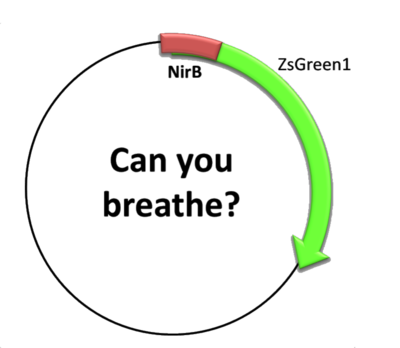 When is the protein synthesized? In order to obtain this green fluorescent protein one condition is required: anaerobic conditions should be met. We grew the bacteria in a oxygen-controlled environment [3].

The molecular mechanism underlying this phenomenon is as follows: the promoter is activated when there is a lack of O2 in the environment thanks to a family of proteins called FNR. FNR proteins are global transcriptional regulators that respond to fluctuations in ambient oxygen. They recognize DNA sequences in inverted disposition with this sequence: TTGATN1N2N3N4ATCAA [4], where N1-4 represents a non-conserved tetrad (no influence). The FNR sensor domain contains four cysteine residues that act like ligands for a group (cluster) of 4Fe-4S oxygen-sensitive structures. The acquisition of a 4Fe-4S cluster begins heterodimer formation of FNR that bind to specific sites of DNA and regulate transcription of target promoters. Under aerobic conditions (i.e. when oxygen is present), 4Fe-4S clusters are disassembled and the FNR dimers dissociate and form no structures that can bind to DNA.

How did we deal with this construction? Anaerobic conditions were achieved after putting a culture of E. coli, stirring, inside a sealed box. We let the bacteria to grow for at least two days and then we measured fluorescence.

In this experiment, our E.coli strain carrying the ZsGreen1 protein under the control of the nirB promoter was grown on LBA under two different conditions: aerobic and anaerobic. Anaerobic conditions were achieved by adding a small volume of sterile oil over the liquid culture (Figure 6), so no oxygen can be taken from the environment. After 2 days of growth, samples were taken from each culture and diluted to an OD of 0.1. After that, fluorescence intensity was measured.

Our results show that ZsGreen1 expression increases (a 20% approx.) under anaerobic conditions, according to the effect of oxygen on the FNR proteins (see the molecular mechanism description).