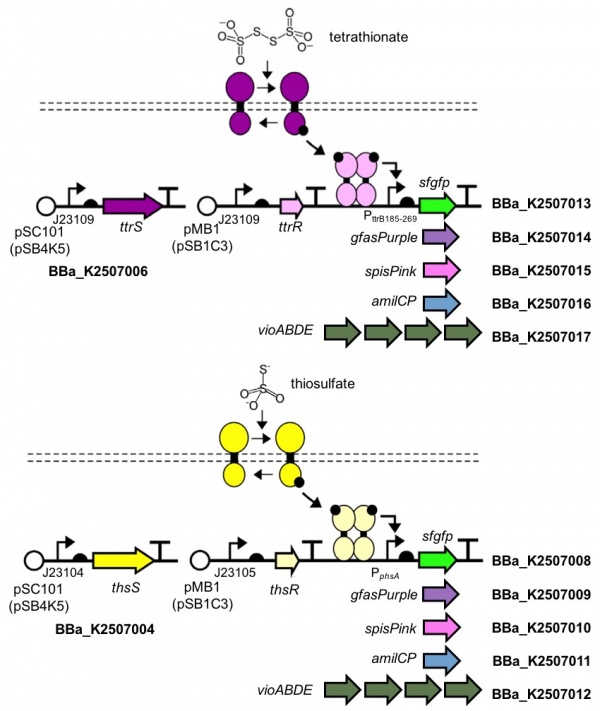 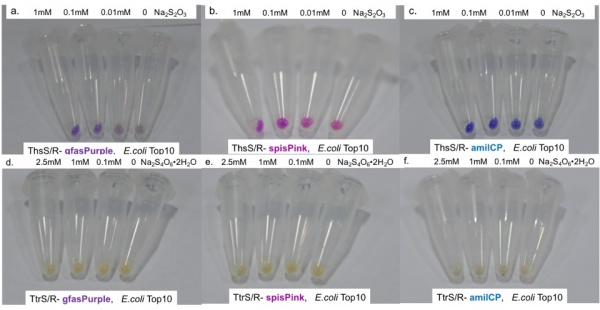 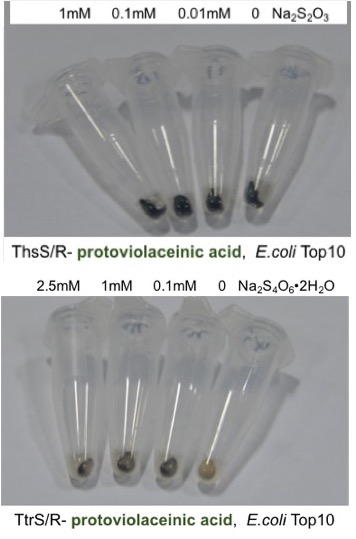 However, the silk protein produced from UCLA has no color, thus with less aesthetic characteristic and uneasy to observe directly. In order to observe the produced honeybee silk protein more directly, we add a blue chromoprotein, amilCP (part number: BBa_K592009) , to the end of the silk protein. AmilCP is a blue chromoprotein comes from coral, which has a strong blue after expressing. The color has the biggest absorption peak around 588nm, which can be observed by naked eyes directly without any equipment.

We designed 2 pairs of primers for the genes of honeybee silk protein and blue chromoprotein by molecular biology technology. (There is a GGGGS linker in the middle of two fragments. ) Then we use infusion technology to insert two fragments after T7 promoter of pET21a(+) vector. The verification by PCR is showed in Figure 1. After then we introduced the recombinant plasmid into E.coli BL21(DE3). In 48 hours, there is blue chromoprotein expressed in bacterium solution, which can be observed by naked eyes (Figure 2). Therefore, the improvement of honeybee silk protein is practical and valid.

In this way we creat a new part: Honeybee-blue with amilCP protein (BBa_K2220028)

The codon optimized blue chromoprotein sequence with the attached RBS and promoter ((BBa_K2253002)) has been sequence verified. However, there is one point mutation (5’ TTT 3’ to 5’ TTC 3’) in the nucleotide sequence, shown in Figure 3. Fortunately, this mutation is silent as it still retains the amino acid phenylalanine and thus the overall codon-optimized sequence of the blue chromoprotein. Another improvement of this part is that the blue chromoprotein BioBrick part now has the promoter and RBS sequence attached to it, making it more convenient for synthetic biologists to use as an additional cloning step is omitted.

These results were obtained with incorporated plasmid containing the Biobrick part part:BBa_K2669003 in the IDT supplied backbone pUCIDT (Amp).

The original native AmilCP sequence, Part:BBa_K592009 was codon optimized for E.coli K12 with a codon optimization tool provided by Integrated DNA Technologies (IDT). In order to conduct a stability assay through growth in liquid culture, the codon optimized basic part and the original native AmilCP part was attached to a constitutive promotor, RBS and a double terminator separately. The two Biobrick parts were ordered as customized genes from IDT inserted in pUCIDT (Amp). Figure 2: Transformation plate of colonies with the incorporated plasmid containing the original native AmilCP (BBa_K592009) sequence in the IDT supplied backbone. Colonies retrieved for the assay are circled.

Stability assay through growth in liquid culture was performed with both inserts in the IDT supplied backbone. 1 mL of LB with ampicillin (25 ug/ml) was inoculated with one single colony in eppendorf tubes in 10 replicates for each part. In order to allow 10 generations of growth, a 1:1000 dilution was made of the overnight culture and incubated for 24 h. The colour comparison was done through visualization of centrifuged cultures and by analyzing the color intensity we could deduce the stability of the chromoprotein-encoding plasmid.