Not Released
Sample It's complicated
Experience: Works
1 Uses
1 Twin
Get This Part

The PetroBrick: Strong Constitutive Expression of ADC and AAR in pSB1C3 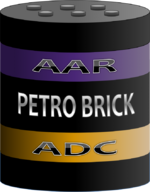 This part encodes both the BBa_K590032 Acyl-ACP Reductase (AAR) and the BBa_K590031 Aldehyde Decarbonylase (ADC) from Synechococcus elongatus PCC7942 behind a strong constituitive expression cassette, BBa_K314100 in the pSB1C3 vector. Transforming this part into E. coli will result in the production of alkanes, the primary component of diesel, without the need for any inducing agents. More information on the optimal conditions for alkane production as well as detailed protocols for growth, production, and analysis of alkanes can be found on the 2011 University of Washington iGEM Team Wiki page. 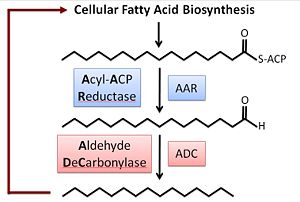 When they are expressed together, AAR and ADC produce alkanes from the cell's fatty acid biosynthetic pathway. Alkane production is enhanced when growing expression strains using the growth conditions developed by the 2011 University of Washington iGEM Team. Seen bottom left, the green GCMS chromatagram trace (corresponding to cells expressing both AAR and ADC) has significant new peaks corresponding to the C13 (8.2min) and C15 (9.2min) alkanes, as well as a peak at 10.2 minutes that contains both the C14 alcohol and the C17 alkene. The fact that the C17 alkene peak overlaps with the C14 alcohol peak makes exact quantification of C17 akene yields impossible, but we have sufficient evidence to determine that both molecules are present in the 10.2 minute peak (the earlier section of the peak has an MS spectra consistent with the C16 alcohol, and the later section is consistent with the C17 alkene). The C13 and C15 alkane peaks showed MS spectra highly consistent with C13 and C15 alkane reference spectra(for these spectra, as well as the C17 alkene spectrum, refer to the 2011 UW iGEM team's Spectra Page). In addition, both alkane molecules eluted off of the GC at the same time as C13 and C15 alkane standards, further increasing confidence that the 8.2 min and 9.2 min peaks do correspond to the C13 and C15 alkanes. Odd chain length alkane production is what is expected from our system, as ADC removes a carbonyl group from even chain length aldehydes produced by AAR, yielding an odd chain length alkane. Seen bottom right, alkane production is quantified from GCMS data. At this stage we were able to produce alkanes up to 160 mg/mL. Using the PetroBrick, we can turn simple sugars into diesel, a fuel fully compatible with modern infrastructure. We have confirmed that majority of alkanes come from sugar, and not the cell biomass used to inoculate the high density production culture by performing tests in our standard media with and without a carbon source. This resulted in trace alkane yields (4.7 mg/L) without sugar (most likely some alkanes were generated from inoculated cell biomass alone), but high alkane yields (240mg/L) were achieved when glucose was added to the minimal media. In addition, we have shown that glycerol can act as a carbon source for alkane production (56.3 mg/L). 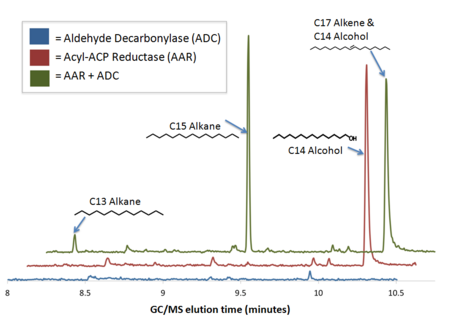 GC plot showing that alkanes are only produced when both ADC and AAR are expressed. 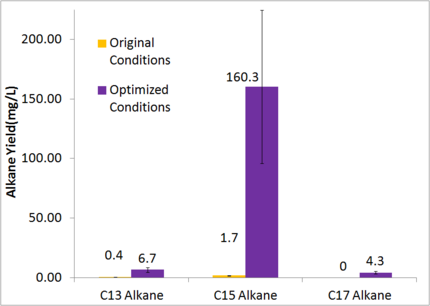 GC-MS quantification shows greater alkane production under UW iGEM 2011's "optimized conditions" (see wiki for details) - compared to the "original conditions" used (found here). Briefly, in both data sets cells were grown for 48 hours in a modified M9 media at 37degC. For the original conditions cells were grown shaking in a 14mL plastic culture tube, starting at an OD600 0.01, in this case the modified M9 meida also contained trace metals reported in the original science paper. For the optimized conditions cells were were grown in an sealed 13mm x 250mm glass test tube, starting at a high cell density of OD600 10.0 in the exact media conditions reported on the Washington 2011 iGEM wiki. 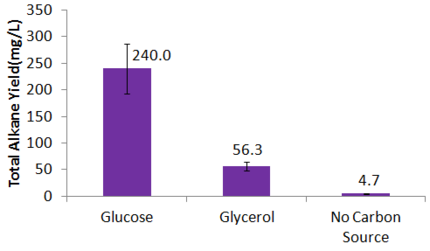