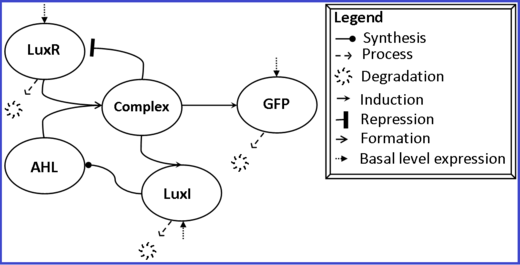 This device has three protein generators: lux pl-RBS-C0062-B0015 produces LuxR. LuxR forms a complex with the quorum sensing molecule AHL and this complex subsequently increases the transcriptional rate of the lux pR promoter while also decreasing the transcriptional rate of the lux pL promoter. Both of the other generators are under control of this lux pR promoter.

The second generator ‘luxpR-RBS-J04031-B0015’has a low basal expression of the GFP, which can - of course - be monitored.

The third generator produces luxI, which produces the quorum sensing molecule AHL. In combination with LuxR, AHL thus increases the production of AHL and GFP.

This BioBrick part produces an autoinducer that might interact with some pathogens.

This part was tested by measuring overnight E. coli cultures transformed with high copy plasmid pSB1A2 containing this insert. Fluorescence was measured in a Molecular Devices Spectramax M2 spectrophotometer, exciting the samples at 485 nm and detecting at 510 nm. 200 µL samples were analyzed in an opaque 96-wells plate. The GFP expression was monitored for 2 hours, with BBa_K546002 transformants (high copy, pSB1A2) as negative control. 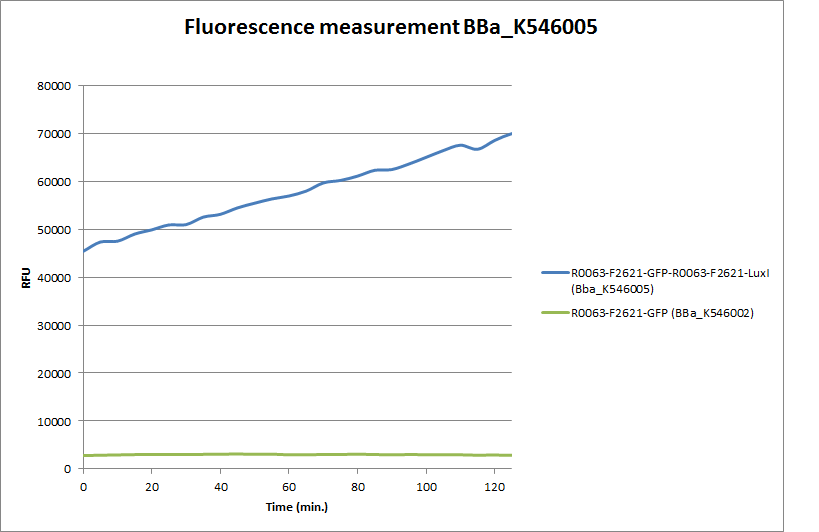