This device consists of two protein generators: The first generator ‘luxpL-RBS-C0062-B0015’ produces an intermediate level of the LuxR protein.

The second generator ‘luxpR-RBS-J04031-B0015’has a low basal expression of the GFP, which can - of course - be monitored.

Functionality of this part was tested with a Spectramax M2 spectrophotometer. This apparatus can measure fluorescence in microplates. The response to AHL was examined in duplo by applying different concentrations of AHL: 0, 250 and 1000 nM AHL in a 200 µL of overnight culture samples resuspended in PBS in a 96 wells plate. As this part is the repaired BBa_F2621, the broken version is also included in the measurements.

The fluorescence measurements are depicted in the diagram underneath. The detection limit of the apparatus was 13000 RFU for this experiment, as is visible in the diagram. R0063-F2621-GFP refers to this part and clearly responds to AHL as the GFP expression rapidly increases over time. F2621-GFP refers to the broken version of F2621 (thus without the constituve luxR because R0063 was missing in this part). This broken version hardly responds to AHL. 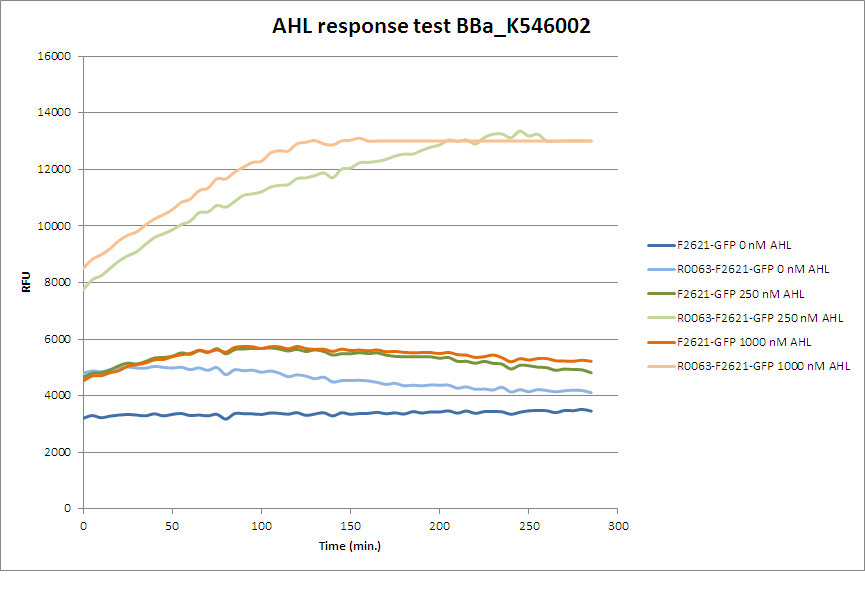