This device has two protein generators: The first generator ‘luxpL-RBS-C0062-B0015’ produces an intermediate level of the LuxR protein.

The second generator ‘luxpR-RBS-C0060-B0015’ has a low basal expression of the AiiA enzyme. AiiA is capable of degrading the quorum sensing molecule AHL.

Functionality of this part was tested by treating AHL mixtures with strains expressing this part. Liquid cultures were grown overnight, 1 mL aliquots of these cultures were spun down and resuspended in varying concentrations of AHL in PBS (to start the AHL degradation reaction). This was also done with a culture that contains BBa_K546002 (where aiiA is replaced with GFP).

After a 3h incubation, the supernatant was collected and subjected to a reporter strain: BBa_K546002. 200 µL samples of reporter strain/AHL mixtures were analyzed with a Molecular Devices Spectramax M2 spectrophotometer, detecting GFP. The result is shown below. 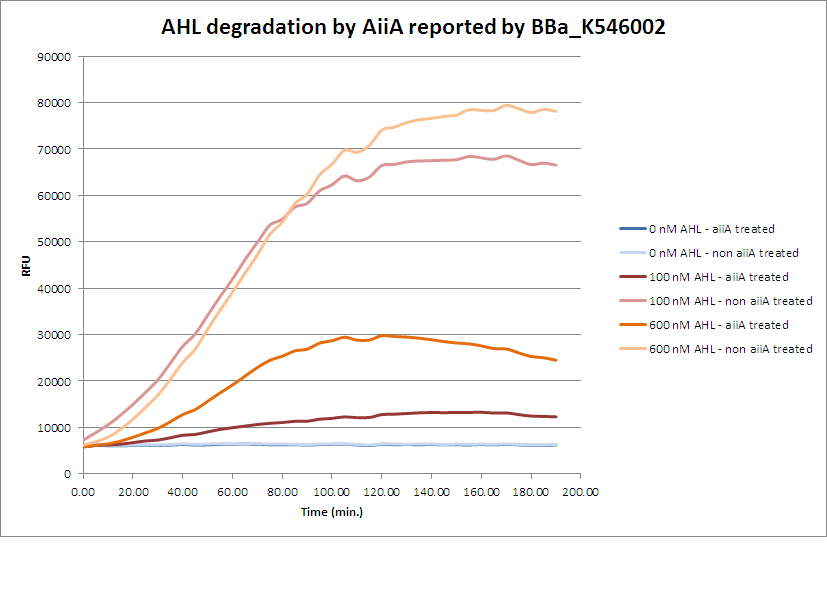 This part is functional, as AHL concentrations drop after incubation with E. coli transformed with this part. The GFP expression is much higher in the non treated mixtures, namely.