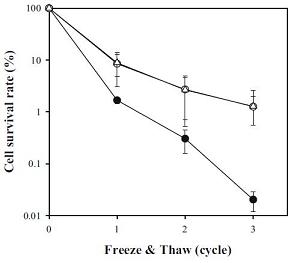 This BioBrick encodes the CspC protein of the Arctic cryophile Polaribacter irgensii. It's homologous to E. coli 's cold-induced RNA chaperones CspA and CspD, and highly similar to P. irgensii's CspA (BBa_K538003). A demonstration of CspC 's ability to increase the cold resistance of E. coli was published by Uh et al., who managed to increase the freeze/thaw cycle survival rate of E. coli more than five-fold by overexpressing this protein. (Figure 1)

This brick was developed by team Amsterdam 2011 to create cold resistance BioBricks, or CryoBricks. Because of the high similarity between the Polaribacter irgensii's CspA and CspC genes, it's expected they can be used interchangeably.

At the time of this writing, there are four protein generators incorporating either BBa_K538003 or K538004. Each of them comprises a promoter, an RBS and a coding region, but no terminator. The RBS is, in each of the four generators, the strongest of the Community Collection of RBSes: BBa_B0034. The promoter is either the Lac operon's pLacI promoter (BBa_R0010) or the pBAD derived promoter team British Columbia 2009 developed (BBa_K206000). The codes of the generators incorporating CspA and CspC are listed below.

For an up to date list of other BioBricks incorporating the CspA or CspC genes, refer to their respective related parts pages:

While exposure to low temperatures represses the expression of most proteins, cold shock protein (Csp) expression is actually induced by this. Jones and Inouye showed E. coli's CspA concentration can increase over 200-fold within 1.5 hours, when exposed to cold shock.[1] CspA functions as an RNA chaperone,[2] capable of melting stable secundary structures in mRNA, and in doing so facilitating their translation at low temperatures.[3][4] Its nucleic acid binding properties are mediated by a β-barrel structure, which is known as the cold shock domain and is common to all cold shock proteins whose structures have been clarified. In particular, two recurring motifs - RNP1 and RNP2 - are essential for cold shock proteins' ability to bind RNA.[5]

E. coli 's genome comprises a family of 9 highly similar RNA chaperones (CspA through CspI), 4 of which are cold-induced.[6] Deletion of one, two or three of the cold-induced chaperones does not affect cell viability at low temperatures, but a quadruple knock-out strain exhibits a cold-sensitive phenotype. Xia, Ke and Inouye not only made and characterised these knock-out strains, but went on to show the cold-sensitive phenotype can be repressed by overexpressing any of the remaining members of the Csp family, with the exception of CspD.[7] (Overexpressing CspD did, however, increase the cold resistance of the wild-type strain.) The apparent redundancy in the functioning of E. coli 's cold shock proteins suggests that they carry out a task which is key to cell survival.

Uh et al. identified a blind spot in the scientific community's understanding of cold shock proteins, stating the insights reported above are based mainly on studies of mesophilic bacteria. To fill this gap, they investigated a bacterium isolated from Arctic sea sediment (Polaribacter irgensii) and, following a homology-based selection procedure, cloned two of its genes (CspA and CspC) into E. coli.[8] They demonstrated expression of either of these genes can rescue the cold-sensitive phenotype Xia, Ke and Inouye observed in their quadruple knock-out. In addition to this, they show P. irgensii 's cold shock proteins drastically increase E. coli 's ability to survive freeze/thaw cycles. (Figure 1)

Taking all the above into account, team Amsterdam 2011 considered Polaribacter irgensii 's cold shock proteins to be viable candidates for the development of their cold resistance BioBricks, or CryoBricks. Unfortunately, the team wasn't able to assemble a protein generator to express CspA (BBa_K538003), but they did assemble a CspC generator (BBa_K538204).

In addition to reproducing the freeze/thaw cycle data, the CspC generator was used by its developers to see if expression of this chaperone influences E. coli 's specific growth rate at suboptimal temperatures. No significant deviation from a wildtype E. coli, or E. coli comprising an empty vector was observed.

Refer to the experience page for quantitative data of the cold resistance characterisation of BBa_K538003.

There are risks involved with enhancing bacterial cold resistance and facilitating their growth at low temperatures. Please refer to the safety page of this brick's developers.