Released HQ 2013
Sample In stock
Experience: Works
Not Used
2 Twins
Get This Part

As we (EPFL 2013 team) used the Biobrick BBa_K523013 for our project, we decided to improve it by better characterizing it. The group that made it was not able to prove with certainty that the YFP was exported to the outer membrane of E.Coli thanks to INP. In order to see the location of this fluorescent protein, we performed microscopy experiments with a confocal and also a inverted (NIKON eclipse it) microscope.

Process:
Competent cells were transformed with BBa_K523013 and grown on a plate with chloramphenicol antibiotic. From these transformed cells we made a glycerol stock and worked with plated cells from this glycerol stock.
For each experiment, cells were inoculate overnight at 37°C, in 3ml LB +chloramphenicol medium. Then cells were diluted to 0.3 OD and grown until 0.7-0.8 OD. Then they were pelleted and resuspended in 200µl PBS.

1) To visualize the protein fluorescence, we directly used this solution.

2) To confirm the localization of the protein at the cell surface, this solution of cells was incubated 1hr in a rotor, with 10µl of an anti-YFP antibody (ab6658, 1mg/ml) diluted 1:60. The samples were washed 3 times with 200µl PBS. Then the antibody was stained with 2µl avidin dylight labeled (650nm, 1mg/ml) and incubated 1hr on a rotor. Samples were again washed 3 times with 200µl.

The protein fluorescence was directly observed with a confocal microscope (Figure1) and an inverted microscope. We determined approximately 30% of the cells to be fluorescent. In the transformed cells, cluster of fluorescent specks can be seen (Figure 2). This is consistant with fact that we found in the literature ([1]) that the ice nucleation protein forms aggregates in the cell membrane. With the confocal microscope we expected to distinguish if the fluorescence was at the cell surface, but we were not able to make any difference between the cell surface and cytoplasmic expression. 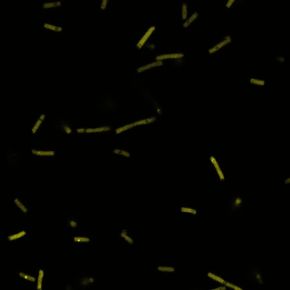 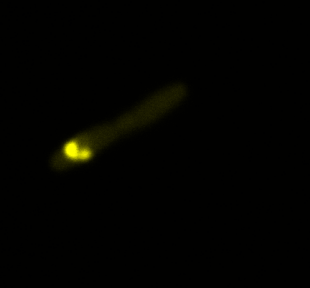 Figure 2 : Confocal image of a zoom on a single BBa_K523013 transformed DH5alpha E.Coli, excited at 514 nm(excitation wavelenght for YFP)

So, to have a clear idea of the localization, we treated cells as explained in "Process 2)" and went to look at them under the inverted microscope. The following results were observed : 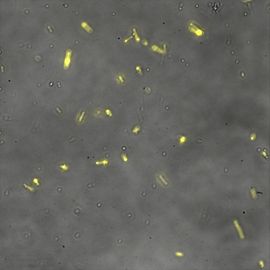 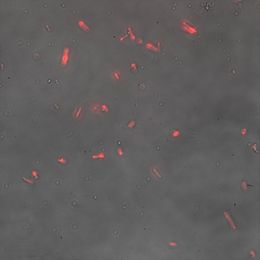 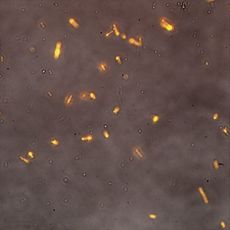 
As we can see, the antibody binds the outside of the bacteria, since it is way to large to enter the cells. The points nicely co-localize with the YFP fluorescence and prove its external localization, since otherwise antibody could not have reached it if the protein was inside the cell.

With all these proofs we concluded that the INP-YFP fusion protein is actually exported to the outer membrane of E.coli.

BBa_K523013 is function to display YFP at bacterial cell surface.
The cloning strategy can thus be used to display any protein as big as 60kDa to the Ice Nucleation Protein [1].