Lignin peroxidase is known to have dye-decolorising activity, being particularly effective when the substrates are sulphonated azo-dyes. This led us to investigate whether we could incorporate the Lignin Peroxidase (BBa_K500000) BioBrick submitted by Tianjin iGEM 2010 into our project and provide further characterisation; there was no available data in the Registry regarding to the functionality or viability of this fungal part in E. coli.

The sequence for this part, found here, was codon-optimized for E. coli K12 and synthesis was requested along with the BioBrick prefix and suffix. While we were able to get this fragment synthesised and sent to us, the toxicity of the DNA fragment in E.coli prevented us from obtaining any decolourisation data. However, we were still able to further characterise the experimental issues of (BBa_K500000) in E.coli.

The gene synthesis was carried out by GeneOracle, who provided us with data for the toxicity issues that they encountered. In summary, in-vitro synthesis presented no particular problems, but when the sequence was cloned into the destination strain, the sequence was modified with a number of mutations, deletions, and modifications, that made it impossible to recover the original gene. Cloning was attempted on a pGOv4 plasmid; detailed information about this plasmid can be found in the files below.

Figure 1 - Lignin Peroxidase BBa_K500000 BioBrick is toxic in E.coli DH5α. Graph showing that while it was possible to confirm the successful synthesis of BBa_K500000 in vitro, it was not possible to carry out any in vivo transformations of the DNA fragment into E.coli DH5α.

The toxicity issues that arise when trying to express this fungal enzyme in E. coli can explain why no previous attempt to characterise the part recorded in the registry have been successful. Further characterisation of this toxicity, as well as attempting to troubleshoot it, could involve the subcloning of the part into a low-expression vector.

The inability to characterise the decolourising abilities of Lignin Peroxidase made us look towards a bacterial alternative; Bacillus subtilis dye-decolorising peroxidase. This enzyme, described in literature as the bacterial equivalent of lignin peroxidase due to the similarity of their mechanisms was cloned successfully, and the data regarding its toxicity and ability to decolorise azo-dyes is developed below.

Synthetized by Geneart Lignin peroxidase (Lip) is a monomeric haemoglycoprotein secreted by wood-degrading fungi, such as the white wood-rot fungus Phanerochaete chrysosporium.The study of Haemmerli and Hammel in 1986 found that Lignin peroxidase have many substrate,mainly including the non-phenols and phenols aromatic compouds.It can oxidizes lignin monomer, two,three bodies and polycyclic aromatic hydrocarbons.The degradation of the substrate features is that lignin peroxidase can oxidize non-phenols and phenols compounds which rich in electronics.Lignin peroxidase can capture an electronic from the benzene ring when those attacking the substrate by eletron carrier.And then,lip can oxidize the substrate into free rdical and through chain reaction to generate kinds of radical. Those reaction above would lead to the main bond cleavage of the substrte molecule,and then following a series of cracking reaction.

This year we selected lignin peroxidase (Lip) and manganese peroxidase (Mnp), which are non-specific lignin-structure decomposing enzymes produced by white rot fungi. It can effectively degrade PCBs, PAHs, DDT, fuels, explosives, other chlorides and azides in wastewater and soil.

This year we selected the lignin peroxidase (BBa_K500000) and manganese peroxidase (BBa_K500001) from iGEM10_Tianjin in 2010. They are expressed in yeast and can oxidate phenol type which are rich in electronic or non phenolic aromatic compounds, since the electron transport system can attack substrates. After that, it can take an electron from phenol or benzene rings of phenols to oxide subsrances into free radicals, which in turn to produce many different kinds of free radical chain reactions, thereby tetracycline.can be degraded and eliminated.

However, in our preliminary experiments, we found that they could hardly be expressed in E. coli. 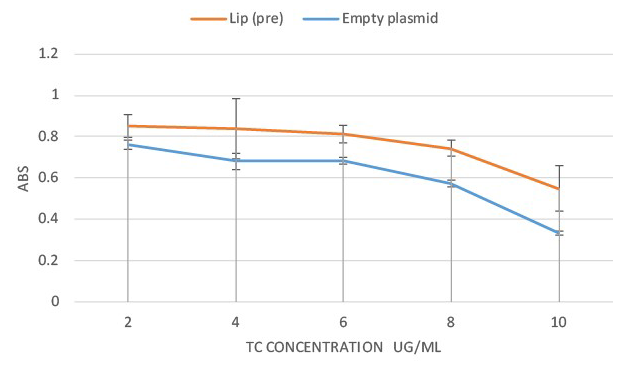 Fig.1 the growth curve of the E.coli with BBa_K500000:and empty plasmid under tetracycline environment

Therefore, we optimized the codon to make it be highly expressed in E. coli. After verification, we got the following graph which indicated that the parts we constructured with optimized codons can work productively and efficiently. Thus, we use these two enzymes as a benchmark to construct a part: BBa_K2685011 Part: BBa_K2685012 Part: BBa_K2685013. Finally, we found that lip enzyme has the best and the most desirable effect of degradation