T7 expression systems are capable of producing a wide range of proteins in E. coli. Improvements to overexpression with clean harvest can be done under T7 control and using eCPX as an outer membrane. amilCP is a display protein of interest used to measure the yield of protein produced by the system. This composite is one of two that will be working to generate a CHOP system. Characterization of two expression systems (between T7 and non T7) is measured to select the best blueprint for the CHOP system. Characterization of the overall system contributes to improving the new era of protein overexpression.

This composite aims to know the feasibility of using the T7 expression system for overexpressing the pigmented protein known as chromoprotein (amilCP), and by utilizing the terminal display scaffold eCPX will be localized on the outer membrane of the E.coli host.

One of the most widely used prokaryotic protein-producing systems uses the T7 phage polymerase that recognizes the T7 phage promoter. The T7 promoters have contributed to 63% of all unique membrane protein structures. Although the previous system is proven to permit high levels of target protein, however the system is not without its problems, especially a gradual decrease in the expression levels of the target gene and complicated downstream process. The novel CHOP system created was based on an amilCP-eCPX fusion with T7 expression cassette designed to maximize the production levels of the target protein with a clear downstream process using autocleavage TEV protease-TEV cleavage site. The existence of TEV Cleavage as a cutting point for TEV protease and linker so that the developed system can be clean without any downstream processing [2,3].

The second goal of the CHOP project is to characterize different expression systems to maximize the production levels of the chromoprotein to overexpression. This composite is designed through the T7 expression system, as the first step to confirming the insert is through electrophoresis to find out the ideal PCR condition.

Figure 1. Electrophoresis of inserts amilCP-eCPX fusion with T7 expression from optimization gradient PCR of 25 µL, resulting in 62°C as the optimal temperature for the annealing process with a DNA weight of 1386 bp and a thin other bands of impurities. Nanodrop = 27ng/µL 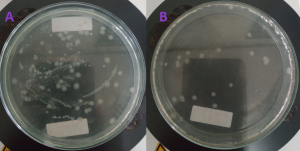