Angiogenin (Angiogenin, ANG) belongs to the secreted ribonuclease superfamily, and was originally discovered to be an angiogenic factor derived from human tumors. Subsequent studies have shown that ANG is also present in normal human tissues and body fluids. ANG increases the transcription of ribosomal RNA (rRNA) in the nucleus, while vascular endothelial growth factor (VEGF) and fibroblast growth factor-2 (FGF-2) activate mTOR and S6 kinase pathways to promote protein synthesis. Therefore, ANG can cooperate with VEGF and FGF-2 to promote protein synthesis in endothelial cells. In addition, ANG is necessary for endothelial cell proliferation. In addition to promoting angiogenesis, ANG is also involved in many other physiological and pathological processes, such as neuroprotection, inflammation, and tumorigenesis. Loss of function mutations in the ANG gene have been found in both amyotrophic lateral sclerosis (ALS) and Parkinson's disease (PD). According to literature reports, heparan sulphate proteoglycans (HSPGs) are required for ANG to enter cells. HSPGs are linear anionic glycosaminoglycan (GAG) chains covalently linked to the core protein, composed of disaccharide repeating units of uronic acid and glucosamine, and the glucosamine residues 3-OH, 6-OH and -NH And the 2-OH of uronic acid is replaced by a sulfate group. HSPGs exist on the plasma membrane of all animals and are the main component of the extracellular matrix. Factors such as size, location, degree of sulfation, and uronic acid in different cells, tissues, and developmental stages contribute to the structural diversity of heparan sulphate (HS). This structural diversity is the basis for HSPGs to perform multiple functions. In previous research, our laboratory constructed a library of HS mutant mouse lung endothelial cells by knocking out key genes in the HS biosynthesis process. In this study, we prokaryotic expression and purification of recombinant ANG protein, using heparin and heparin derivatives and HS mutant mouse lung endothelial cell library to perform enzyme-linked immunosorbent assay and flow cytometry experiments to explore the interaction between ANG and HS The specificity and clarify its structure-activity relationship.

During our process of reading massive public literature on the matter, we came across a relatively new concept, Angiogenin(ANG) protein, a secreted ribonuclease. According to the review, Angiogenin has been recognized to play important roles in various physiological and pathological processes, especially in neurodegenerative diseases. The loss-of-function mutation of the ANG gene is likely to be an important cause of certain nervous system diseases such as PD. Therefore, we realized that the delivery of active angiogenin protein could reduce neurodegeneration and could possibly be used as a clinical treatment once we correctly inject the protein. 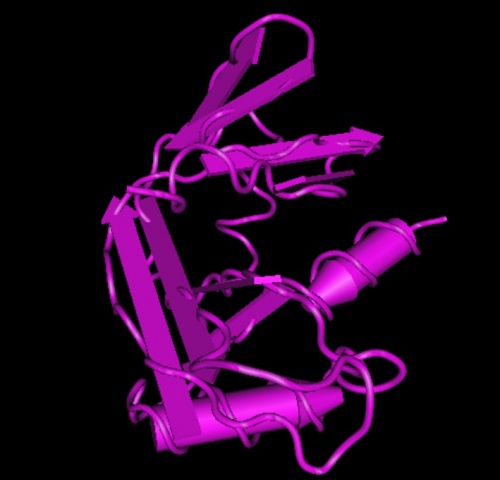 Angiogenin, which is made up of 123 amino acids, can be an inducer of neovascularization, and it contributes to cell migration, invasion, vessel elongation, and neuroprotection. It is produced by a spectrum of cell categories, such as the vascular endothelial cells and smooth muscle cells, and it can be recognized by the endothelial cells and elicits second messenger systems. It is potent to cure neuro-diseases like Parkinson’s Disease and Alzheimer’s Disease, but it might stimulate the formation of a tumor, which contributes to cancer. Since a lack of angiogenin might promote cell death, a specific dose should be established.