In modern society, more and more people suffer from mild or severe depression. It has been reported that malondialdehyde (MDA) level in the plasma of depressed patients is significantly increased. After receiving conventional antidepressant treatment, the patient's MDA level decreased to the same as that of healthy people. Therefore, researchers believe that oxidative stress may play an important role in the occurrence and development of depression, and the activity of antidepressant therapy may be mediated by improving oxidative stress/antioxidant function. We attempt to express an antioxidant enzyme system (peroxidase gene efeB) in the cell or on the surface of the engineered probiotic bacteria to inhibit the production of malondialdehyde (MDA) by human cells and prevent cell oxidation from causing health damage to the body. So as to prevent or alleviate the condition of depression. The oxidation rate of peroxisome increases in proportion to the increase of oxygen tension. Especially in the case of high oxygen concentrations, the oxidation reaction of peroxisomes dominates. This characteristic allows peroxisomes to protect cells from the toxic effects of high concentrations of oxygen. efeB reduces the oxidative stress in the cell by competing with mitochondria for oxygen, and reduces the MDA produced during the oxidation of lipids.

Figure 1. Action and function of efeB in MDA reduction... 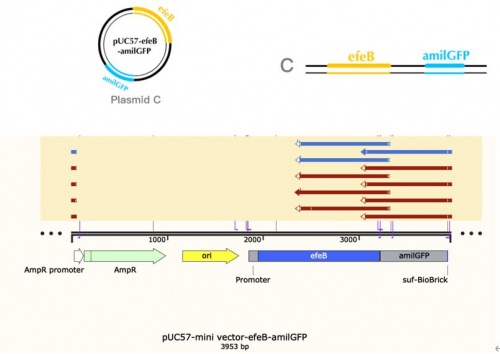 Peroxidase EfeB, originally studied as a substrate of the E. coli "double arginine" translocation system, is the first recognized peroxidase for bacterial dye decolorization. Subsequent studies have shown that EfeB is a peroxidase with heme as a prosthetic group, and has a specific iron transport function.We use E. coli as the starting strain and construct an engineered strain of efeB to explore the effects of efeB on bacterial growth, malondialdehyde concentration, ROS synthesis and antioxidant pathways under different oxidative stress conditions.

The T7 promoter is often used for protein overexpression. It is powerful and specific. It is completely controlled by T7 RNAP. When T7 RNAP is present in the cell, the T7 expression system occupies an absolute advantage compared to the host expression system. Its expression The speed is 5 times that of the former.

This part is useful as a reporter and it naturally exhibits strong yellow color when expressed. 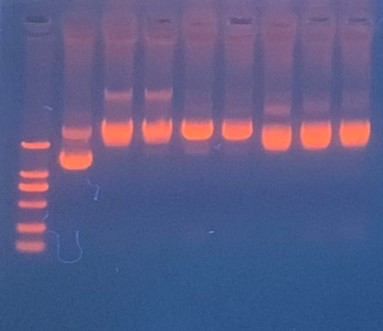 This step is used to test if the plasmids efeB-amilGFP extracted from the E. coli DH5α are successful and could be used to do double enzyme digestion later in the process. Channel2-8: efeB-amilGFP succeeded

The growth of engineering bacteria under H2O2 treatment conditions 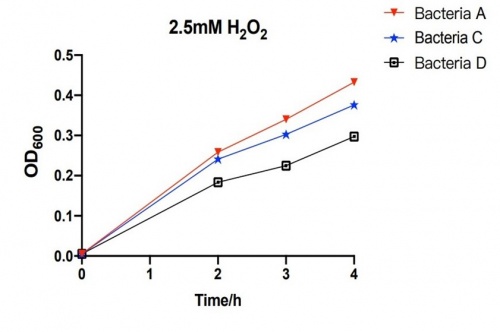 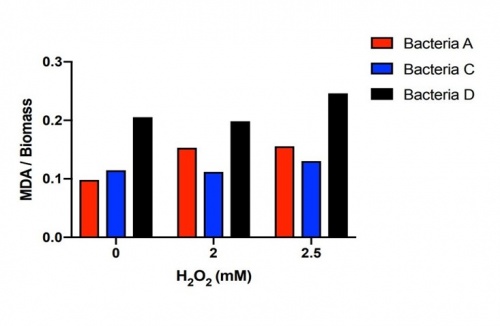 Figure 5. Histogram of MDA in the systems with different H2O2 concentration of bacteria A, C and D... 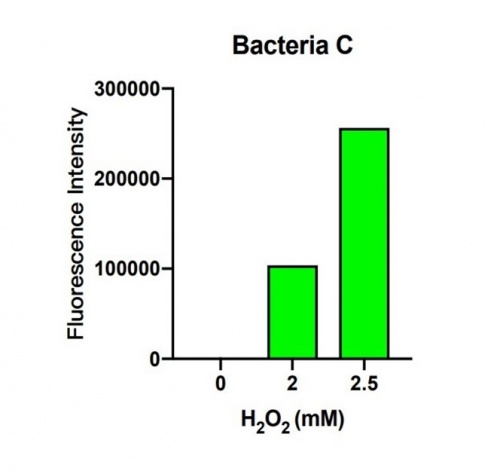 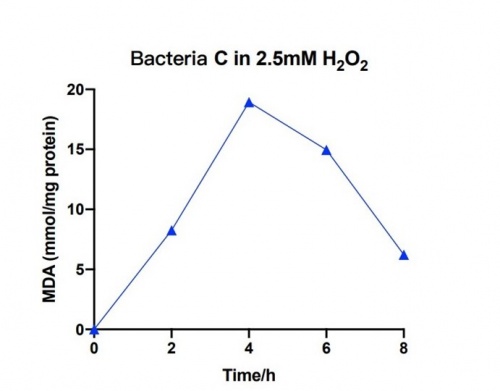 Bacteria C was placed in the 2.5nM hydrogen peroxide solution, and the level of MDA was measured under different hours. During the first 4 hours, the concentration of MDA increased up to 20 mmol/mg. The concentration of MDA decreased to 6 mmol/mg for the next four hours. The measured levels of MDA demonstrate that the efeB gene can curb the increase of MDA and keep it in a relative low level.

In order to deeper analyze the factors which may affect the ability of bacteria C and bacteria A to inhibit MDA production, more function tests would be designed and conducted in future.

Improvement of an Existing Part

Compared to the old part BBa_K592010, expressing GFP, we design a new part BBa_K3983003, which is expressing Peroxidase (efeB). The BBa_K592010 part is useful as a reporter. Peking iGEM 2016 has fused this part with triple spytag. The fused protein is participate in Peking’s polymer network. By adding this protein, the whole polymer network become visible in most conditions. The difference is that our goal is to build an engineered bacterium that can produce peroxidase efeB, which can reduce excessive reactive oxygen species produced in patients with depression by producing peroxidase, thereby reducing the possibility of depression. We chose efeB, which sequence is different from BBa_K592010 (Fig8), to construct our desired engineering strain.

First of all, we constructed a composite part BBa_K592010, and transformed it into E.coli DH5a. We successfully expressed and purified GFP protein , and detected the enzyme activity. Furthermore, in order to optimize the function of BBa_K592010,we constructed an improved composite part BBa_K3983003, which can participate in the redox process in the organism, reduce the occurrence of oxidation process, thereby reducing the active oxygen in the body of patients with depression to a certain extent.

In addition, we select a kind of probiotics E.coli DR5α as the host. Therefore, our engineering strain was a strong potential drug that can be eaten by patients for ROS and reduce the incidence of depression in patients.