Bacterial fatty acid synthase (FAS) system enzyme, codon optimized for S.Cerevisiae. Part of the FAS2 system from E.coli, see our wiki for an overview of the system.

FabI reduces the double bond alkene in the conjugated system by consuming one equivalent of NADPH. Here, the synthesis will either be interrupted by cleavage of the thioester-ACP bond by a thioesterase, determining the length of the fatty acid, or it will be elongated by addition of acetyl-CoA, continuing the cycle from FabB. 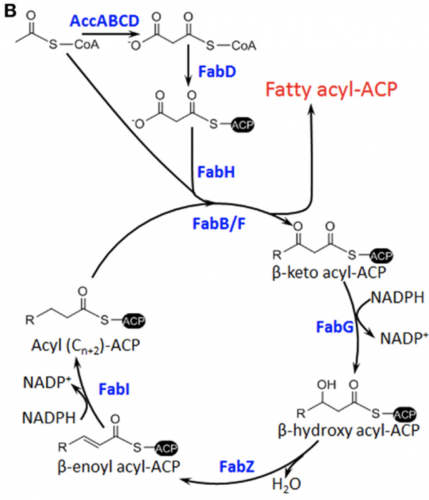 By creating a single genetic fragment with FabI and FabG and their promoters going in the forward and reverse direction, these two genes are easily inserted using the pCfB3039(XII-2 MarkerFree) plasmid from EasyClone kit (3).

Double gene fragment ordered from IDT was cloned using Phusion polymerase according to protocol. Insert was purified following protocol for gel electrophoresis and ThermoFischer gel purification kit, followed by assembly into linearized plasmid backbone. The constructed plasmid was transformed into E.coli, grown overnight, inoculated overnight again, followed by harvesting following protocol for ThermoFischer plasmid miniprep kit. The purified plasmid was digested to yield the linearized insertion fragment and transformed into S.Cerevisiae strain CEN.PK 102-5B along with CAS9 and gRNA plasmids.