To assure continuous and efficient naringenin production, we had to guarantee the proper expression of naringenin synthesis enzymes in our probiotic strains. To reach the maximum efficiency of the natural synthesis pathway, we decided to manipulate the expression rates of these proteins by finding the promoters of optimal strength for the expression of each of these enzymes.

The Lactobacillus acidophilus ATCC 4356 slpA promoter demonstrates the highest levels of transcription in all Lactobacillus strains examined in the study conducted by A. McCracken and colleagues. Combined with data from other researchers indicating that the slpA promoter is highly efficient in the natural host and in L. casei ATCC 393, this suggests that the slpA promoter sequence harbours motifs that interact effectively with RNA polymerase of several lactobacilli. This has striking implications for the development of heterologous gene-expression cassettes in lactobacilli by offering a powerful tool for achieving high levels of foreign protein production [1].

We engineered a metabolic pathway for naringenin production in E. coli Nissle 1917 by using mathematical modeling to pick promoters. SlpA promoter was used to produce the enzyme responsible for the bottleneck reaction as this sequence was the strongest one of the ones that were evaluated.

Promoter strength was estimated by measuring how intensively the E. coli Nissle 1917 transformants can produce super folder GFP (sfGFP) under the promoter of interest. Fluorescence intensity was evaluated by dividing the intensiveness of the signal by the OD600 of the medium during the course of 7 hours. The greater ratio would indicate the stronger promoter, in this case - slpA (Fig. 1). 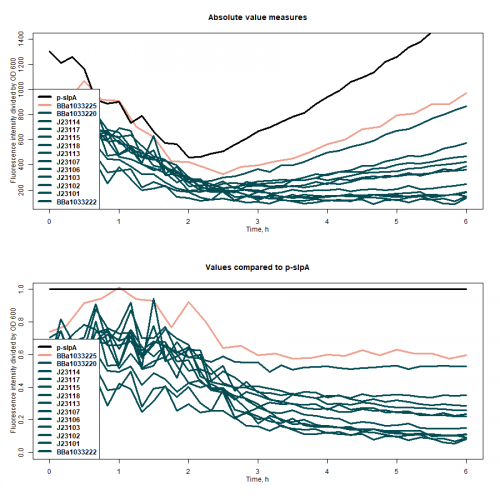 The promoter strength measuring data was compared between all the promoters of our interest taking the strongest splA promoter as a reference point (Table 1).

Two sequences demonstrating the greatest sfGFP expression rates, the strongest one being p-slpA, were compared to generalized expression intensity of the remaining weaker promoters. Seeking better insight, the expression acceleration and velocity under slpA and BBa_1033225 promoters were also evaluated. The results showed that besides being two strongest indicated promoters, these sequences also share similar expression dynamics (Figure 2). 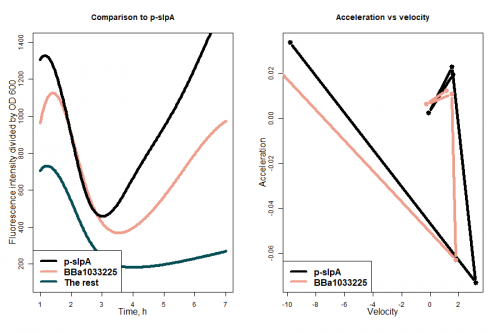 Particularly in our project, we needed to insert the metabolic pathway for naringenin production into the genomes of our target probiotic strains using the CRISPR-Cas9 system. We have chosen two genomic sites for genomic insertions, which would do not harm or negatively affect our probiotic bacteria growth or overall performance - a putative colicin-encoding and nupG genes. We have inserted sfGFP encoding gene under the control of constitutive slpA promoter into these sequences. sfGFP fluorescence was significantly higher in samples with insertion in nupG, however, this case also demonstrated significantly higher fluorescence fluctuations in comparison with putative colicin samples (Figure 3). 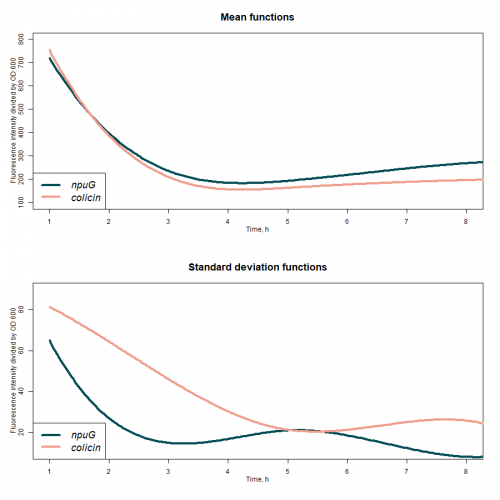