To prevent our genetically modified probiotic bacteria from escaping the intestine to the environment, they were provided with the disabling mechanism, which could be activated after exposure to some environmental factors. This goal was obtained by implementation of the newly described type II toxin-antitoxin (TA) system VapXD from non-typeable Haemophilus influenzae [1].

Bile-regulated and cold-inducible VapXD kill-switch is a composite part that was designed to ensure two-factor control over GMO probiotics spread from the human intestine to the environment. If probiotic bacteria are present in the intestine where bile-salts occur, and temperature is around 37 °C, bile-regulated promoter induces anti-toxin production, as cold-inducible promoter activity is inhibited. However, if bacteria escape, a bile-inducible promoter is inhibited, as cold-regulated promoter causes greater toxin production and lowers bacteria’s chance of survival.

First of all, this part was characterized in a plasmid construct. Series of plate reader measurements of OD600 were performed while changing conditions in LB media (see the 1 Table).

What is more, 10 times serial dilutions of bacteria were performed with the start point of OD600=0.2. As controls for this experiment, bacteria that either produce only anti-toxin or toxin were used. In analogy, the same measurements were performed with bacteria containing such construct in their genome. 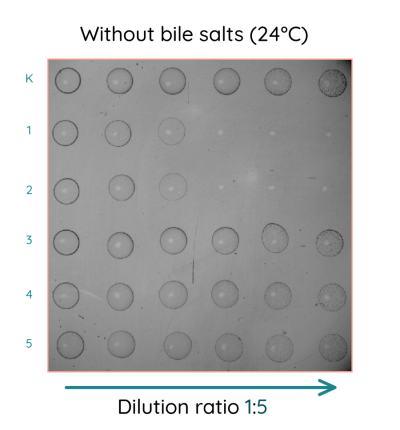 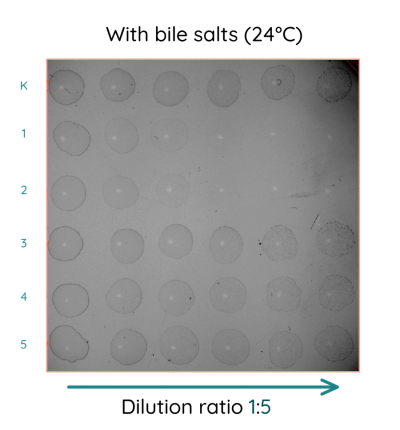 ​Further VapXD kill-switch performance was tested in liquid medium, as OD600 measurements were performed. First of all, VapD toxin (BBa_K3904000) activity was characterized while regulating its production with cold-induced promoter (BBa_K3904003). Graphs at the top of figure 3 illustrate bacteria growth without toxin and graphs at the bottom with the toxin in different temperatures. While comparing obtained data in 37 and 24 °C, temperature change can be seen as inducing greater toxin production and cell death. On the other hand, VapX activity is not fully accurate due to the leakage of the promoter during the temperature change from 37 and 24 °C.

When results in 37 °C obtained with different OD600 values were averaged (fig. 5 “Mean comparison with/no bile 37 °C), the difference between measurements with and without bile salts appeared to be mathematically insignificant. 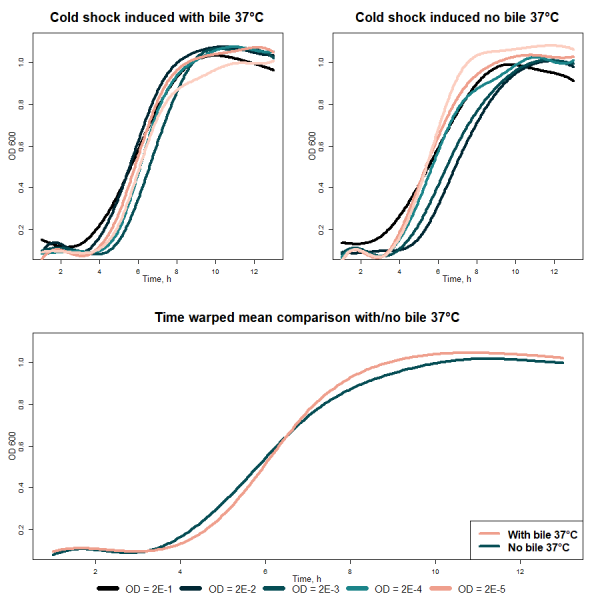 The activity of different promoters before VapX toxin was compared without bile salts supplementation in media at 37 °C. From promoters’ strength evaluation measurements (fig. 6), it was seen that the p-slpA promoter (BBa_K3904712) is the strongest in our inventor. VapXD assessment also showed that under this promoter, toxin production is more significant than under other promoters. The sloping graph rise illustrates this because more toxin is produced, and bacteria growth is inhibited. However, after the results were averaged, no significant difference between different promoters was seen. 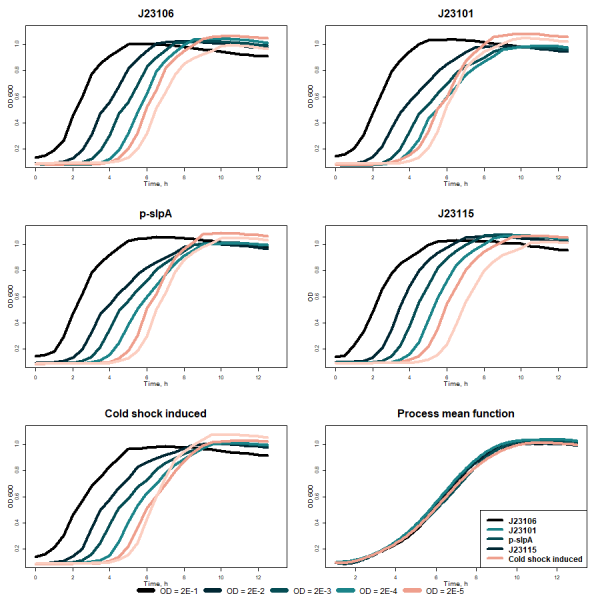 Fig. 6 Comparison of VapXD kill-switch with different promoters before toxin (without bile salts in 37 °C)

While comparing results with different promoters in 24 °C, no significant difference can be seen (fig. 7). 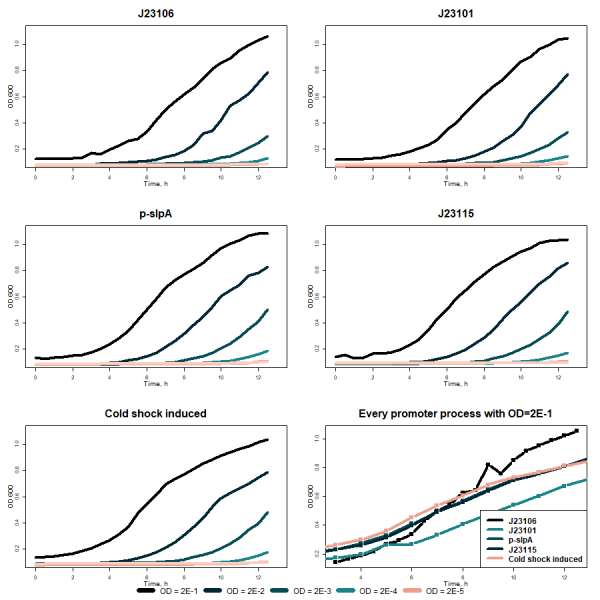 Fig. 7 Comparison of VapXD kill-switch with different promoters before toxin (without bile salts in 24 °C)

VapXD kill-switch inserted in E.coli Nissle 1917 genome was also characterized by OD600 measurements. The results of the genomic construct were compared to the plasmid construct.

The first observation from fig. 8 was that bacteria containing construct in the genome grow more exponentially. It does not have to maintain antibiotic resistance and the burden for the cell lowers. 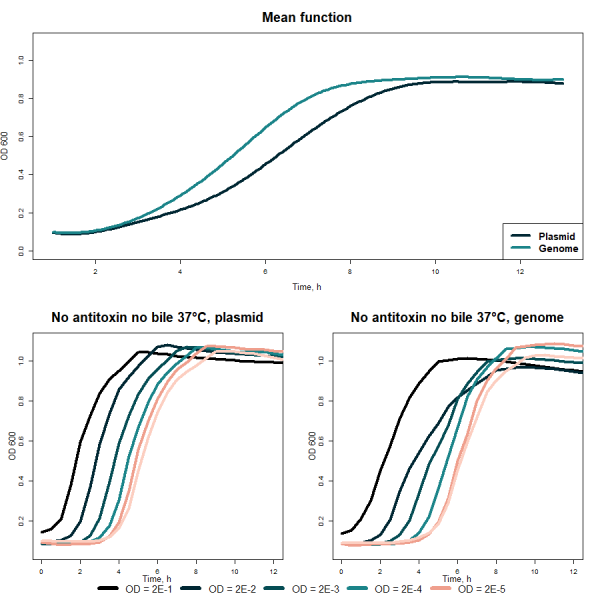 As shown in fig. 9 no significant difference in the VapXD kill-switch performance was seen while comparing results of the genomic and plasmid constructs with the same promoters. 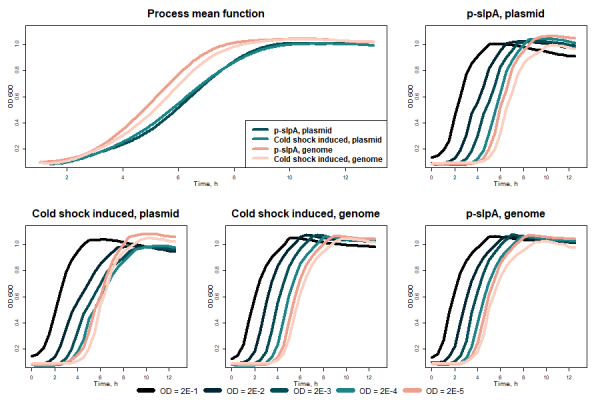 Fig. 9 VapXD kill-switch performance with the same promoters in the genome and in the plasmid at 37 °C

While comparing results obtained during the measurements with and without bile salts (fig. 10), no significant difference was seen. This once again indicates promoter leakage and the system's inaccuracy.

Fig. 10 VapXD system performance in the environment with and without bile salts