Under the influence of the P70 promoter, the transcription factor σ28 is produced and activates expression from the P28 promoter

P70-σ28 is a significant part of genecircuit where P70 can be regulated by the σ70 factor present in Cell-Free system. The rest of the parts in the gene circuit are dependent on the expression of the σ28 factor to initiate expression.

Since P70-σ28 provides σ28 for the remaining gene circuit, this element is the base component for the experimental part. To verify whether our constructed part can achieve the desired effect in Cell-Free system, we bound the P70-σ28 factor to the reporter molecule P28-tetO-deGFP and observed the fluorescent protein intensity. 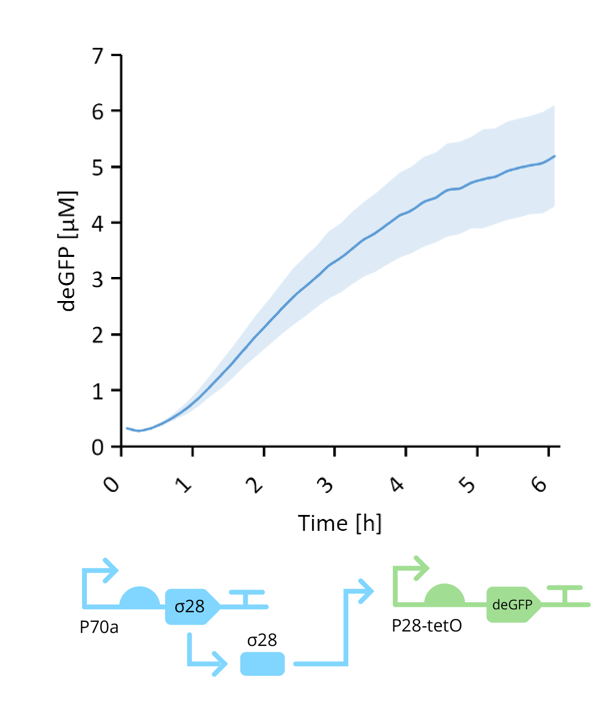 As seen by the data, high-intensity fluorescence was produced, proving that our base part P70-σ28 works as desired.

Our goal is to use Cell-Free systems to detect RNA. Therefore, we consider the design of gene lines that are best adapted to Cell-Free systems. Reviewing the literature we obtained that Cell-Free system carries its own σ70 factor, so the promoter of our part should be the promoter P70a regulated by the σ70 factor.[1] And we also intend to use the gene circuit to produce the repressor protein, and we found data demonstrating that the tetR gene expressing the repressor protein can achieve better expression when it is influenced by the P28 promoter. Therefore there should also be a promoter P28 present in the system that is initiated by the σ28 factor. Thus we need to construct a base part that connects the Cell-Free system to the gene circuit we want to implement. P70a-σ28 part fits perfectly with what we expected.