As context we must point out that for our CRISPR-Cas ensemble to be a detection system, what we did was to add a reporter to the media where the Cas may become active. The basis relies on LbCas12aŌĆÖs special property of collateral trans cleavage activity. That means that when it recognizes the specific target sequence determined by the designed gRNA with which it is coupled (thus becoming active) it unspecifically cuts not only the target DNA but also any dsDNA present in the media. In this way, whenever Cas is activated, fluorescence arises because the reporter is cut and releases the fluorescent molecule. All this is step-by-step indicated in Figure 1. 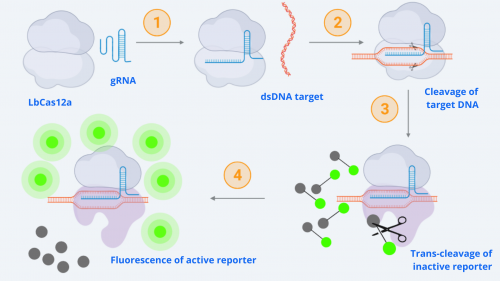 We did not perform any experiments with the gRNA Ampicillin construct (BBa_K3791010) nor Efficient gRNA Ampicillin construct (BBa_K3791020), because of an impairment of its design. It was observed that colonies and cultures for these constructs were not viable. This led to a review of the design of these particular parts. It was hypothesized that the assembled gRNA-Cas12a cleaving was targeting the plasmidŌĆÖs selection resistance gene, in this case, Ampicillin (see Figure 2). Cleavage of this particular sequence made the resistance gene unfunctional, provoking the cellŌĆÖs death when cultured with the aforementioned antibiotic. This event actually proved that the gRNA-Cas12a was functional and able to cleave the targeted sequence, which is an important proof of our system viability. Our error in the gRNA design allowed us to verify biosensors functioning. 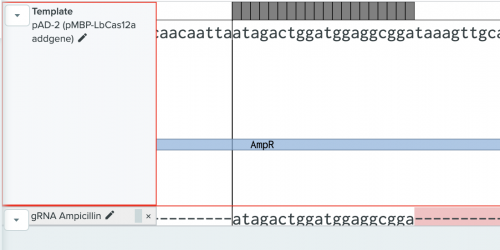