This part is AmpR, an E. coli gene coding for a β-lactamase enzyme. It is a derivative of the TEM-1 β-lactamase (Uniprot P62593) with two mutations V82I and V182A. In addition, compared to the sequence found in pSB1A2 from which it was derived by PCR amplification, a synonymous mutation S240 (TCC->TCG) and a non synonymous mutation were detected L223I (CTT->ATT) that did not affect the capacity of this enzyme to confer resistance to ampicillin when expressed in Escherichia coli.

AmpR is a protein associated with the resistance mechanism against the large family of β-lactams, antibiotics which include the well known penicillin and ampicillin.

Figure 1. The mode of action of β-lactamases: hydrolysis of the β-lactam ring.

Fortunately, among all the subgroups of β-lactams (table 1), some have less affinity with the β-lactamase(s) and overcome this resistance. For example, in monobactams, Aztreonam is known to have a bactericidal effect even on bacteria carrying the AmpR gene [1]. We confirmed this experimentally by testing the resistance of the bacteria carrying AmpR to different β-lactam antibiotics (Figure 2). 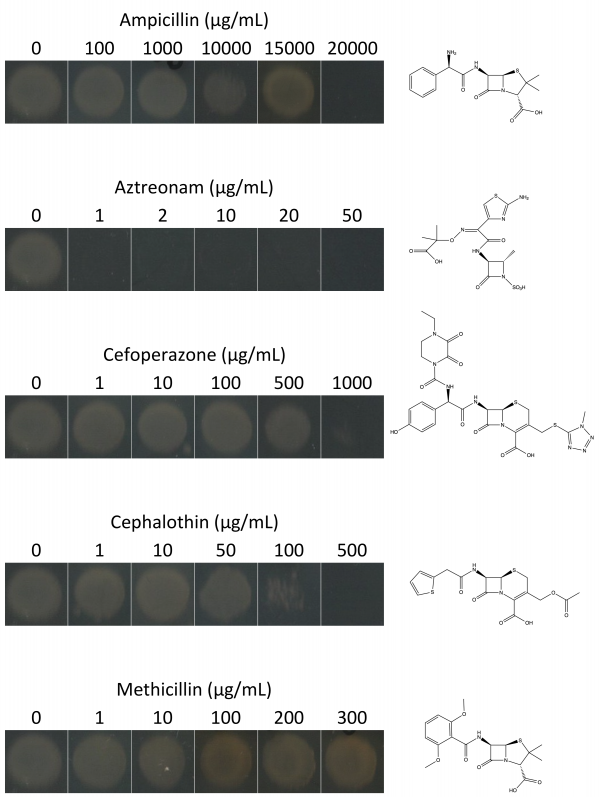 To further understand the impact of each mutation on aztreonam resistance, the IC50 values were estimated and compared to those of AmpR and chassis cells, E. coli NEB5ɑ. For this, E. coli NEB5ɑ cells were first transformed with AmpR in the composite BBa_K3766111 (in pSEVA73 backbone), then grown overnight in 96-deep-well plates containing 1 mL of LB medium supplemented with 10 µg/mL trimethoprim, then diluted by 40x into similar media. Upon reaching early log-phase, cells were further diluted 20x in 100 µL of LB medium supplemented with increasing concentrations of aztreonam (0.005 to 10 µg/mL) in a transparent 96-well polystyrene microplate (Sarstedt). The plate was incubated at 37 °C at 200 rpm and OD600nm was measured every 10 min for 24 hours in a CLARIOstar (BMGLabtech) or Infinite 500 (Tecan) plate reader. The OD600nm values at the time-point when the cultures performed in the absence of aztreonam reached the stationary phase were plotted as a function of the antibiotic concentration. These dose-response curves were fitted using the AAT Bioquest, Inc., Quest Graph™ IC50 Calculator to the sigmoidal équation:

where OD600nmmin represents the minimal OD600nm, OD600nmmax represents the maximal OD600nm, C is the concentration of the antibiotic, IC50 is the antibiotic concentration that inhibits 50% of the bacterial growth, Hill coefficient is describing the steepness of the curve. The OD600nm values were converted into equivalent particles using the calibration curves presented on the "Measurement" page of our wiki.

For AmpR, the aztreonam IC50 value was estimated at 0.015 µg/mL (Figure 3A), while the Aztreonam IC50 of the strain expressin AmpR was of 0.034 µg/mL aztreonam. 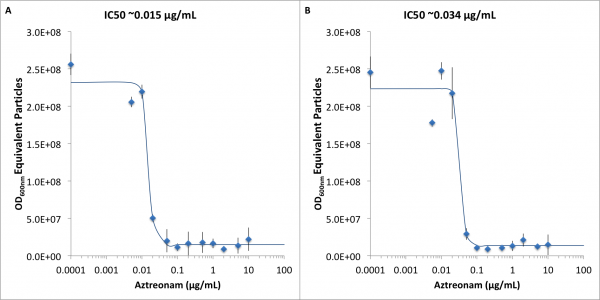 Figure 3. Dose-response curve used to calculate the IC50 value of aztreonam of NEB5alpha (A) and E. coli with AmpR gene (B).

[3] Ramsey C, MacGowan AP. A review of the pharmacokinetics and pharmacodynamics of aztreonam. The Journal of Antimicrobial Chemotherapy (2016) 71: 2704–2712.