FadE, which is also called acyl-CoA dehydrogenases , catalyze the first reaction of β-oxidaion

FadE, which is also called acyl-CoA dehydrogenases , catalyze the first reaction of the b-oxidation cycle. All acyl-CoA dehydrogenases carry noncovalently (but tightly) bound FAD, which is reduced during the oxidation of the fatty acid. As shown in Figure, FADH2 trans- fers its electrons to an electron transfer flavoprotein (ETF). Reduced ETF is reoxidized by a specific oxidoreductase (an iron–sulfur protein), which in turn sends the electrons on to the electron-transport chain at the level of coenzyme Q. The mitochondrial oxidation of FAD in this way eventually results in the net formation of about 1.5 ATPs. The mechanism of the acyl-CoA dehydrogenase involves deprotonation of the fatty acid chain at the a-carbon, followed by hydride transfer from the b-carbon to FAD. 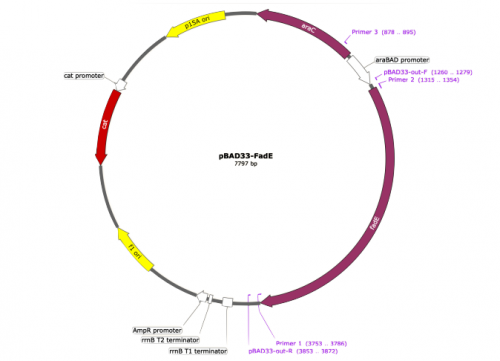 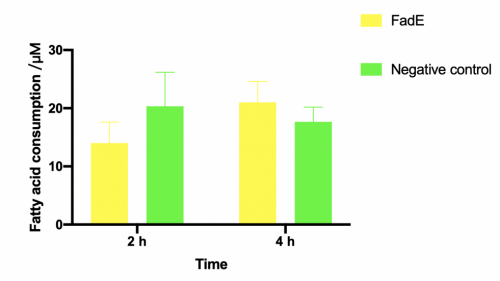 In order to explore the reasons for the failure of the experiment, we detected the protein expression more carefully. After inducing the expression of FadE proteins, they were purified by Ni2+ affinity chromatography column. After purification, SDS-PAGE results showed that the molecular weight of our target band was about 20 kDa lower than our predicted value. It is speculated that the engineering strain we used is E. coli DH5 α. The endogenous protease system of this strain has not been artificially knocked out, so the overexpressed protein is easy to be degraded. Considering this possibility, we replaced our engineered strain with E. coli BL21 strain. Then we purified the protein by Ni2+ affinity chromatography column and detected it by SDS-PAGE. The results showed that the bands of FadD and FadE protein were in line with our prediction.