This expression construct can be used in the assembly of a CBH gene cassette containing Modified PfCBHI (BBa_K3629013), NcCBHI (BBa_K3629014), and TrCBHII (BBa_K3629012). This gene cassette is then intended to be transformed into Y. lipolytica to create a CBH- producing strain. This strain should then be co-cultured with two other strains with a EG or BGS gene cassette. The three strains together will be able to survive on cellulose media. 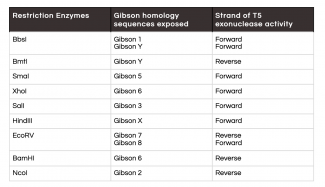 The native signal peptide from T. reesei was removed so it would not interfere with the fused Lip2 secretion tag native to Y. lipolytica.

To use this part in the various Gibson assemblies, it must first be digested by a specific restriction enzyme to expose the end of a specific Gibson homology sequence for T5 exonuclease (see table 1 to see which restriction enzymes expose which Gibson homology sequences). Furthermore, this part, and any accompanying parts, must be assembled into a destination vector containing BBa_K3629015 (nourseothricin resistance expression construct) using the Gibson 1 and 2 homology sequences. Following assembly with BBa_K369015, the full gene cassette can be linearized with NotI and transformed into Y. lipolytica with the nourseothricin selection marker (figure 1). To watch a short animation on how this works click here.

Figure 1. Assembly of multiple expression constructs into one gene cassette using the nourseothricin resistance construct (BBa_K3269015) as the destination vector. 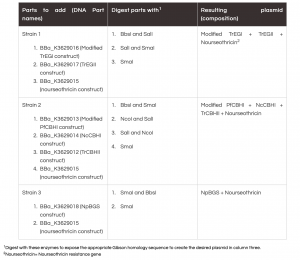