We chose the PmrA-PmrB two-component system as the carrier of our detection module. As carrier of the core binding domain of ACE2, PmrA-PmrB system exists in Salmonella and most strains. The system is a regulatory system sensitive to Fe (III) originally (Fig. 1), which contains a histidine kinase (HK) on the membrane part PmrB to sense specific environmental stimuli, as well as a corresponding response regulator (RR) PmrA to mediate cellular responses. 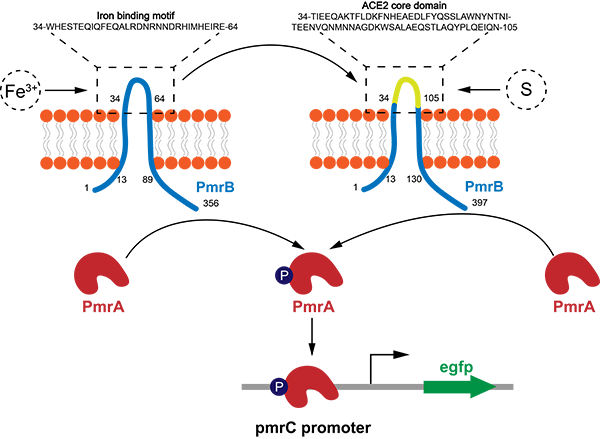 Figure. 1 The PmrB Fe(III) binding motif was replaced by ACE2 core binding domain, which give the PmrB the ability of sensing S protein.

The target of detection is S protein, the monomer of homotrimeric spike glycoprotein on the envelope of SARS-CoV-2, which is responsible for binding to human cell receptor angiotensin-converting enzyme 2 (ACE2) [2]. The S1 subunit of S protein, responsible for recognizing ACE2, is an essential part of the virus in fusing its own envelope with the cell membrane. By reviewing the data, we found that in the complex protein of ACE2 and S protein, the core binding domain of ACE2 was concentrated between Thr20 and Asn90, while the RBD of S protein was Thr333 to Gly526 of its S1 subunit (Fig. 2). Therefore, we intercept the polypeptide sequence of this segment of ACE2 as our core detective binding domain. 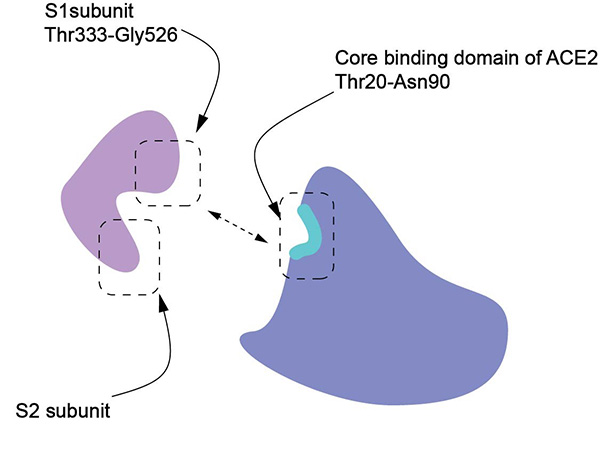 Figure. 2 Binding domain of S protein and ACE2. The Thr333-Gly526 of S1 subunit is responsible for binding to ACE2.

We replaced the original PmrB ’s Fe (III) sensitive domains Trp34 to Glu64 with the core binding domain of ACE2 protein in order to receive stimulation from the S protein of SARS-CoV-2. Upon sensing S protein of SARS-CoV-2, the sensor kinase PmrB autophosphorylates a highly conserved histidine residue and subsequently transfers the phosphoryl group to a conserved aspartate residue in its cognate response regulator PmrA. Then the phosphorylated PmrA protein binds to the promoter PmrC sequence to active the expression of the reporter gene. In order to verify the detection function of our engineered bacteria, we designed a bacteria co-culture experiment. We constructed three groups of bacteria: engineered bacteria with detection function, prey bacteria expressing S protein and empty vectors. These cells were cultured at 37 ℃ overnight, and then diluted to OD600 = 0.2 with volume of 5ml.Then cultivated at 37℃ for 1h to make their OD600 reach 0.4~0.6. We designed one test group and two different control groups:  I Detection bacteria + Prey bacteria  II Detection bacteria + Empty Vector  III Empty Vector + Empty Vector The volume of each group was 10ml (mix in 1:1). After 2h 0.5mmol/L IPTG induction, the prey bacteria expressed S protein into the medium, where the detection engineered bacteria also constructed its recombinant PmrCAB system. Once the detection engineered bacteria capture the S protein, the recombinant PmrCAB system will be activated to express the enhanced green fluorescent protein. We observed the three groups of bacteria with fluorescence microscope after the induction. Strong green fluorescent can be obviously notice at the group of detection bacteria and prey bacteria. And other two groups have less or no fluorescent signal (Fig. 3).

Fig. 3 Fluorescence microscopy photos of detection bacteria. EV, bacteria with empty vector. The S protein is the Thr333-Gly526 of S protein of SARS-CoV-2, which were expressed by E. coli BL21.

We replaced sensitive domains Trp34 to Glu64 of the original PmrB with the core binding domain of DPP4 protein Gly260 to Asp330 to be stimulated by the S protein of MERS-CoV. After detecting the S protein of MERS-CoV, the sensor kinase PmrB autophosphorylates the highly conserved histidine residue, and then transfers the phosphate group to the conserved aspartate residue in its homologous reaction regulator PmrA. Then phosphorylated PmrA protein combined with promoter PmrC sequence to activate the expression of reporter gene.

In order to improve the sensitivity of detection, we have improved the above parts and added a quorum sensing system (Fig. 1).

In the AHL mediated quorum sensing system composed of LuxI / LuxR, LuxI homologous gene in bacteria is responsible for the synthesis of QS signal molecule AHL, and LuxR homologue is activated as the receptor of this signal molecule to regulate the transcription of downstream genes. In this design, when the engineering bacteria recognize the virus S protein, PmrC starts the expression of the downstream gene LuxI, AHL began to synthesize continuously. When the concentration of AHL reached the threshold, it combined with LuxR protein to form LuxR-AHL complex and activated the corresponding promoter Plux_ HS,then activated the expression of reporter gene EGFP. 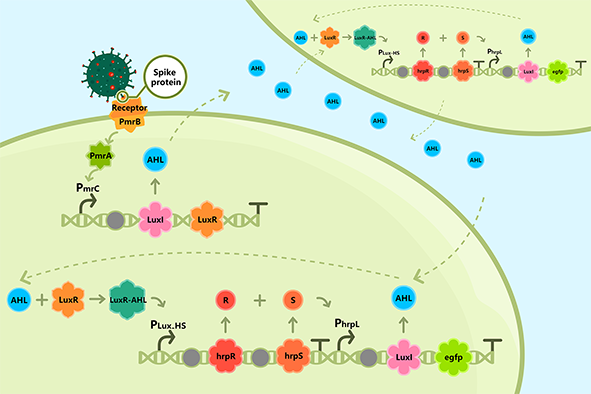 In order to add the quorum sensing system to the detection system, we set up the following gene circuit and double transferred the two plasmids into E. coli BL21 (DE3)(Fig.2).

Fig.2 The two plasmids were constructed with pETDuet-1 and pACYCDuet-1 as the vectors, and were co-transformed to E.coli BL21(DE3) to verify the quorum sensing system

Overnight shaking bacteria carrying two plasmids from the medium plate containing two kinds of resistance, diluted the bacterial solution to OD = 2, and the final volume was 5ml. Then, when the bacterial solution grows to OD = 0.4 ~ 0.6, IPTG is added to induce the expression of PmrB and PmrA, and S protein is added. After PmrB feels the stimulation of S protein, PmrC is activated through a series of reactions to start the expression of LuxI and LuxR downstream. LuxI begins to continuously synthesize AHL signal molecules and enter the outside of the cell. After reaching a certain threshold, it can enter other engineering bacteria, Combined with endogenous LuxR to form a complex, activate the corresponding promoter Plux_HS and further express the downstream reporter gene EGFP.

We set up different experimental groups, and the results are as follows(Fig.3). 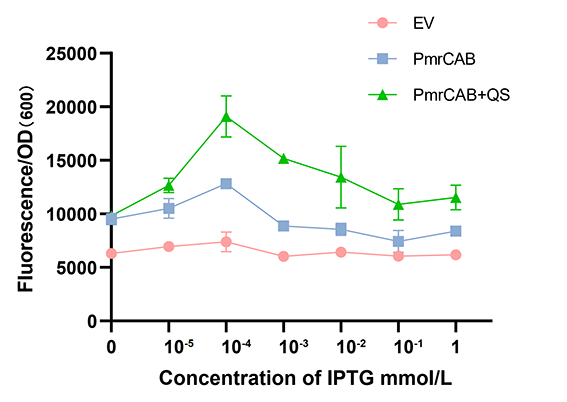 By joining the quorum sensing system. When a few engineering bacteria detect the virus, the information can be transmitted to other engineering bacteria through the mediation of signal molecule AHL, and finally the population expresses the reporter gene EGFP, which makes the detection results significant.