down 500 bp DNA of E.coli genome in deleting argR gene

When knocking out gene by using CRISPR-cas9 in E.coli, there should be a series of DNA that leads the genome repairing after cutting, so that the E.coli could live after knocking out a gene.

This sequence of DNA is used to help cas9 protein to cut the specific position on the DNA. It is constructed by connecting pUC, Ampr, RBS J23119, pTarget-upArm-gRNA-downarm. It is induced by the arabinose. 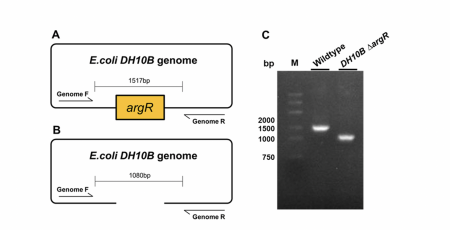