The ammonia that enters into E.coli is converted to glutamate along with α-Ketoglutarate . The series of reactions that convert glutamate into arginine are catalyzed by N-acetyl glutamate synthetase (NAGS), encoded by gene argA, to acetylize glutamate

This part can be used as a coding sequence after the promoter pTac and RBS B0034. The argA protein can be translated under the induction of IPTG. We constructed plasmids pBR322-KanR-pTac-argA and pBR322-KanR-pTac-argA using argA and argAfbr, respectively. The constructed plasmid was transformed into E.coli DH10b-ΔargR host cell to test its ammonia degradation efficiency. 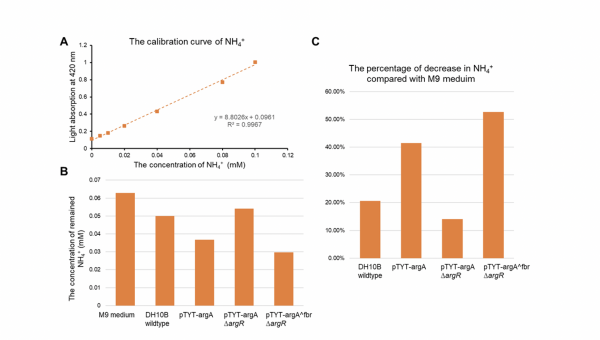 Detection results of the effect of the ammonia pathway. (A) The least-squared regression line of NH4+. (B)The concentration of NH4+. (C) The percentage of decrease in NH4+ compared with M9 medium.