This biological part is the CDS sequence of Damage suppressor (Dsup), which was found in tardigrade (water bear) Ramazzottius varieornatus in 2016 [1]. It can bind DNA and protect it against radiation. 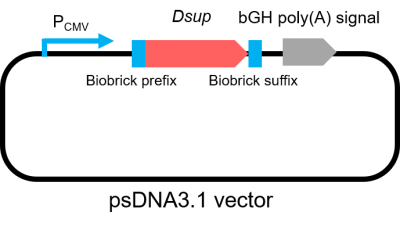 This part is the CDS of Dsup. We obtained the sequence from the research paper in 2016 [1]. Then with the help of a company, we optimized the sequence, so that the part is suitable to work in Human HeLa cells and there is no biobrick restriction enzyme cutting site in it. In addition, we added biobrick prefix and suffix at the 5’ and 3’ end of the part. We used pcDNA3.1, which is a widely used vector for human cells (Fig.1). Though Dsup has been studied by iGEM Team SIAT-SCIE 2017, no teams optimized the sequence and studied it in human cells. Thus, this is the first part of Dsup for human cells in biobrick library (http://parts.igem.org/).

This year, we focused on the stress resistance of water bear. Dsup is a protein resisting radiation. It can bind DNA and protect DNA from DNA damage resulting from radiation. We tried to use it to enhance the survival rate of human cells after radiation. For experimental condition and safety limitation, we used Human Hela cells instead of human cells at physiological status; we used UV but not X-ray or other radiation sources to stimulate the cells. However, all radiations induce DNA strain break and cause cell death, so we thought UV is representative.

【1】Cell culture
Human HeLa cells were cultured in complete DMEM (CD) medium (89% High-glucose DMEM, 10% fetal bovine serum (FBS) and 1% Penicillin / streptomycin). Generally, the medium was changed every day. Tyrisin was used for passage. Usually, 1 × 105 cells were seeded in every well of 6-well plate.
【2】Transient transfection
Plasmid was extracted by TIANprep Mini Plasmid Kit (TIANGEN, DP103-02). 1 × 105 HeLa cells were seeded in a well of 24-well plate. 24 h later, transient transfection was performed by following the manual of Lipofectamine™ 3000 Transfection Reagent (Invitrogen, L3000001). The total amount of plasmids in different wells were kept the same by adding pcDNA3.1-eGFP as the no-treatment control group and added pcDNA3.1-Dsup as the experimental group.
【3】Ultraviolet irradiation
After transfection of Dsup for 48 hours, take photos to record the cell cellular state or fluorescence intensity. At the same time, irradiate the cells with ultraviolet light for 15 s. Then placed them back to the CO2 incubator. Culture the cells for another 48 h. Then fix the cells by 4% PFA for 30 min.
【4】Cell Count
Observe the survival rate by using crystal violet staining methods and Image J software to calculate the intergrated density. 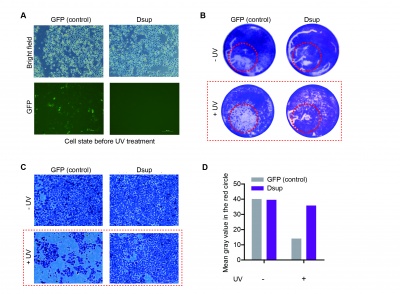 We used a pcDNA3.1-GFP plasmid as control. The cells with pcDNA3.1-GFP showed fluorescence 48 h after transfection, which indicated the successful expression of target proteins (Fig. 2A). Because we do not have professional equipment, we used the UV light of our biosafety cabinet and controlled the constant distance between cell plates and UV light to do the test. As a result, because UV was not vertical incidence, only the cells in the red circle of Fig. 2B could be irradiated. We can see that 48 h after irradiation, the cells in the red circle of the control group almost died (Fig. 2B and 2C), while Dsup group held a better survival rate (Fig. 2D).