Application and characterisation of BBa_K325909

Glasgow team, 2015
Re-characterisation
We have re-sequenced the biobrick K325909 and identified 6 mismatches between the luxCDABEG DNA sequences in the iGEM registry page and on the distribution plate. Therefore, we update the sequence of K325909 and report changes in 6 nucleotide locations as follows:

RBS optimisation In order to optimise bioluminescence in E. coli we have rearranged lux operon and placed each gene under the B0032 ribosome binding site. To take the step further, we have designed RBS library (BBa_K1725301 - BBa_K1725332) for each lux gene and assembled different libraries together to generate new optimised lux operon.
We successfully incorporated 32 different BioBrick RBS variants upstream of each of the lux genes by PCR, and then combined the different libraries together by BioBrick assembly. Firstly, we have created RBS libraries for luxABG and luxCDE assemblies and tested them separately for the translation initiation efficiency. We then generated strain with luxABGCDE (BBa_K1725352) in one plasmid consisting of luxABG (BBa_K1725350) and luxCDE (BBa_K1725351) constructs that gave colonies the highest intensity of bioluminescence. When compared to BBa_K325909, our strain co-transformed with BBa_K1725350 and BBa_K1725351 was brighter than Cambridge team‘s strain. For more details see our RBS library page. In biological imaging the output of light at multiple wavelengths can be advantageous to provide alternate options for measurement. Therefore we aimed to design a biobrick that would cause a wavelength-shift in the light output from the LUXoperon. <p>We took the LUXoperon supplied with the 2016 Part distribution, K325909 K325909 and used HiFi assembly to introduce the RFP variant mKeima to the 3’ end of the LUXoperon.

We have submitted this sequenced biobrick BBa_K2060002 to the registry. More details of our characterization of BBa_K2060002 can be found on our Wiki.

We had limited success in characterization of this biobrick. Even though the part sequence is correct and we were able to show a blue light output, we did not demonstrate the hoped for red light output. 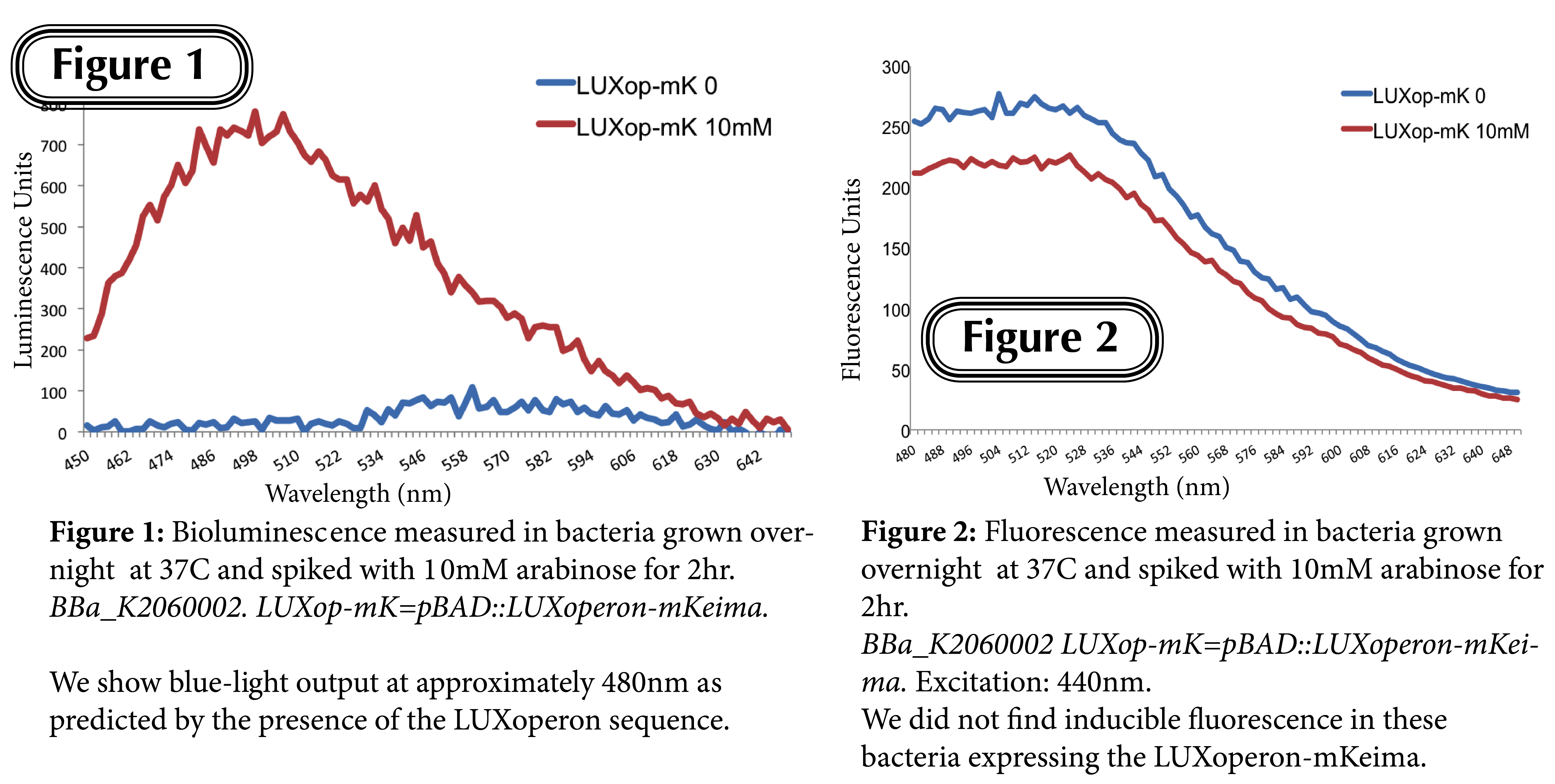 However we do not rule out the usage of this biobrick in the future. Our evidence shows that LUXoperon is robustly expressed but that maintenance of mKeima expression is non-trivial. We also found this with our attempts to express mKeima as an individual protein in the biobrick BBa_K1135001. <p>Therefore an exciting challenge for future iGEM teams will be to trouble shoot the expression of the entire LUXoperon-mKeima biobrick. The potential red light output will be a valuable tool in the use of bioluminescent bacteria in synthetic biology.

Team NTNU Trondheim 2017
Characterisation
We have improved the characterisation of the biobrick BBa_K325909 by using the lux operon as a reporter for our arabinose-inducible system. By looking at the previous characterisation results of BBa_K325909, we thought it would work reasonably with DH5α™ competent E. coli cells and 37 °C incubation temperature. No observable luminescence was detected with 0.01 M arabinose inducer concentration at any time after induction, so we decided to characterise the biobrick by measuring the luminescence from the lux operon at different arabinose concentrations and temperatures. We did this for four different temperatures (24.0 °C, 28.8 °C, 29.3 °C and 33.4 °C) and six different arabinose concentrations using a Tecan M200 plate reader. As the machine could only perform heating and not cooling, it was challenging to measure at temperatures below 29 °C. As no luminescence was detected at 37 °C, these graphs are not included. Results are shown below: 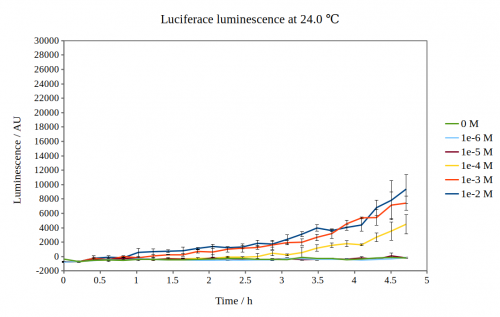 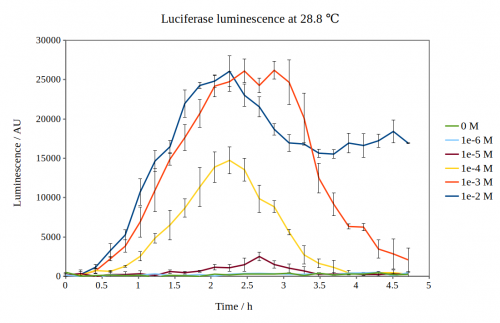 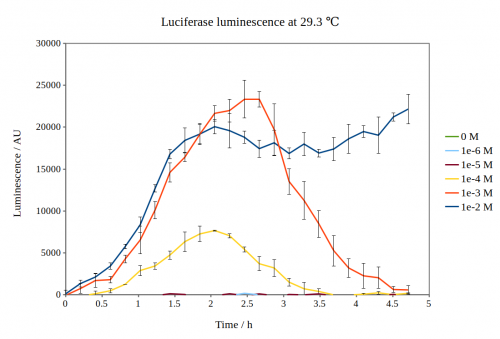 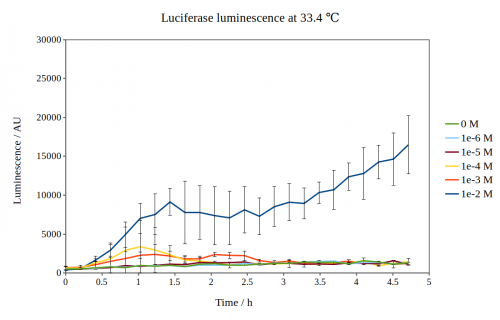 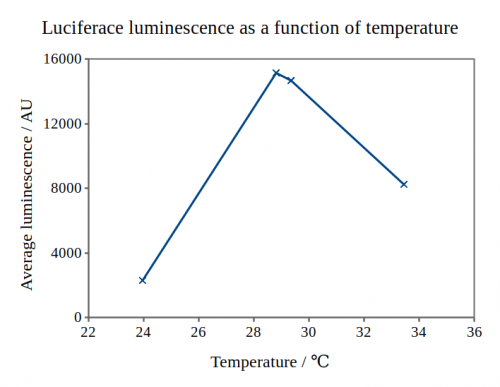 Taken together, these results show that MG1655, which has never been used to characterize BBa_K325909 activity previously, demonstrates enhanced and prolonged luminescence production compared to the commonly used strain - 10-beta; and this is likely due to a higher maximum growth in the former strain.