We have improved the pTET promoter's function and inducibility for use in E. coli employing a synthetic promoter library on pTet Part:BBa_R0040. The SPL was constructed using a PCR with randomized primers to yield arbitrary sequences in the promoter region. A total of 245 clones were screened to find a target with enhanced functionality. For the screening the cells were induced with 250 ng/mL anhydrotetracycline. The expression of mCherry was quantified based on the emitted fluorescence levels 8 hours after induction. The screening of the final 6 interesting variations revealed clone 6 as the sequence with increased inducibility (figure 1). The best version of the promoter was determined based on fold change in the fluorescence intensity and low basal level. We calculated a fold change of 34 comparing fluorescence in the induced and uninduced state! Additionally, this promoter also exhibited a low basal level of fluorescence that is comparable to background fluorescence of E. coli without any reporter (figure 2). This optimized promoter with mCherry as reporter can be found in Part:BBa_K3171175. 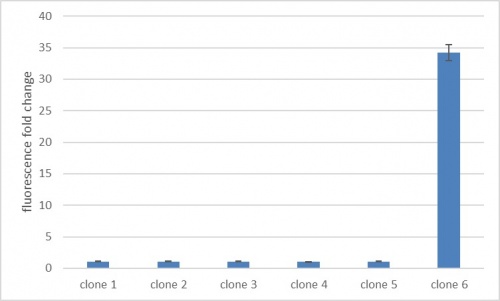 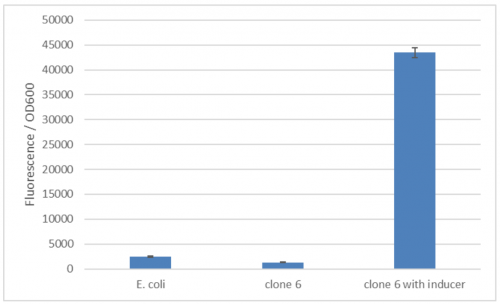 Figure 2: The basal level of reporter expression is comparable to E. coli without the construct. Clone 6 from the synthetic promoter library was induced with 250 ng/ml anhydrotetracycline. The used fluorescence reporter is mCherry.