This parts entry represents a promoterless acetone-production pathway for plasmid-borne expression in C. sporogenes. The entry comprises the thiolase gene thl BBa_K2992008 and acetoacetate decarboxylase adc gene BBa_M36585 coupled with the two units of the ctfAB complex BBa_M36581 and BBa_M36582 which are all derived from C. acetobutylicum. Transcriptional termination for this synthetic acetone-production operon occurs through the activity of Tfdx from C. pasteurianum BBa_K2284012. In our project we used genome-scale modelling to predict the necessary genes required to produce acetone in our chosen surrogate strain C. sporogenes. We sought to link acetone production with C. botulinum neurotoxin production by the integration of the neurotoxin transcriptional regulator botR onto the chromosome of C. sporogenes and by using promoter regions from the regulon of botR to control the acetone-production operons. In doing so, we hoped to generate our surrogate host strain as a model for predicting neurotoxin production in foodstuffs following food manufacturing processes. 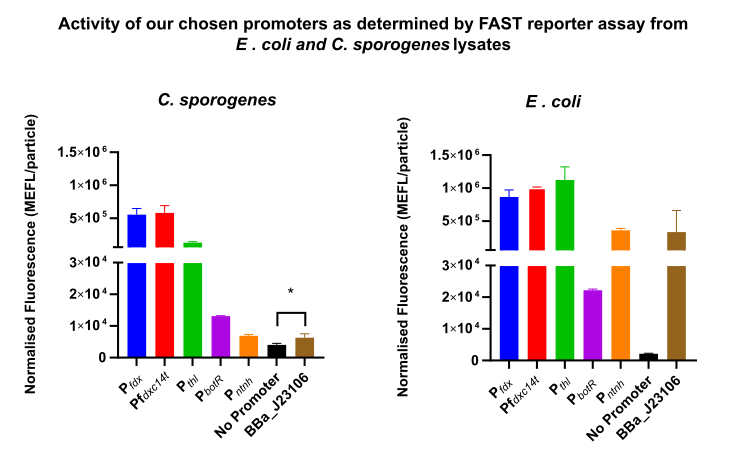 In the C. sporogenes experiments, adequate expression was detected for each of the clostridial promoters chosen for study. The two Pfdx derivatives generated the greatest level of reporter activity whilst the two C. botulinum promoters generated much lower levels of activity. Reporter activity appeared to be generally higher when analysed from the E. coli lysates as opposed to the C. sporogenes lysates. In those experiments, activity from the PbotR and Pntnh constructs were considerably greater than the no promoter control.

Having established the functionality of our chosen promoters. We next assessed the feasibility of using these to drive acetone production in our reporter strains. In our design approach, we rationalized that either C. botulinum BBa_K2992003 BBa_K2992007 BBa_K2992005 or C. acetobutylicum-derived ctfAB [BBa_M36581. BBa_M36582, encoding the A and B subunits of the butyrate-acetoacetate CoA-transferase complex, should permit acetone production. To test this, we transformed pMTL82151 plasmids encoding our acetone pathways using C. botulinum ctfAB BBa_K2992029 or C. acetobutylicum ctfAB BBa_K2992036, both under the control of PntnH, into our PbotR-botR reporter strain of C. sporogenes. 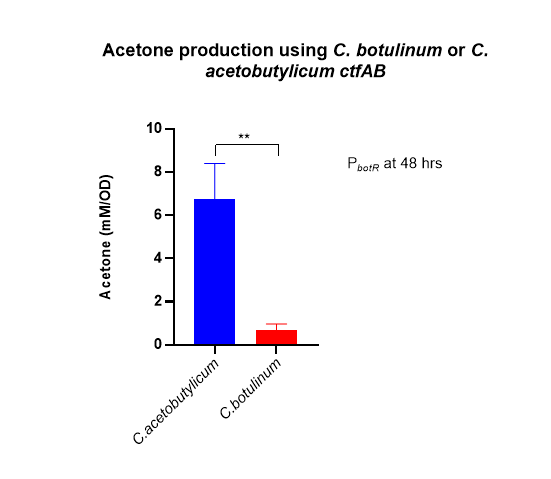 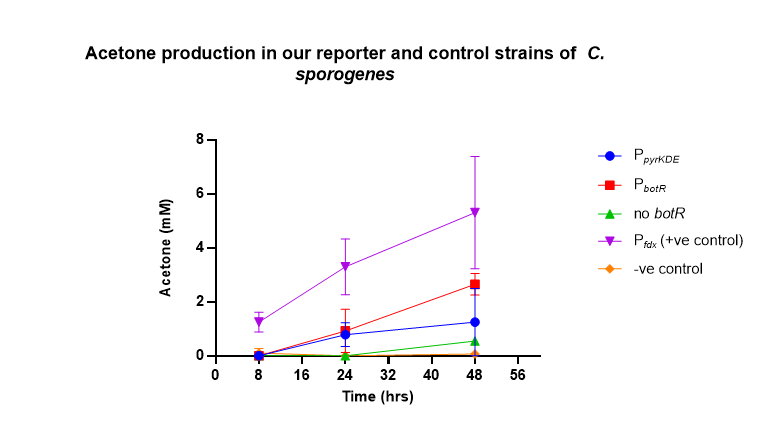