Not Released
Sample Not in stock
Experience: None
4 Uses
Get This Part

This part is a version of the Yarrowia lipolytica pTef1 promoter that we'll refer to as pTef1c.

It is an improvement of BBa_K2117000 as it has a mutated BsaI site (GGTCTC to GGTCTg) which makes this part compatible with the iGEM Type IIS RFC[1000] standard.

The results presented bellow show that this mutation does not at all affect its activity when compared to BBa_K2117000.

In the context of iGEM 2019 competition, we developed a metabolic engineering projet for the production of medically-relevant Conjugated Linolenic Acids (CLnAs) and used as a chassis the oleaginous yeast Yarrowia lipolytica, an organism whose metabolism is naturally poised for lipid production. For the expression of our enzymes, we choose the pTef1 promoter, a constitutive promoter native for Y. lipolytica. It is a strong promoter that controls the expression of the translation elongation factor-1 alpha [1], a protein that is one of the most expressed in most cells (between 3-10% of the soluble proteins [2]).

Our bibliographic research led us to designing and characterisation of several versions of the pTef1 promoter (Figure 1 and Table 1).

We started our research from iGEM’s part registry and we quickly found in the database the pTef1 promoter (BBa_K2117000), that we’ll refer to as pTef1a.

This promoter has been used to drive the expression of hrGFP (BBa_K2117001) in the composite part BBa_K2117005 which was built by standard 3A assembly which leaves TACTAG (BBa_G0000) as a scar between the promoter and the ATG of the downstream gene. We will refer to BBa_K2117000+scar as pTef1b.

pTef1 (BBa_K2117000) seemed suitable for our project, but had a major disadvantage: the presence of a BsaI site that makes it incompatible with the Type IIS RFC[1000]-compatible Loop assembly system that we designed for Y. lipolytica. To circumvent this incompatibility with the RFC[10] standard, we mutated the BsaI site (GGTCTC) to GGTCTg and thus created a new compatible part,BBa_K2983050, that we’ll refer to as pTef1c.

A quick sequence analysis of BBa_K2117000 revealed several differences compared to wild-type pTef1 promoter (nucleotides 1227374 to 1226969) of Y. lipolytica W29 chromosome C (GenBank Acc. n° CP028450.1). Three of the four mutations were introduced by the iGEM16_DTU-Denmark in order to remove two illegal restriction sites for BioBrick RFC[10]-compatibility (SpeI, PstI). As these sites are accepted in the Type IIS RFC[1000] standard, we created a closer to wild-type version of pTef1 promoter, BBa_K2983051, that has also a mutated BsaI site (GGTCTC to GGTCTg) which makes this part compatible with the iGEM Type IIS RFC[1000] standard. We will refer to BBa_K2983051 as pTef1d.

Continuing our research, we discovered another version of the pTef1 promoter, which is shorter and Type IIS RFC[1000] compatible [3,4]: BBa_K2983052, that we’ll refer to as pTef1e.

Unpublished observations of our PI, Jean-Marc Nicaud, suggest that the presence of a 4 nucleotide sequence CACA just upstream the ATG of the gene may lead to increased gene expression. Thus, we added BBa_K2983053 to the list of pTef1 variants to test. We will refer to BBa_K2983053 as pTef1f.

A sequence comparison of all pTef1 variants is presented in figure 1. 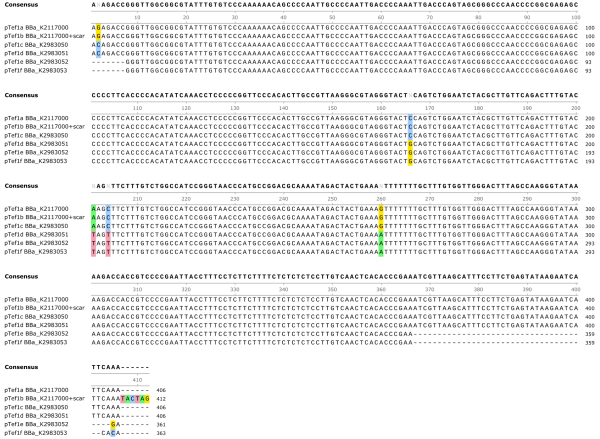 Figure 1. Sequence comparisons of the six pTef1 promoter variants. The alignment was generated using the MUSCLE algorithm implemented in SnapGene.

For this, we decided to use RedStar2 (BBa_K2983060), as it is the “brightest and most yeast-optimized version of the red fluorescent protein” [5].

To be able to make comparisons with the expression driven by the pTef1 variant already in the registry (pTef1a, BBa_K2117000), the BBa_K2983175 was subject to site directed mutagenesis to restore the BsaI site and thus generate BBa_K2983174.

All these parts are summarized in Table 1.

For pTef1 promoter characterization we decided to use the auxotrophic wild-type Y. lipolytica strain JMY195 [6], but also JMY2033 [7]. JMY195 is a Po1d strain, thus, by the means of the Zeta sequences [8], the Y. lipolytica genome integration cassettes (table 1) will be inserted randomly. JMY2033 is a derivative of JMY195 that contains a zeta docking platform at the ura3-302 locus. In this strain, the insertion is not random, but site specific which limits the risks of multiple insertion of plasmidic constructions in the genome.

For fluorescence measurements, yeast cells were first grown overnight in rich YPD medium then diluted by 100x in YNB-glucose medium (containing 1.7 g/L yeast nitrogen base with amino acids and ammonium sulfate, 1.5 g/L NH4Cl, 50 mM KH2PO4-Na2HPO4 buffer pH 6.8, 10 g/L glucose and 0.1 g/L leucine) in an opaque wall 96-well polystyrene microplate, the COSTAR 96 (Corning). The plate was incubated at 28°C at 200 rpm and the fluorescence (λexcitation 558 nm and λemission 586 nm) and OD600nm were measured every 15 min during 300 cycles in a SynergyMx (BioTek) plate reader.

To compare the expression between each promoter, we rely on specific fluorescence [9]. We measure the turbidity of the culture at 600 nm and the fluorescence of RedStar2, and determine the mean rate of fluorescence/OD600nm (SFU/h) increase during the exponential growth phase. This method allows quantifying RedStar2 expression in a manner independent of the length of the lag phase.

Using the calibration curves presented in Figures 2 and 3 (and as an excel file too), we converted the arbitrary units into Molecules of Equivalent Resorufin (MEResorufin) / particle (Figure 6).

Also, using the calibration curves presented in Figures 2 and 4 (and as an excel file too), we converted the arbitrary units into Molecules of Equivalent Rhodamine B (MERhB) / particle (Figure 7).

The results of the different pTef1 promoter strength quantifications are presented in Figures 5, 6 and 7 using different units of measure.

For nearly each construct, we obtained and analysed twice at least 3 clones (and up to 32), the majority of each displaying comparable specific fluorescence values similar to the value obtained for the positive control. However, a minority of clones were constantly displaying twice more SFU/h suggesting they have integrated 2 copies of the RedStar2 expression cassette. Indeed, the difficulty in using insertion of plasmid construction in the genomic approaches is to estimate and control the insertion site and the number of copies inserted into the genome. In the auxotrophic wild-type Y. lipolytica strain JMY195, our RedStar2 expression cassettes integrate randomly and the protein expression may vary depending on the insertion site. In the JMY2033 strain, the insertion occurs mainly at the zeta docking platform at the ura3-302 locus.

As can be easily observed from the results presented in Figures 5, 6 and 7, the different modifications of the pTef1 promoter sequence highlighted in Figure 1 do not have a drastic impact on its activity. The specific fluorescence values are similar between the different variants of pTef1 in both Y. lipolytica strains and independent of copy number / genome. To confirm these observations, we performed a two-tailed student test with an error threshold of 5% in order to compare the specific fluorescence averages in each strain and each construct. No statistically significant difference was observed between the different constructs in both strains and at both copy number / genome.

Similar observations were obtained when using hrGFP as a reporter instead of RedStar2. These results are presented in detail on the BBa_K2117001 and BBa_K2117005 parts’ Main Pages on the iGEM Registry.

Figure 5. In vivo characterisation of RedStar2 expression driven by different pTef1 promoter variants in two Y. lipolytica strains. The data and error bars are the mean and standard deviation of at least 6 measurements (at least three biological replicates each measured as two technical duplicates)

Figure 6. In vivo characterisation of RedStar2 expression driven by different pTef1 promoter variants in two Y. lipolytica strains. Data are presented as Molecules of Equivalent Resorufin (MEResorufin) / particle. The data and error bars are the mean and standard deviation of at least 6 measurements (at least three biological replicates each measured as two technical duplicates)

Figure 7. In vivo characterisation of RedStar2 expression driven by different pTef1 promoter variants in two Y. lipolytica strains. Data are presented as Molecules of Equivalent Rhodamine B (MERhB) / particle. The data and error bars are the mean and standard deviation of at least 6 measurements (at least three biological replicates each measured as two technical duplicates)