This part contains a promoter BBa_J23119, the RBS* BBa_K2924009 the coding region for the acyl-[acyl-carrier-protein] thioesterase of Marvinbryantia formatexigens BBa_K2924004 and a double terminator BBa_B0015.

Fatty acids are long aliphatic chained carboxylic acids, which can be saturated or unsaturated. They have mostly an even number of carbon atoms from 4 to 28. 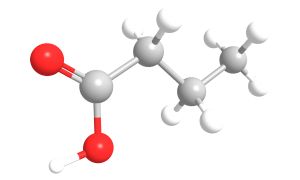 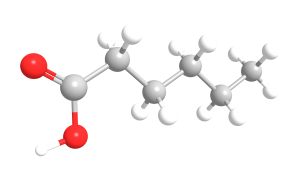 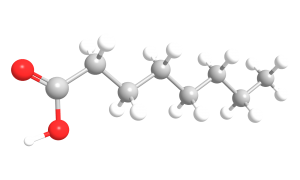 Butyric acid (Fig. 1) is a straight-chained saturated 4:0 fatty acid. It is an oily and colorless liquid and has a unpleasant, rancid odor 1. It has a molecular mass of 88.11 g/mol. Butyric acid is found in animal fat and plant oils 1, bovine milk, butter, cheese, and human breast milk 2.

Hexanoic acid (Fig. 2) is a straight-chained saturated 6:0 fatty acid, which is also called caproic acid. It appears as a white crystalline solid and has a unpleasant odor 3. It has a molecular mass of 116,16 g/mol. It is found naturally in animal fats and oils and various plants 3.

Octanoic acid (Fig. 3) is a saturated fatty acid with 8 carbon atoms, which is also called caprylic acid. It is a colorless4/light yellow liquid and has a mild to fruity-acid odor 5. It has a molecular mass of 144,21 g/mol.

Fatty acids are synthesized and elongated by fatty acid synthases, which is a complex containing multiple enzymes. The determination of its length is controlled by thioesterases, a subgroup of hydrolases. They hydrolyze acetyl-CoA esters or acyl carrier protein esters to the corresponding free fatty acid and the Coenzyme A or the acyl carrier protein.

The acyl-[acyl-carrier-protein] thioesterase of Marvinbryantia formatexigens has been tested to show catalytic activities in producing a high amount of 4:0, 6:0 8:0 6. M. formatexigens use cellulose and hemicellulose in vegetables 7, which is digested in the human colon by a microbial community including M. formatexigens, as source for production of short-chain fatty acids 7.

Use of butyric acid, hexanoic acid and octanoic acid

By engineering metabolic pathways to produce designer fatty acids with the correct amount of carbons in the chain, such fatty acids could be used directly for chemicals or fuels with less processing 8, 9 and less usage of fossil resources. Therefore, it is a step towards a environmental friendly alternative 10.

Butyric acid has a broad range of usage in chemical and fuel industries 9, 11. In manufacture, it is used as artificial flavoring ingredient for candies, certain liquors or syrups 1.

Hexanoic acid has several applications. It is related to tobacco products, to cleaning and washing material, to colorants and dyes, and is used as a general flavoring agent for food3.

Octanoic acid is added directly to human food affirmed as generally recognized as safe (GRAS) 12, 13. The substance is used as a flavoring agent and adjuvant and occurs normally in various foods, like baked goods, cheeses, fats and oils, frozen dairy desserts, gelatins and puddings, soft candy and snack foods. It is found in milk of various mammals and is a minor component of coconut oil and palm kernel oil 14. Therefore, it has a low toxicity ( oral LD50 for rat: 10.08 g/kg 12).

The part was cloned via Gibson Cloning into the pSHDY plasmid. The pSHDY plasmid is an RSF1010-based, low-copy self-replicating vector derived from pVZ321 and has a broad host range, which can ensure the conjugation from Escherichia coli to cyanobacteria and other microorganisms.

Because of potential toxicity of the thioesterase for the organism, which was shown by lethality, we had to use the inducible promoter Prha BBa_K914003 instead of the constitutive promoter . BBa_J23119

Unfortunately, it was not possible to test the Escherichia coli transformants or the Synechocystis conjugants with (GC-MS) due to the unavailability of a method for short-chain fatty acid detection. This experiments can be conducted as soon as a suitable method is created.