His-tagged laccase, mutated to increase the specificity for SMX

This BioBrick codes for a mutated version of a laccase from Trametes versicolor, namely 1GYC (PDB ID). It contains mutated residues at points 162, 332 and 337, from Phenylalanine to Leucine (residue 162) and Isoleucine (residue 332 and 337). The aim of the mutations was to increase the enzyme's specificity and activity for sulfamethoxazole. It has been codon optimized for Pichia pastoris.

This laccase is originally from the fungus Trametes versicolor. Laccases are a class of multi-copper oxidases that fungi use to degrade lignin and be able to grow on wood [1]. Lignin is composed of a cluster of multiple phenolic groups, which are oxidized by laccases. With their natural affinity for phenolic-like structures, laccases have also been shown to degrade a large range of other phenolic compounds. For example, many reports show that laccases can be used to degrade pharmaceuticals - including oestrogens, painkillers and antibiotics [2]. In our project, it has been used to inactivate the antibiotic sulfamethoxazole (SMX), one of the most persistent antibiotics found in the Baltic Sea [3]. This BioBrick is a mutated version of BBa_K2835003 (also created by iGEM Stockholm 2018) with the aim of increasing the enzyme's specificity and activity for SMX. This BioBrick was also codon optimized for Pichia pastoris, the chosen expression host in our project. It was cloned into the Invitrogen pPICZα A vector, which fuses it to the α-factor secretion signal from Saccharomyces cerevisiae, and puts it under control of the methanol-inducible AOX1 promoter.

No experimental data was retrieved for this laccase (no activity in ABTS activity assay), except for a colony PCR showing that the BioBrick was successfully integrated into the genome of Pichia pastoris (Figure 1). However, theoretical data calculated on the basis of quantum mechanical molecular modeling methods was obtained (for more detailed information on this, please see the Team Stockholm 2018 Model wiki page). How the substrate binds to this mutated laccase is shown in Figure 2. For a couple of different conformations, it was concluded that kcat was approximately constant, and so, it was calculated. The calculated kcat (with SMX as the substrate) was determined to 1297.2567 s-1. 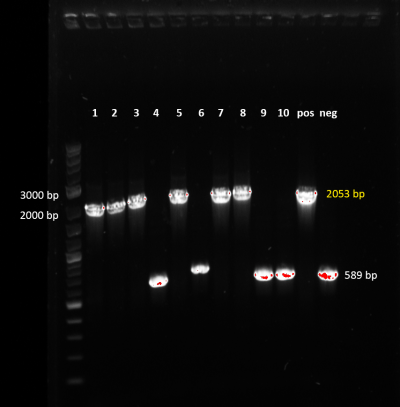 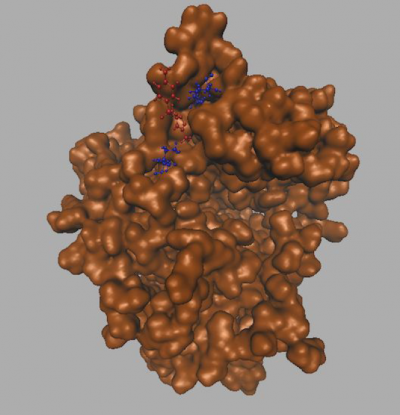 Figure 2. Graphical representation of the enzyme with the substrate, sulfamethoxazole bound (red). The blue residues are the mutated residues mentioned in the text above.

Trametes versicolor:
T. versicolor, which was previously known as Trametes Coriolaceae, is among the world’s top 25 medicinal macrofungal communities[1]. It is a white-rot fungus capable of degrading lignin in wood. Mycelial colonies of Trametes versicolor were of fade white color and form a high-density colony with a velvety texture, plenty of aerial hyphae and a high growth rate when grown on Malt extract agar and potato dextrose agar supplemented with oak sawdust substrate. 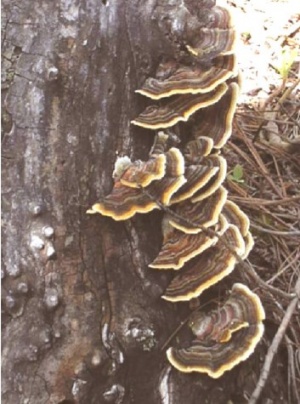 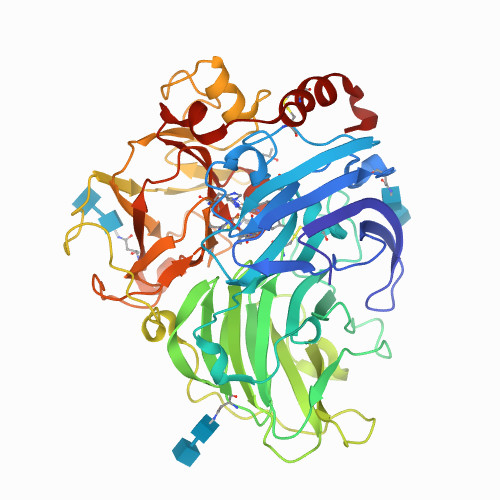 Laccases:
Laccases, in general, are copper oxidases found mainly in plants, insects and fungi but some bacteria also secrete this enzyme. It uses oxygen in its native state as co-substrate for the catalysis and yields water as the sole by-product after the whole reaction hence it is very popular, widely used for lignin degradation activity even though it has a significant lignin formation activity as well. It oxidizes various phenolic compounds by one electron oxidation method. Fungal laccases are involved in a wide range of natural phenomena like sporulation, pigment production, fruiting body formation, stress defense, plant pathogenesis, and lignin degradation[2]. Laccases, classified benzenediol oxygen reductases, are members of the cupredoxin superfamily and belong to a subfamily of multi-copper oxidases (MCOs). They have four copper atoms in remarkably special oxidation states: one type-1, one type-2, and two type-3s, all forming their catalytic site in the molecule which is shown in the figure below:

[[Image:|400px|thumb|center|Fig: 1GYC copper-binding residues that are matched with a defined pattern, shown as T1, T2 AND 2-T3.
Source: Sirim et al., Database: the journal of biological databases and curation. (2011)]]

We have also identified the various restriction enzyme sites present in the gene sequence of the given laccase as it was not available in the part plasmid vector. We used the NEB cutter tool to generate this labelled image.