We got the INP from BBa_K523013 constructed by iGEM11_Edinburgh. To test the surface display efficiency of INP, we added sfGFP to the downstream of INP, and expressed the fusion protein under the control of J23104 and B0032.

We conducted a cell lysis experiment to observe the distribution of fluorescent protein(figure 1). From this result we can see that after cell lysis followed by centrifuge, both the precipitation and supernatant shows relative strong fluorescence signal in intracellular expressing GFP cells(figure 1B, middle), while the signal was stronger in supernatant than in precipitation in GFP surface displayed cells(figure 1B, right). To further confirm this result, we removed the supernatant and observed that the signal in GFP surface displayed cells fragments was stronger than the GFP intracellular expressed ones(figure 1C).This suggests that the surface displayed GFP were anchored to the outer membrane and being precipitated with the cell fragment, while the intracellular expressed GFP were solved in the supernatant.

We observed the fluorescence under the super-resolution microscope. As figure 2 shows, The intracellular expression of GFP displayed the rode-shape of E.coli, while the signal of surface displayed GFP showed the dotted pattern, which suggested that the GFP were gathered and distributed at the surface of E.coli.. 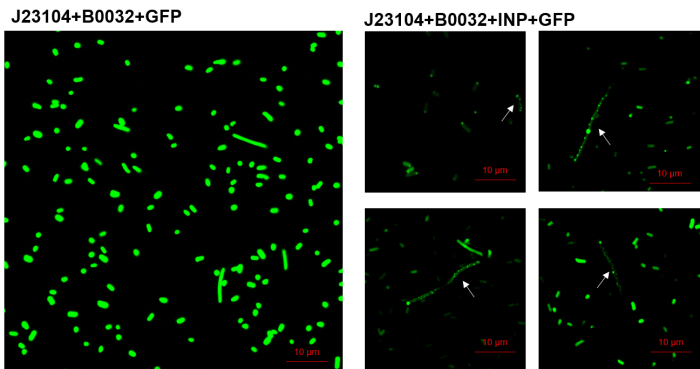