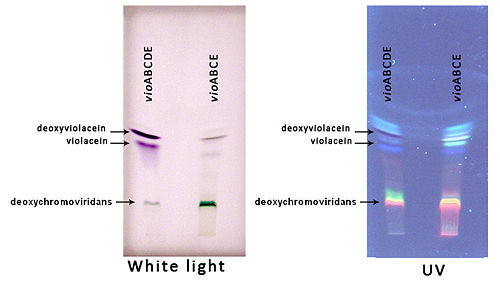 Judging by the violacein biosynthesis pathways scheme uploaded on the main page, the results imply that spontaneous transformations of intermediates in the violacein biosynthetic pathway occur frequently, therefore reducing the biosynthetic flow towards violacein and resulting in a lower yield of the latter. Since violacein is a potentially very applicable compound in terms of medicine and other applications (for instance natural purple dyes), it is interesting for industrial production that could be problematic because of the unwanted side products like deoxychromoviridans. That is why 2010 iGEM team Slovenia has decided to improve the violacein biosynthetic pathway. Therefore we designed new constructs derived from Part:BBa_K274002. We designed chimeric vio enzymes, fused with zinc finger proteins (Part:BBa_K323132 and Part:BBa_K323135). We showed higher yields of violacein production where biosynthetic enzymes are bound to zinc fingers and through them to DNA scaffold (called DNA program). DNA program was designed in such a way, that it arranges biosynthetic enzymes in a correct order, leading to close proximity which ensures higher yields of biosynthesis and decreases formation of side products. See our project on 2010 iGEM team Slovenia.

The 2012 UCSF iGEM Team team obtained a violacein standard from Sigma-Aldrich,Item:V9389-1MG . We used this standard to measure the absorbance of violacein at varying concentrations, obtaining the standard curve shown below. Full wavelength scans were obtained, but as shown by previous iGEM teams (Cambridge 2009 ) the maximum absorbance of violacein is seen at 575nm and is reported here.

The Johns Hopkins 2011 team has taken this part and retooled it for expression in S. cerevisiae. Each gene in the operon will be represented by a separate part for compatibility with eukaryotic expression. We have held off on submission to the Registry due to the presence of illegal sites that we plan to fix with quick-change PCR in the next two weeks.

Sequence analysis of this part reveals that there is a SpeI site where the XbaI site should be. In addition there is insufficient length between the BioBrick sites (i.e. this is not a standard prefix) to allow efficient cutting of both restriction endonucleases. -- Mike Speer

When designing our project, we were thinking about using the violacein pigment, K274002, in our genetic circuit. This part is supposed to be just the coding sequence. Because the tube in the picture on our website only this part with no promoter added, there should be no expression of violacein. However, as can be seen below, the violacein is present. This could be caused by either an undocumented promoter within the part, or a non-insulated BioBrick vector with inefficient flanking transcriptional terminators.