For the silver medal criteria “Validated Part” we submit a basic part: constitutive promoter pSAD from Chlamydomonas reinhardtii. It is a high constitutive expression promoter that encodes for a ferrodoxin-binding protein of photosystem I. This pSAD promoter was submitted in 2014 by the Concordia team (BBa_K1547005). To be compatible with the PhytoBrick standard (RFC1000), an illegal BpiI restriction site was removed (A289T) 1 . We cloned P pSAD by PCR amplification in A2-A3 fusion site to use it for our retrotransposon design. Acceptor plasmid is the MoClo Universal pL0 acceptor plasmid pAGM9121 2 . We sequenced again the sequence to be sure there is no unwanted mutations.

pSAD is a strong constitutive promotor in Chlamydomonas. It regulates a gene which encodes an abundant chloroplast protein located on the stromal side of the Photosystem I complex.

Our part is compatible with the PhytoBrick MoClo standard. This PhytoBrick was intented to be use as constitutive promoter for the transcription unit of paromomycine in the CARGO of our synthetic retrotransposons for directed evolution on the Chlamydomoas. It is part of our reporter system to characterize the activity and transposition rate.

We couldn’t directly use our Phytobrick for the characterisation because we didn’t have time to construct all the other that are needed for the final assembly. Instead we use a slightly different Phytobrick with the same P PSAD. sequence but with one different fusion site.


Figure 1 : Schematic representation of the Phytobrick BBa_K2703002 and its fusion site for the MoClo assembly. It complies with the Common Genetic Syntax fusion sites.


This part was assembled in a functional Transcription Unit with the resistance gene paromomycine that was as a reporter gene. After transformation in C.reinhardtii D66 the functionality of the promoter was tested by counting the number of chlamydomonas colony resistant to paromomycine (15 ug/ml). Different constructions were made to characterize and compare the functionality of P pSAD . We tested different combination of promoters and 3’UTR.


Figure 2: The 4 different devices made to test the functionality of the promoter PPSAD. The construction were made with the MoClo kit made for C.reinhardtii by P.Crozet et al 2018 1. 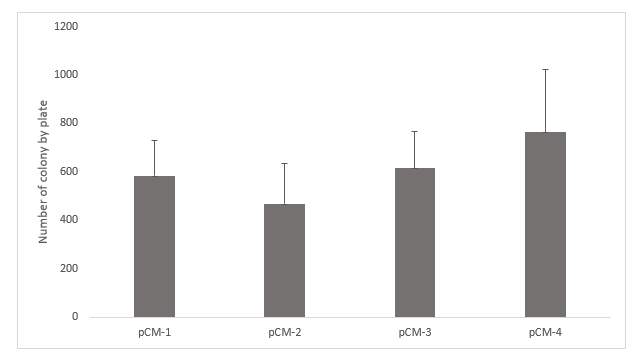 Figure 3: Graphic listing the 4 devices (PCM-1, pCM-2, pCM-3, pCM-4) transformed in C.reinhardtii D66 by electroporation with 100 g of DNA. The selection was made on TAP agar media with paromomycine (15 g/ml) by plate. Data are mean  SD (N=3)N=3 and there were no results with a negative control.
The promoter PPSAD has a slightly better activity than promoter PAR Moreover, the combination of promoter PPSAD and TPSAD seems to work better that with the terminator TRBCS2.