The part BBa_K2668070 corresponds to a genetic sequence encoding the mTag Blue Fluorescent Protein fused with an AviTag. IDT performed the DNA synthesis and delivered the part as gBlock. The construct was cloned by In-fusion into the pSB1C3 plasmid with the below primers and then transformed into E. coli Dh5-alpha strain. Figure 1 shows the restriction map of the resulting clones. We expected two bands at 700bp. All the clones show the expected restriction profiles. The clones 2 was deposited in the registry of Standard Biological Parts. 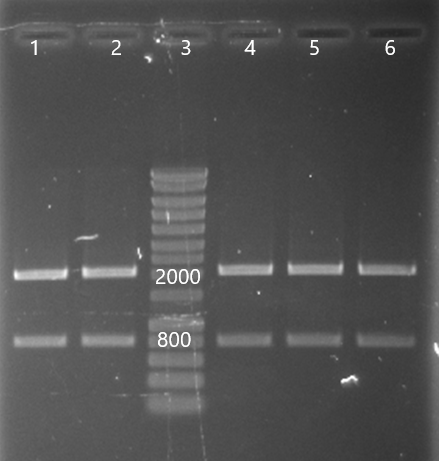 Figure 1: Analyses of pSB1C3_ mTagBFP and AviTag length and restriction map The plasmids of 5 obtained clones were analysed to check their length. XbaI/NcoI digested plasmids are electrophoresed through a 1% agarose gel. Lane 1 & 2 and 4 to 6 are the digested plasmids (clones 1 to 5) resulting from DNA extraction of the 5 clones. Lane 3 is the Smart DNA ladder (Eurogentec), the 0.6kb, 1.5 kb and 2.5kb DNA fragments are annotated.

The part BBa_K2668070 was used to assess the ability of a chimeric fusion between the cellulose binding domain CBM3a and a monomeric streptavidin head mSA2 (a construction we nicknamed Orthos ; see part BBa_K2668010) to functionalize cellulose with a compound biotinylated in vivo. Indeed, proteins containing the AviTag small peptide can be efficiently biotinylated in vivo by BirA. BirA is the E. coli biotin ligase that has high affinity toward AviTag. The part BBa_K2668070 was subcloned into the pETDuet-1 expression vector where BirA was previously cloned and transformed into E. coli strain BL21. Biotin was added in the culture medium (0.1 mM final concentration) during IPTG induction in order to produce biotinylated BFP. Next, 3.2 µM of Orthos were incubated with 32 µM of in vivo biotinylated BFP. For the control experiment, the same quantity of BFP was incubated without Orthos. These samples were finally incubated with cellulose. After several washes with resuspension buffer, fluorescence was measured in the cellulose pellets. As shown in Figure 2, fluorescence is two time higher in the sample containing Orthos than in the sample than in the control sample. 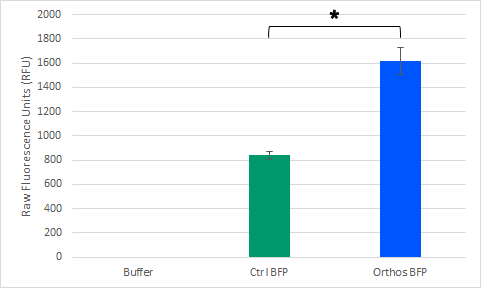 These results demonstrate that the mTagBFP blue fluorescent protein was well-tagged with biotine which validates the part. In addition, they show that Orthos binds to cellulose and thus provide a proof of principle that Orthos design allows functionalization of cellulose with a fluorophore through its streptavidin linker.