There are multiple families of cold-inducible proteins in prokaryotes, the most widely studied of which are the Csp family of cold shock proteins in E.coli. CspA represents CspA family, which has been quite extensively studied for the mechanism of its cold response. There is a temperature-sensing region in the 5’untranslated region (5'UTR) of CspA mRNA, which can regulate the accessibility of the translation initiation region by altering the advanced structure of RNA, thereby regulating the initiation of translation.

At low temperatures (<20℃), 5’UTR of CspA mRNA can form an advanced structure called pseudoknot, which is more efficiently translated because the conformation exposes the Shine–Dalgarno (SD) sequence, it is beneficial to recruit ribosomes and somewhat less susceptible to degradation. At normal temperatures, due to thermodynamic instability, pseudoknot unfolds. 5’UTR forms a secondary structure masking SD sequence to block translation initiation region, which impedes translation. We designed a series of cold-inducible RNA-based thermosensors with different melting temperatures, intensity and sensitivity based on the pseudoknot structure.

Our team designed synthetic cold-inducible RNA-based thermosensors that are considerably simpler than naturally occurring cspA thermosensors and can be exploited as convenient on/off switches of gene expression.

In our design, we deleted the conserved region called the cold box upstream of the 5'UTR of CspA mRNA, so that the expression of CspA is not regulated by its own negative feedback. The pseudoknot in the CspA mRNA contains four sets of base pairings, and its stability is temperature-regulated. Several structural parameters come into consideration to optimize cold-inducible RNA-based thermosensors: base pairing, base pair position and GC content in pseudoknot region. Increasing base pairing can raise the melting temperature of pseudoknot, thus enlarging the temperature range of open conformation. Increasing GC content can also raise the melting temperature of pseudoknot. We also change base pair at different position. What’s more, we delete the cold box which is at the upstream of CspA 5’UTR. In K2541305, we added two base pairs (U:G and C:G) in the pseudoknot region (figure 2).

The thermosensor sequence is constructed on the pSB1C3 vector by Golden Gate assembly. The measurement device is composed of Anderson promoter (BBa_J23100), thermosensor (BBa_K2541305), sfGFP_optimism (BBa_K2541400) and double terminator (BBa_B0010 and BBa_B0012). We select a constitutive Anderson promoter J23100 as an appropriate promoter by pre-experiment. The sfGFP_optimism has faster folding speed and higher fluorescence intensity. The double terminator can reduce leakage (Figure 3). We characterized RNA-based thermosensors in E.coli DH5a. 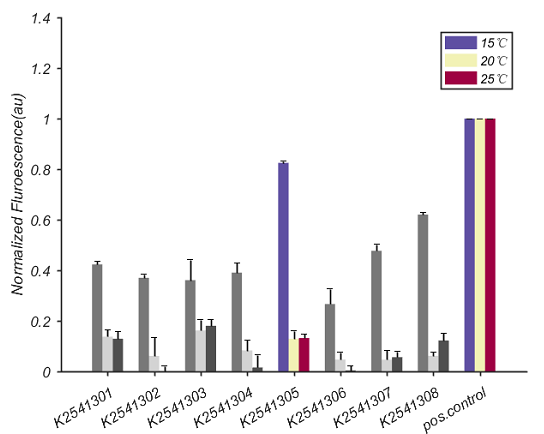 Figure 4. Characteristics of K2541305. Each set of three bars represents the activity level of a different thermosensor. The bar colors purple, yellow and red represent the temperatures 15, 20 and 25°C, respectively. The height of the bars corresponds to the normalized fluorescence. 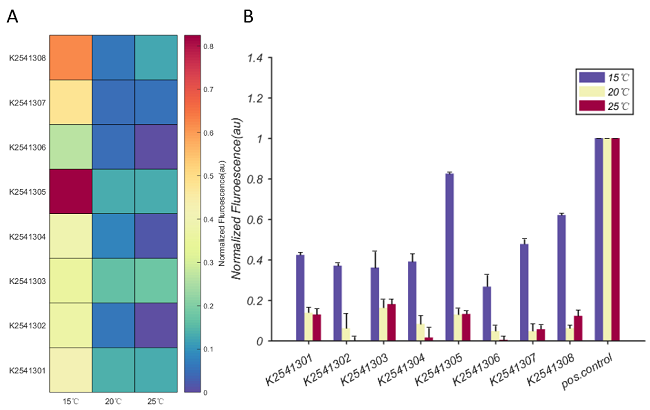 Our data show that efficient RNA-based thermosensors with different melting temperatures, intensity and sensitivity can be built from RNA advanced structure, thus providing useful SynRT toolkit for the regulation of gene expression.