• The mer operon, is a natural occurring cluster of genes that confers mercury resistance to bacterial cells.

• The mer operon is constituted by genes that encode for regulation (merR), mercury uptake (merP, merT, and/or merC), and mercury reduction (merA, and/or merB)

The mer operon is a set of genes that function in synchrony to convey mercury resistance to bacterial cells. For our purposes the operon can be used to bioremediate methylmercury by converting it to its less toxic ionic form, Hg(II), and then into volatile Hg(0). While variations in the operon exist, with not all genes being present in all organisms and some having extra genes, the operon we have focused on contains five genes: merR, merT, merP, merA and merB. (For more information on the each individual gene of the mer operon, see the following parts pages: BBa_K1420001 for merA, BBa_K1420002 for merB, BBa_K1420003 for merP, BBa_K1420004 for merR, and BBa_K1420005 for merT.)

merR, located upstream of the rest of the mer operon mercury resistance genes, serves to regulate the mer operon by activating transcription in the presence of Hg(II) and acting as a weak repressor in the absence of Hg(II).1 The effector binding region of MerR family proteins can vary allowing for great diversity in MerR-like promoters that can respond to a variety of heavy metals as well as antibiotics and oxidative stress.1 This variable nature of MerR family proteins makes them a valuable tool for various heavy metal detection and bioremediation. Once transcription is activated, the merT and merP genes encode for proteins that work collectively to transport Hg(II) species into the cell. merP encodes the periplasmic transport protein, MerP, which binds a single Hg(II) ion at two conserved cysteine residues that define its metal binding motif.2 The MerP cysteine residues take up a Hg(II) ion and remove any attached ligands before passing the ion to the MerT transmembrane protein.2 MerT then transports Hg(II) species from the periplasm through the membrane.3 Hg(II) is transferred from the periplasmic cysteine pair on the first transmembrane helix to the cytoplasmic loop cysteine, where it is finally transferred to a cysteine pair at the N-terminus of the protein.3 Once the Hg(II) species are in the cytoplasm MerA works to convert it to volatile Hg(0) via an NADPH dependent reaction.The merB gene is often found immediately downstream of merA and is essential for the detoxification of methylmercury which can enter the cell without a transporter. The MerB enzyme is a lyase that catalyzes the breaking of carbon-mercury bonds through protonolysis of toxic mercury compounds, such as methylmercury.4 This produces the less toxic and less mobile Hg(II) which is then completely volatilized to Hg(0) by MerA. 1

The degradation of both organic and inorganic mercury is facilitated by genes coded by the mer operon. The mer system acts to reduce reactive inorganic and organic mercuric forms to the less toxic, inert elemental Hg(0) by interacting with reactive species at cysteine residues located within Mer proteins. Through interaction with Mer protein cysteines, the mer operon successfully carries out metalloregulation and reduction. Mercuric reductase, MerA, reduces Hg(II) using NADPH as a reductant, thus the operon must be contained within a metabolically active cell. Figure 1 illustrates the mechanistic nature of the mer operon. 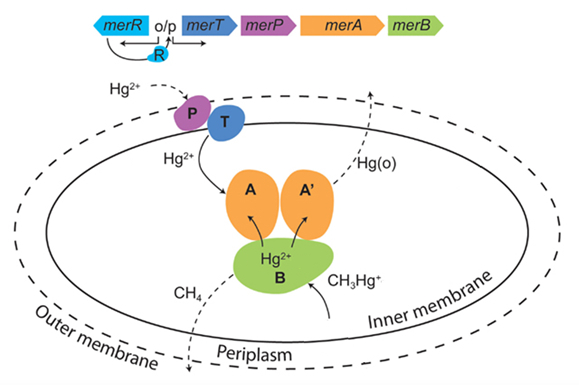 Figure 1 Diagram depicting the mechanism of proteins coded for by mer operon. This reduction is NADPH dependent and requires metabolically active cells. The activity of the proteins encoded by the mer genes depicted acts to reduce inorganic and organic mercurial species.

Expression Modifications of the mer Operon

The construct used for our iGEM project was assembled from the mer operon in Serratia marscecens in the plasmid pDU1358, which was designed to contain an upstream regulatory protein MerR, two mercuric transport proteins MerP (periplasmic) and MerT (transmembrane), a mercuric reductase MerA, and finally an organomercurial lyase MerB. A diagram of how the construct was inserted into a BioBrick compatible vector, pBBRBB, is shown in Figure 2. This system is regulated by a bidirectional promoter so that MerR on one side of the operon is constitutively expressed and allows for the repression of the mer operon in the absence of mercury ions, and the downstream activation and transcription of merT, P, A, and B when mercury ions are in close proximity. MerT and MerP were selected as transporters for their high turnover rates of bringing in mercury ions, which are subsequently bound by MerA to catalyze their conversion into volatile mercury. The organic and more toxic form, methylmercury, can diffuse into the cytosol of the bacteria where MerB catalyzes its conversion into mercury ions, which are then bound to MerA and converted into less toxic, volatile elemental mercury in an NADPH dependent reaction. The system is very tightly regulated and allows for continuous turnover within our bacterial chassis as the mercury ions are reduced and volatilized and then captured externally rather than sequestered within our bacteria which would eventually lead to cell death. 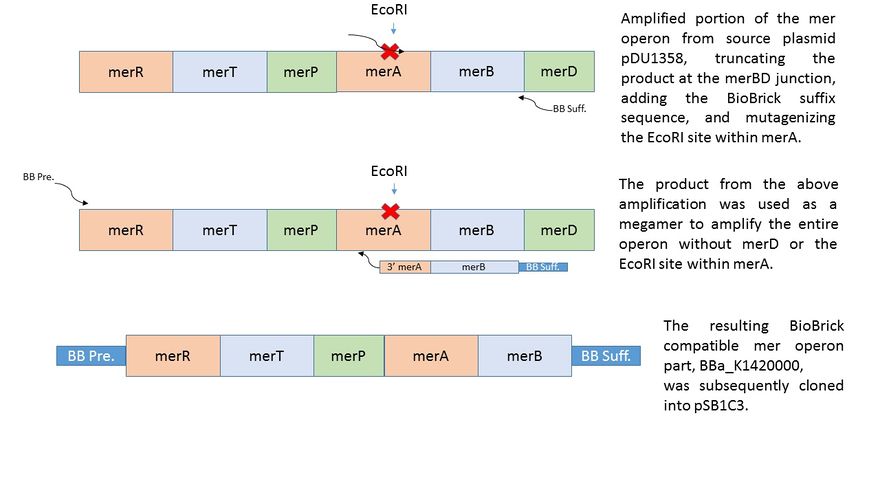 Figure 2. BioBrick assembly of the mer operon. The amplified portion of the mer operon was taken from the source plasmid pDU1358. Since an EcoRI site is required for the construction of a BioBrick compatible plasmid, site directed mutagenesis was conducted on merA due to an EcoRI site present within the gene before the entire operon was inserted into a pSB1C3 vector.

E. coli K12 containing the plasmid with the mer operon (pBBRBB:merRTPAB) had a smaller zone of inhibition than E. coli with the vector control indicating that expression of the mer operon increased resistance to Hg(II) (i.e. allowed cells to grow closer to the Hg(II)-containing disc resulting in a smaller zone of inhibition). E. coli cells harboring the plasmid containing the mer operon with a merA deletion had the largest zones of inhibition among all three strain tested. This result was expected since cells containing merRTPB without merA are able to transport Hg(II) more efficiently into the cell but cannot reduce Hg(II) to the less toxic Hg(0). Therefore, Hg(II) accumulates in cells lacking MerA and hence they are unable to grow near the Hg(II)-containing disc.

These results demonstrate the role of merA in the context of the entire operon. For future directions, we are working to clone merA in a vector containing a different origin of replication than pBBRBB. This way we can express merA in trans alongside pBBRBB::merΔmerA to ensure the part complements the deletion and tests the part more directly. Since expression level of merA is tightly regulated both by MerR and overall position in the operon as a whole, this will likely need to be done using a low copy or inducible vector.

In the context of entire ‘’mer’’ operon, MerT and MerP facilitate ionic mercury transport into cells, and the result of this zone inhibition confirm the function of these two mercuric transport proteins. Without MerA, cells are unable to detoxify/reduce Hg(II) to Hg(0) leading to increased sensitivity, which is reflected by the increased zone of inhibition of K12 harboring pBBRBB::merΔmerA. Increased sensitivity to Hg(II) with merT and merP in the absence of merA indicate that MerT and MerP are functioning together to transport Hg(II) into the cell.

Figure 2 Zones of Inhibition Test For Mercury Resistance. In this assay, Escherichia coli K12 expressing three different constructs was spread on agar plates to compare level of mercury resistance. Each agar plate contained a filter disk spotted with 10µL of 0.1M HgCl2 in the middle. (A) Agar Plates of K12 with each construct. Left, K12 containing pBBRBB::mer (mer operon); center, K12 containing pBBRBB::gfp (vector control); right, K12 containing pBBRBB::merΔmerA(mer operon with merA deleted). (B) Diameter of zones of inhibition. The diameter of the zone of inhibition was measured in triplicate. Green corresponds to pBBRBB::gfp, blue to pBBRBB::merRTPAB, and red to pBBRBB::merΔmerA. Individual constructs range from highest resistance in the following order: merRTPAB > vector control >merΔmerA.

The function of MerB is to convert methylmercury to Hg(II). MerB functionality was demonstrated in the context of the entire mer operon using both silica encapsulated Escherichia coli K12 and unencapsulated E. coli . Both encapsulated and unencapsulated E. coli K12 containing pBBRBB::mer were compared to three negative controls; encapsulated and unencapsulated E. coli K12 containing pBBRBB::gfp (vector control) and abiotic LB medium. Negative controls were used to determine the amount of methylmercury absorbed by beads and the abiotic degradation rate of methylmercury. The experiment was conducted by adding methylmercury chloride to LB at a starting concentration of 1 mg/L. Prior to addition of methylmercury, tubes were inoculated either with 0.5 mL of silica bead-encapsulated cells or inoculated to an OD600 = 0.08 with unencapsulated bacteria from LB overnights. Time points were then taken to determine a rate of degradation of methylmercury. Samples were diluted one-million fold and were analyzed using a Tekran model 2700 Automated Methyl Mercury Analyzer using EPA method 1630 without distillation. This is a highly sensitive and ultra-stable cold vapor atomic fluorescence spectrometry (CVAFS) Hg detector. All quality assurance and quality control measures were taken as outlined in EPA method 1630. All MeHg standards (ongoing precision recoveries) were within the acceptable range averaging 96%.(We were aided in methylmercury measurements by Sona Parska of Ed Nater's Lab - University of Minnesota) </p>

Degradation rates for methylmercury are depicted in Figure 4 for encapsulated bacteria and “Figure 5” using unencapsulated bacteria. The data show that only very small amounts of methylmercury are degraded in abiotic solutions over our time course. Data shows that the negative control, K12 strain containing pBBRBB::gfp, had a more significant decrease in concentration of methylmercury over time when compared to the abiotic control, but is still negligible in comparison to E. coli K12 containing pBBRBB::mer. The mer operon, is seen to remove methylmercury from the system almost completely after approximately 4 hours. At the 8 hour sampling point, methylmercury levels were below detection limits for the Tekran 2700.

From the data, it can be extrapolated that the presence of merB in our pBBRBB::mer construct facilitates the bioremediation and degradation of methylmercury. These results confirm the proposed mechanism of MerB and its function in the cleavage of carbon groups from methylmercury reducing it to Hg(II).In the future, we would like to express merB in trans on a plasmid with a different origin of replication than pBBRBB alongside pBBRBB containing the mer operon with merB deleted. This would allow us to determine if our part could complement a merB deletion strain, and hence test the MerB part more directly. 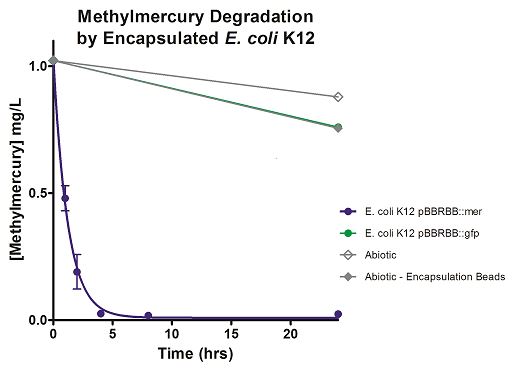 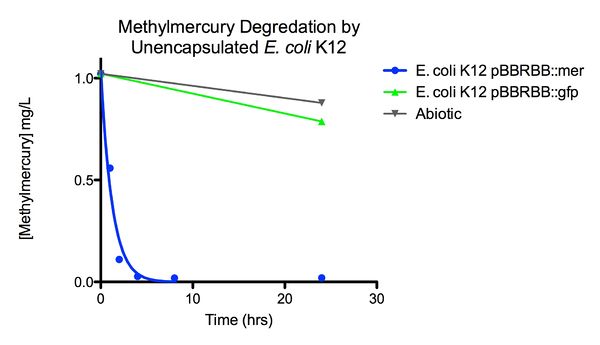