Not Released
Sample In stock
Experience: None
1 Uses
1 Twin
Get This Part

Edinburgh 2015 iGEM team
We improved and expanded characterisation on the part BBa_K1321357, a cellulose binding domain (CBD) submitted by the Imperial College 2014 team. After confirming expression through SDS PAGE we incubated iso-standard paper chads from Whatman 54 filter paper in a crude cell lysate containing the CBD bound to super folded GFP for ten minutes. We then let the protein saturated chads sit in a large volume of 1 x PBS buffer at pH 7.4 (to remain consistent with Imperial’s initial characterisation). At different time points chads were taken from the buffer and placed into a 96 well plate, over 30 minutes. The decrease in fluorescence over time was indicative of relative binding affinity, to Whatman 54 paper. The graph below shows our results. 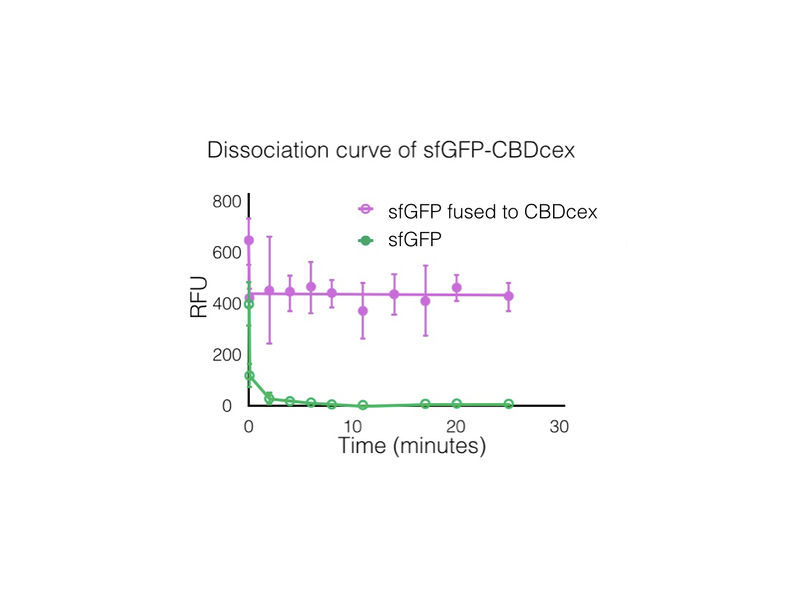 In the Frank&Stain project of the Paris Bettencourt 2016 iGEM team we produced synthetic enzymes to remove red wine stains from fabric. These enzymes are designed to replace perchloroethylene (PERC), a toxic solvent used in dry cleaning that will soon be banned in France. Moreover, we have identified 40 short peptides with affinity for cotton, linen, wool, polyester and silk using the method of phage display. These Fabric Binding Domains (FBDs) were fused to our enzymes with the aim of improving their efficiency and specificity for removing wine stains.
Before attaching our FBDs to the enzymes we had to validate their specificity and binding strength, so we:

To make our results more meaningful and relevant we have used this BioBrick, sfGFP fused to CBDcex created by 2014 Imperial College London team, as a positive control.

We improve the characterization of this part by testing it in different fabrics. In addition to cellulose we also tested the binding strength of this part to cotton, linen, silk and wool, because in the context of our project these fabrics were most convenient.
This part was used in our experiments as a positive control for both expression and binding, since we already knew that the part had worked in previous experiments done by Imperial College London 2014 iGEM team as by Edinburgh 2015 iGEM team.
In our case, as we can see in figures 1 and 2, the experience with this part was very positive. It was expressed successfully, with preserved function and high affinity for cellulosic fabrics, such as cotton and linen. 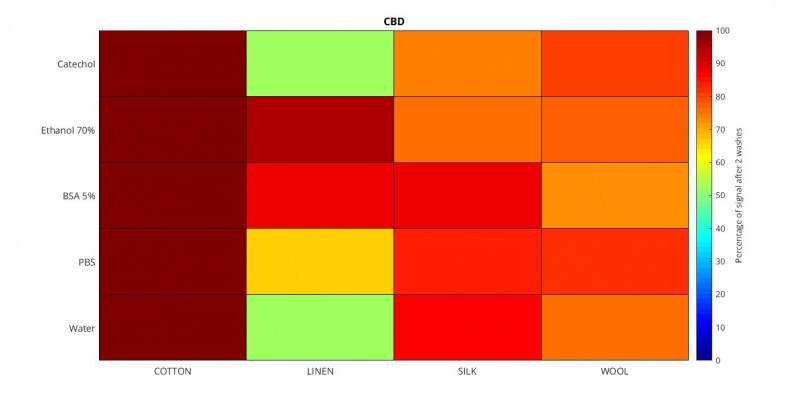 Figure 1 Analysis of BBa_K1321357 Biobrick registry part. Cell extract from E. coli expressing this part was incubated overnight in a 96 well plate with fabric placed at the bottom of the wells. Water, PBS, 5% BSA, 70% Ethanol and Catechol 30mM were the washing solutions used in the experiment to remove the non-bound CBD, as well as to test its binding strength. The data displayed corresponds to the values after the final wash, normalised using the values from the first wash. The intensity of the colour corresponds to the GFP signal measured at that point. Excitation 475nm and emission 515nm. 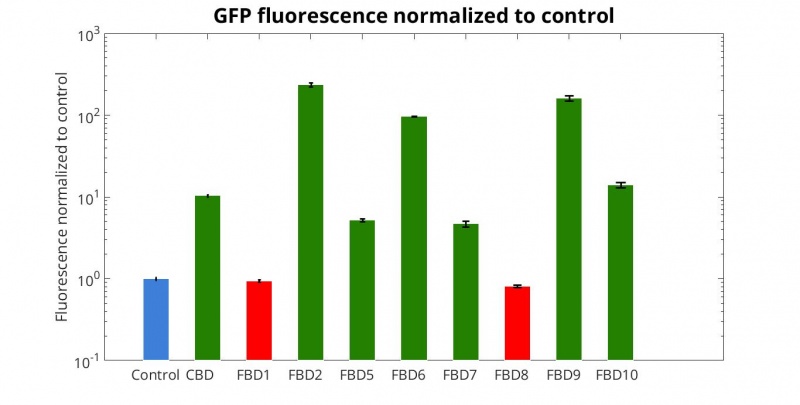