K. rhaeticus iGEM genome was sequenced as a part of Imperial iGEM 2014 project. The genome is approximately 3.4Mbp in size, with a GC content of 63.52% (see Figure 1). Autoannotation using Prokka (Seemann 2014) identified in total 3052 putative coding sequences, 59 tRNA sequences and 24 rRNA and other RNA sequences.

K. rhaeticus iGEM was sequenced using an Illumina MiSeq platform, with paired-end 250bp reads. After quality control and removal of low-quality reads, a total of approximately 0.51*10^9bp of sequenced data remained, representing approximately 150x coverage of the genome. Usually, a 50x coverage is considered sufficient for successful assembly. The full genome sequence as annotated contigs are available here File:IC14 G.xylinus igem genome.zip. This file contains the genome sequence as a fasta file and an annotated gff file (Prokka output, which requires Artemis genome browser for viewing). Note, that these files contain contigs, which are not yet ordered into a scaffold. This is a precaution to avoid misrepresentation of the large-scale organization of the genome, as the genomes of the closest relatives have proven to be inappropriate for scaffolding. This does not however, affect the quality of the sequences themselves. Note that although the iGEM strain was initially thought to be a strain of Gluconacetobacter xylinus, a later analysis using 16s rRNA places it nearest to Komagataeibacter rhaeticus, meaning that iGEM likely belongs to this species. 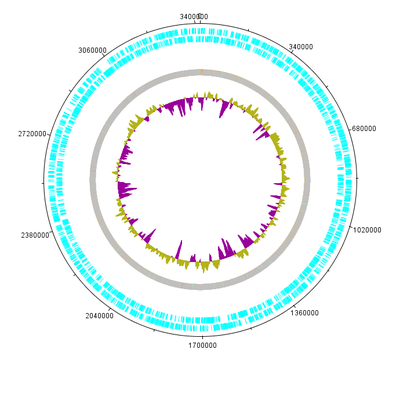 Figure 1. Overview of the genome of K. rhaeticus iGEM. The genome is approximately 3.4Mbp in size, with a GC content of around 63% (internal circle) and approximately 3000 coding sequences (external circle; blue bands denote single CDSs. Note that this overview should be taken as a guide, as further analysis may reveal a more accurate organization of the contigs.

K. rhaeticus iGEM growth rate varies depending on the culturing conditions. Growth rate is highest when K. rhaeticus is cultured at 30degC, 180rpm shaking in a well-aerated setting. However, in shaking conditions, the prevalence of cellulose non-producing mutants (cel- mutants) increases, which causes a decrease in the total yield of produced cellulose. For this reason, when high cellulose production is required, K. rhaeticus is often grown in static conditions, at 30degC, in a well-aerated setting. In shaking cultures, iGEM strain reaches stationary phase in 48-72 hours, whereas in static cultures, depending on the volume of the medium, it can take up to 15 days. When grown on HS-agar plates at 30degC, cellulose-producing colonies become visible within 48-72 hours, cel- mutant colonies between 24 and 48 hours. Cellulose producing colonies can be distinguished from cel- mutants by colony morphology: cel+ have a rough colony morphology, whereas cel- mutants have a smooth colony morphology (see Figure 2). The most commonly used medium for "K. rhaeticus" culturing is Hestrin-Schramm (HS) medium. HS medium contains the following components (for a detailed overview for K. rhaeticus culturing, see G. xylinus culturing on Imperial 2014 wiki: 2% (w/v) glucose 0.5% (w/v) yeast extract 0.5% (w/v) peptone 0.27% (w/v) Na2HPO4 0.15% (w/v) citric acid. 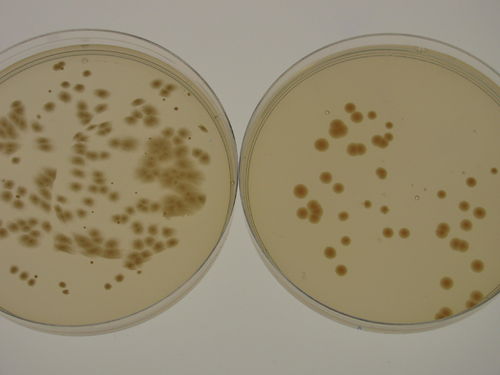 Figure 2. Different colony morphologies of cel+ and cel- G. xylinus ATCC 53582 colonies - these are highly similar to K. rhaeticus colonies in morphology. Cel+ colonies have a rough colony morphology (left), whereas cel- have a smooth colony morphology(right). Plates were inoculated using 50µl of seed cultures grown to stationary phase, and incubated inverted at 30C for 8 days.

Error creating thumbnail: Invalid thumbnail parameters
Figure 4. Natural antibiotics resistance of K. rhaeticus iGEM and G. xylinus ATCC 53582 strains. Due to small colony diameter and large clustering, colonies were rounded to the nearest hundred, if more than a hundred colonies were present. Plates with over 500 colonies often formed a lawn. Plates were seeded with 50µl of ATCC and iGEM seed culture normalized to equal OD600, and grown inverted at 30degC for 5 days until colony counting. N=3, error bars denote SD.

We tested 9 different plasmid backbones previously not known to replicate in Acetobacteraceae - pSEVA311, pSEVA321, pSEVA331, pSEVA341, pSEVA351, pBla-Vhb-122 (from Chien et al. 2006), pBAV1K-T5-sfgfp, pSB1C3 and pBca1020 (part number BBa_J61002) in order to create a set of plasmid backbones with different copy numbers for K. rhaeticus genetic engineering. We used pBla-Vhb-122 as the positive control, as it has been previously shown to replicate in G. xylinus (see Chien et al. 2006). In order to test for replication, we prepared electrocompetent cells (see Preparing electrocompetent cells) and transformed using 33µl, 50µl and 100µl of electrocompetent cells and 50µg, 200µg and 500µg of DNA (see Transformation of G. xylinus using electroporation). Transformants were plated out on 4 different antibiotic concentrations for each transformation: 0.5x, 1x, 2x and 6x concentrations (this refers to concentrations of antibiotics commonly used for E. coli, which are 50µg/ml kanamycin, 100µg/ml ampicillin and 35µg/ml chloramphenicol). Transformed colonies could readily be achieved. Colonies were then inoculated into HS-cellulase medium and grown for 3 days shaking at 180 RPM with appropriate antibiotics, after which plasmid DNA was miniprepped using the QiaPrep Spin Miniprep kit, according to manufacturer's instructions. Miniprepped DNA was then used as a template for PCR to determine plasmid-containing colonies. Primers used for PCR had been previously verified with pure plasmid DNA. DNA sequence of successfully amplified plasmids were confirmed by Sanger sequencing.

We discovered that 5 out of the 9 tested plasmids - pSEVA321, pSEVA331, pSEVA351, pBAV1K and pBla-Vhb-122 (as the positive control)- were capable of replication in both K. rhaeticus iGEM (see Figure 5). No positive results were obtained for other plasmids. As we tested multiple antibiotic and DNA concentrations, this indicates that the rest of the plasmids can not replicate in K. rhaeticus due to incompatible origin of replications. We converted pSEVA321 and pSEVA331 into a biobrick-compatible format by inserting the biobrick prefix and suffix in place of the original multiple cloning site using PCR with mutagenic primers and are currently in the process of converting pSEVA351 and pBla-Vhb-122 (converting them into biobrick format has required more time, as they contain several forbidden restriction enzyme sites requiring multiple steps of mutagenesis). pBAV1K was already engineered to be biobrick compatible by authors. We have also verified replication of all of these plasmids in E.coli. Thus, we have determined 5 new plasmid backbones that can act as shuttle vectors for K. rhaeticus genetic engineering: 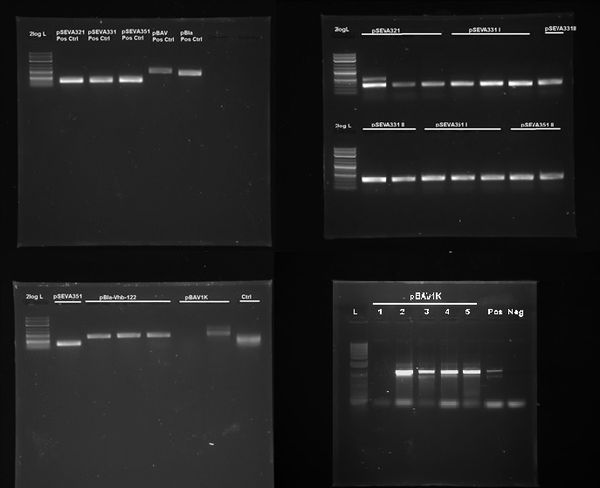 NOTE: Because the registry's standard plasmid backbone pSB1C3 is not capable of replication in Acetobacteracae species, the K. rhaeticus genetic engineering toolkit is housed mainly in pSEVA331-Bb. pSEVA331-Bb is a non-standard backbone, which therefore can't be quality controlled by and maintained in the Registry. However, in order to make the K. rhaeticus toolkit available for the synthetic biology community, Imperial iGEM 2014 team has made it freely available upon request, with quality control provided (see Experience). To request, please contact Imperial iGEM 2014 team.

The genome sequence revealed several interesting aspects about the biology of K. rhaeticus iGEM. First, a 16S rRNA phylogeny suggests the iGEM strain to be a previously unidentified strain of K. rhaeticus, rather than G. xylinus, which is normally thought to be associated with Kombucha tea. 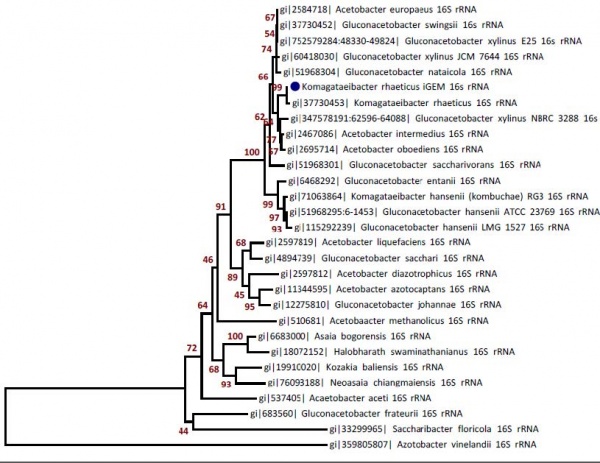 Figure above: 16s rRNA phylogeny of K. rhaeticus iGEM with 29 Acetobacteraceae species. Blue dot indicates the iGEM strain.
Although the strain was initially described as Gluconacetobacter xylinus by the providers of the Kombucha culture, the phylogeny instead places the iGEM strain closest to Komagataeibacter rhaeticus. This is supported by the high percent identity (99.93%) between the iGEM and K. rhaeticus 16S rRNA, which together indicate that iGEM is a new strain of K. rhaeticus. Nucleotide sequences were aligned and percent identity calculated using MUSCLE and the tree was generated using the Neighbour-Joining method. The tree is drawn to scale, with Bootstrap values from 1000 replicates shown next to the branches. Nucleotide sequences and all positions containing gaps and missing data were eliminated. Analyses were conducted in MEGA6 package.